by Ryan Davis on October 22, 2008
Share:TwitterFacebookReddit

The original Saints Row didn't always benefit from comparisons to the Grand Theft Auto series, though with Saints Row 2, it's apparent that the two franchises are going in two very different directions. As much as it is a sequel to Saints Row, this is the logical extension of Grand Theft Auto: San Andreas, more so than GTA IV, and not just because of the similar street-gang premise.

The game picks up several years after the end of Saints Row, where your character was apparently blown up in a boat explosion. You wake up from your coma with a new face and with the city of Stilwater being overtaken by the oppressive Ultor Corporation, which has turned the gritty Saints Row area into a quasi-futuristic glass-and-steel paragon of corporate greed. The rest of the game focuses on you getting the Saints back together, taking down the other gangs of Stilwater, and eventually, Ultor itself.

Aside from the appearance of a few returning characters, Saints Row 2 doesn't really bother to resolve anything from the first game, which makes its overly familiar references to past characters and events that much more confusing. There's a fair amount of celebrity stunt-casting in Saints Row 2, which can make it difficult to separate the character from the actor. This was most noticeable for me with Michael Dorn as the insane biker Maero, though I won't deny getting a kick out of going up against a dude who sounds like Worf.

While GTA IV strove for dramatic weight and verisimilitude, Saints Row 2 instead tries to pack in as many ridiculous activities as possible. The main missions concern you with taking out rival gangs, and while this can be as simple as wasting a building full of dudes, sometimes you'll have to blow up the building itself, or at least fly a helicopter into it. To take on these primary missions, you've got to have a certain respect level, which you can build up quickly by taking on the occasional side mission. These can include performing insurance fraud by taking a dive in front of a moving car, lowering property values by spraying sewage, running drugs, protecting prostitutes, impersonating an officer, and riding a flaming ATV through the city streets, setting off explosions.

There are are also some ridiculous diversions, such as streaking, basejumping, anonymous bathroom sex, and car surfing. Not all of these side activities are winners, but there's enough variety that you're never stuck grinding on an activity you don't much care for. In a different context, a good amount of the stuff you can do in Saints Row 2 would seem fundamentally abhorrent, but the florid visuals and campy tone neutralize any potential for seriousness.

You'll earn some scratch running these missions, though real estate is the best way to build your fortune. You'll gain turf as you take out your enemies, and you can also buy an interest in any shops in your territory. These investments pay back dividends on a daily basis, and it doesn't take long for them to start racking up, to the point that money isn't much of a concern at all.

You can eventually take over the entirety of Stilwater, but Saints Row 2 is less concerned with creating a living, breathing world than it is with providing you with a giant sandbox to go nuts in, and the character creation is pretty indicative of this mindset. You can choose from a number of different fighting styles and elaborate rude gestures, and there's no stopping you from mixing male and female body parts and wardrobe. If you're at all unhappy with how your character's looking, you can drop into one of several plastic surgeons and change everything. You can also customize the look of the Saints with some pretty absurd results, and there's no denying the stupid appeal of seeing a half-naked man in a safety vest and a mosquito mascot mask rolling around with a gang of ninjas.

For all its shaggy, kitchen-sink charm, Saints Row 2 has got some problems, many of which are residue from its predecessor. The original Saints Row was partially impressive simply because it was the first real open-world game on this generation of consoles, but it's now two years later and Saints Row 2 doesn't look a whole lot better. The city of Stilwater is expansive and full of little details and secret areas to discover, but the draw distance isn't always great, and there's something about the lighting that leaves the game looking kind of flat. The frame rate mostly holds up, though there was a mission where I had to defend a large ship against waves of helicopters and boats full of dudes, and the combination of smoke effects and general activity brought the game to its knees. It can be a little buggy with the artificial intelligence, physics, and collision-detection systems, but to its credit, Saints Row 2 is liberal enough with checkpoints during missions that you rarely feel like a victim.

While GTA IV went on to include the incredibly useful GPS navigation system first seen in Saints Row, Saints Row 2 still has a few unique tricks up its sleeve. The gang system allows you to roll around with a posse of disposable, computer-controlled gang-bangers. They have a tendency to get stuck in doorways, but they're pretty good at following your lead, and if you hop into a vehicle that doesn't have enough seats for your posse, they'll jack a nearby vehicle to keep up. There's also the cruise control option, which lets you maintain your speed without holding down on the gas, making drive-bys and highway mayhem easier to pull off.

You can play through the 20-plus hours of Saints Row 2 on your own, but the game also has a solid co-op feature that allows another player to jump into your version of Stilwater at any time. It doesn't change any of the narrative bits to reconcile the presence of two protagonists, and that can be a little awkward, but aside from being hindered by lag on a particularly fast-paced mission, I found co-op to be good fun.

There's no question that GTA IV is a better game than Saints Row 2, but in some ways, Saints Row 2 is more fun. Saints Row 2 doesn't look nearly as good, and there aren't any heavy moral choices or resonant melodrama, but the cars handle more easily, cops are less of a concern, enemies are easier to kill, and the activities are generally crazier and more over-the-top. If GTA IV got too serious for you, Saints Row 2 might just be what you're looking for.
Load Comments 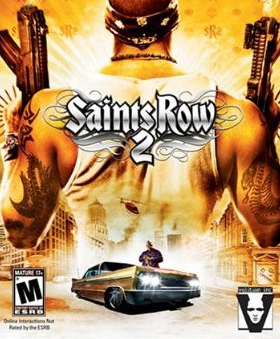