by Alex Navarro on November 11, 2011
Share:TwitterFacebookReddit

There was a time when you could reasonably call Saints Row just another Grand Theft Auto clone. Specifically, it was around the time the first game popped up, when it was clear that developer Volition was essentially just aping whatever it had learned from Rockstar's open world crime simulator for the sake of its own nefarious means. If Saints Row was the awkward adolescent phase--the period spent emulating the things you think are awesome as opposed to doing anything particularly original or inventive--then Saints Row 2 was the franchise's college years, where Volition spent its time experimenting wildly and "finding itself," as it were. Hints of what was to come were certainly there, but it was still only half-explored, unsure of itself, and not quite ready for adulthood.

Saints Row: The Third finds the series all grown up. Not in sense of humor, mind you (very much the contrary there), but simply in confidence, wisdom, and overall comfort in being very much its own thing. Whatever similarities Saints Row: The Third might have to the GTA series at this point are purely mechanical. In truth, it has more in common with the imaginary game every obnoxious parent group, pandering state senator, and hack activist lawyer believed Grand Theft Auto was during those tumultuous San Andreas years. It's Grand Theft Auto filtered through the mind of a fucking lunatic, pushed to boundaries of ludicrousness that make things like giant dildo clubs and man-launching cannons seem altogether reasonable compared with much of the other batshit nonsense going on in here. In a sense, Volition has succeeded in making the mayhem and murder simulator that Rockstar never even tried to make in the first place, and it's hard to argue that we, the video gaming public, aren't better off for it.

Whereas Saints Row 2 had a bit of trouble marrying its plot to the previous edition of the game, Saints Row: The Third defeats that problem by simply refusing to care. Yes, there is a story involving your gang (the titular Saints) and an encroaching United Nations of gang violence from a nearby town called Steelport. Headed up by a Karl Lagerfeld-esque Belgian dandy and a pair of twin sisters in turtlenecks (at least one of whom is voiced by former porn actress and now sort-of real actress Sasha Grey), the Saints are delivered an ultimatum: turn over 66% of their profits to the evil Syndicate, or get smoked. Unsurprisingly, Johnny Gat, Shaundi, and your own nameless "boss" character aren't having that, leading to an insane gunfight inside of a cargo plane flying over Steelport that results in multiple bouts of shooting while parachuting, at least one sequence involving crashing through the windshield of the aforementioned plane just to shoot one dude, and a few pleasantly racist Belgian jokes.

All of that, plus a delightfully in-jokey bank robbery sequence inside of the opening 30 minutes. There is plot explained in there somewhere, but most of it is lost amid the genuinely funny throwaway one-liners and endless gobs of insane action thrown directly at your eye sockets. And if you have any intention of playing through all of Saints Row's various story and side missions, you've got about 16 more hours of that kind of crazy coming your way, multiplied by several orders of magnitude.

I'm not trying to dismiss Saints Row's story out of hand--it just isn't important in the grand scheme of things. It's very funny, with some strong voice acting from its cast, which also includes the likes of Hulk Hogan, Daniel Dae Kim, and Burt Reynolds as himself. There's a number of good parodies of annoying video game tropes over the last few years (the modern war on terror, and zombies, just to name a couple), not to mention a few older ones (it's best if you discover those for yourself). But understanding of the plot isn't a requirement toward enjoying Saints Row: The Third. It doesn't matter if you've ever played one of these games before. All that matters is that you enjoy unadulterated chaos--specifically, causing lots of it.

Saints Row: The Third is generally at its best when you're blowing up, shooting, or delivering running clotheslines to just about anything. As an open world, Steelport is probably the worst place you could possibly live in America, what with the preponderance of purple-clad assholes running around dropkicking you in the back of the head and beating your skull in with depressingly over-sized dildos. The sheer variety of stupid, stupid weaponry Volition has laid at your feet in this game is nothing short of a gift for destruction junkies everywhere. Ever wanted to explode a bad guy into a cloud of bloody vapor with a single blast of a sonic boom? Ever had the itch to incinerate random citizens with a futuristic laser/flamethrower shot from a goddamn future jet? Ever said to yourself, "Man, beating people with my fists is awesome, but wouldn't it be so much more awesome if they exploded for absolutely no reason when I did it?" Then friends, does Volition ever have a video game for you.

One of the best things about Saints Row: The Third is that it actually manages to fuse the incoherent violence into its story remarkably well. Story missions, as well as many of the various side ventures, actually require you to lay waste to all that stands before you, only this time it's with a purpose, and not just for morbid giggles. Mayhem missions, insurance fraud (where you essentially turn yourself into the human version of the Showtime mode from Burnout Paradise), and helicopter assaults all play directly into your takeover of Steelport while also being completely bonkers.

Story missions obviously have a bit more structure to them, but are no less insane for it. The writers at Volition have done a great job beefing up Steelport's rival gangs into ridiculous, out-sized caricatures that not only deserve the hot blasts of dildo-oriented death coming their way, but also lend themselves to particularly great boss fights and specialized levels that range from TRON-esque cyberspace battles to a straight-up pay-per-view wrestling match that's...well, again, it's better if you discover it for yourself.

Even outside of missions, every piece of terrible destruction you rain down on the citizens of Steelport contributes to your respect meter, which is more or less your earned experience throughout the game. Leveling up unlocks new bonuses that range from simple ability upgrades, to gang-oriented bonuses that earn you more cash and/or respect. Cash lets you upgrade additional things, like your various strongholds around the city, as well as your weaponry. You'll definitely want to, as the upgraded guns are far more fun than the base-level ones. You ain't lived until you've juggled a lifeless corpse in upwards of 30 seconds with your level four dual-wielded silver pistols.

Volition touts Saints Row: The Third as its most ambitious game, both technically and from a gameplay perspective, and in truth, the end product shows exactly that. Without getting too tech-speaky about it, The Third is easily the best-feeling Saints Row game yet, and arguably one of the best-feeling open world games I've ever played. The combat is remarkably tight, both in gunplay and in melee combat. I often find melee combat in games like this a terrible afterthought, but here it's actually a delight. Vehicles also feel pretty great, mixing absurd physics with a relatively tight handling that makes driving around Steelport a joy, rather than an abject chore.

That said, not everything on the technical side works quite as it should. Saints Row: The Third is not devoid of bugs, even after installing an early patch on consoles. Crash bugs during loading screens I experienced effectively stopped after the patch, but glitches during missions continued to pop up, especially during side missions after restarting them. On a few occasions, enemy/compatriot AI would simply cease to function, allowing me to just kill a bunch of dudes without even trying. Elsewhere, I ran into a pair of weird instances where the game's world streaming simply ceased, and I found my character dropping through roads into some kind of abyssal void where world textures and nothingness combined into a kind of modernist hodgepodge of crashy craziness. The good news is that Saints Row: The Third autosaves often, so you rarely lose much progress when stuff like this occurs. And hey, if you're the sort that finds these kinds of glitches the video game equivalent of performance art, you're in for a treat.

I haven't even gotten into the multiplayer aspects of Saints Row: The Third yet, largely because they're the least-compelling facets of the game. Competitive multiplayer is pretty much out altogether, and in its place comes the Whored Mode. Awful, awful title aside, this is essentially the Horde mode from Gears of War, with waves of zombies, luchadores, sexy nuns, weaponized furries, and whatever the hell else coming at you in various rounds of combat. It's a perfectly fine distraction that can be played online or locally with friends, but it's not really the sort of thing you'll keep coming back to long after the campaign is complete. Instead, you might opt to go back and play through the campaign again in co-op. This works functionally as it did in SR2, and despite the fact that the story never really acknowledges that there are now two players instead of one, it's still great to blow things up alongside a friend.

With all of these things in mind, I respect that Saints Row: The Third might not be a game for everyone. Specifically, those who do not find joy in the act of inflicting terrible, fiery, dildo-y pain on whatever innocent polygonal creature happens to wander too close to their personal blast zone will probably not get much out of Saints Row's unrelenting dedication to preposterous anarchy. It is a game specifically designed for annihilation junkies, those who can embrace the idea of an infantile playground of seemingly infinite obliterative pleasures. For those who prefer their games a tad less absurdly--perhaps needlessly--violent, any number of other games this fall will likely suit your fancy just fine.

As for the rest of us? Saints Row: The Third is practically catharsis on a disc. Go forth, and have a blast. 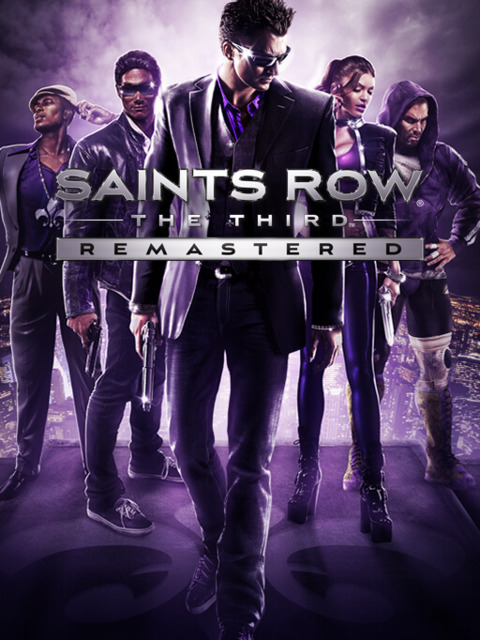