Shadows of the Damned Review

by Alex Navarro on June 21, 2011
Share:TwitterFacebookReddit

Shadows of the Damned is a hell of a good time.

When it was announced that Japanese game development luminaries Shinji Mikami, Suda51, and Akira Yamaoka were teaming up for a secret project, hands began to wring in anticipatory glee at the possibilities of what this embarrassment of creative talent might concoct. After all, the last time Mikami and Suda51 got together, the product of that pairing was the cel-shaded oddity Killer7. Given the work each of them has done since that bizarre experiment, the addition of Yamaoka's aural sensibilities, and the trio's relatively newfound independent freedom, why wouldn't your mind start racing to try and think up what out-of-left-field first bounty this fantasy team-up would bring to bear?

Okay, so maybe Shadows of the Damned isn't quite the out-of-left-field product of unchecked creativity some of us might have initially wanted from this particular supergroup. In fact, on the supergroup scale, it's more like that one Temple of the Dog album, a concept that might be completely within the usual wheelhouse of everyone involved, but is still a damn good example of what these guys have repeatedly proven themselves capable of. It's a game full of viscerally satisfying shooting, plenty of blood and guts, a totally off-kilter storyline, and some legitimately excellent audio running underneath the surface. It's a known quantity, but one that feels almost as high as the pedigree that spawned it.

Shadows of the Damned tells the tortured tale of Garcia Hotspur, a preternaturally badass demon hunter who finds himself running up against one severely pissed off pervert demon named Fleming, who hasn't taken too kindly to Garcia's chosen profession. Garcia returns home after a particularly rough night of demon-slaying to find his special lady dangling from a noose, and Fleming in possession of her soul. Fleming, cutting to the chase, makes repeated threats to defile Garcia's lady in ways that would make Duke Nukem's exploits seem puritanical by comparison. Thoroughly in love and totally irritated by this inconvenience, Garcia leaps into Hell to save his beloved, and perhaps murder a few "hell monkeys" in the process.

Before we go any further, a note of import: right from the get-go, you're probably going to hate Garcia a little bit. His personality seems equally lifted from John Constantine, El Mariachi, and Jack Burton, and he has all the cheesy one-liners and moments of broody extremeness such a description comes encumbered with. That hate won't last, fortunately.

It's just that Shadows of the Damned takes a little while to find its groove. Suda51's sense of humor is a... divisive thing. You're either on board with his anarchistic, abstract sensibilities, or you're all the way not. At first, it feels like the game is challenging you to keep playing, what with its opening salvo of lame dick jokes and spine-crinkling one-liners. But bit by bit, the story begins to boil, and actual charm begins to spill out. Not long after Garcia enters Hell, the game morphs into a kind of weird buddy comedy, with Garcia facing increasingly bizarre circumstances that Johnson, his British-accented, flaming skull of a sidekick (who also happens to take the form of Garcia's demon-slaying gun) is more than happy to try and explain in his cowardly genial way.

There's a peculiar chemistry to Garcia and Johnson that carries the game and its oddball story along. The actors voicing the pair certainly deserve a lot of the credit, but Suda, along with his script translator, each deserve quite a bit, too. For all the profanely adolescent humor the game contains, there's also a shocking amount of nuance to it. There's a pace and a flow to the story that, contrary to some of Suda's other works, doesn't feel like it's punching you in the face with nonstop, hyperactive nonsense. For every puerile piece of dick-related innuendo and weird bit of Internet culture nudge-and-winkery, there are as many moments of creative comedic storytelling that actually surprise you. For instance, try checking out one of the several storybooks randomly scattered throughout the game, and listen as Johnson and/or Garcia read aloud the demented back story of one of the game's many boss demons. These sequences stop the game dead in its tracks, and yet the writing and acting is so sharp that you won't even care.

Which isn't to say you won't care about the action; just that you might not care quite as much. As a shooter, Shadows of the Damned is largely serviceable, though it periodically flirts with brilliance. The game's third-person, over-the-shoulder perspective feels loosely assembled from Mikami's design work on Resident Evil 4, except with the added bonus of being able to move and shoot at the same time. Revolutionary, right?

The word for the combat is, "satisfying." The guns aren't overly thrilling, but the damage they cause is nice and disgusting. Blood, guts, and other, inexplicable grossness fly in great quantities, and the demons, while not the most creatively designed hellspawn you've ever seen, at least do you the service of suffering pleasurably. You've only a handful of gun types to play with, but as you progress, you'll gain access to a nutty array of Johnson upgrades that deal quite a bit of gruesome damage to the various demonic forces out to get you.

Even the boss battles, often the Achilles heel of these sorts of action games, are an enticement. Though they rarely transcend the usual pattern-focused battle mechanics we've all played to death, they're nonetheless creatively designed, well-paced battles that only periodically frustrate. If you can't appreciate the act of fighting a man with the head of a goat riding a horse with the head of a man, I don't think Shadows of the Damned is the game for you.

For the most part, Shadows of the Damned is a game that qualifies as challenging, not frustrating. Occasional bouts with irritating arena battles featuring insane droves of enemies notwithstanding, the game's design mostly allows for a breezy, if not easy shooting experience, thanks in no small part to the mostly solid checkpoint system. The one wrinkle in the gameplay that occasionally vexes is the "darkness" mechanic. In the vein of Silent Hill, Hell will sometimes go massively, oppressively dark, turning everything to a chaotic bluish hue and actually inflicting damage on Garcia.

These sequences usually involve finding light sources to blast with your gun, or darkness-barfing zombie hands to destroy. It's rarely too difficult to find the right solution, though that does bring up the matter of the game's puzzles, or general lack thereof. Shadows of the Damned is a linear game. Linear is not inherently a damnable term, but here it very much is. This is not a game that requires much thought. When a door is locked, an icon on the door tells you what you need to do. Sometimes you blast it with light. Sometimes you kick it in. Sometimes you have to go find a strawberry for a demonic baby head that acts as a lock. If you do have to go do something like find a strawberry for a demonic baby head, that strawberry is usually pretty close to the demonic baby head, possibly in that one other accessible room right next to the demonic baby head.

In other words, there just isn't much need for brainpower in Shadows of the Damned. Mostly it's all run-and-gun demon-splattering, which for many will be just fine. What you might be less fine with is some of the game's rougher edges. Some of these are technical, including a few irritating glitches that forced me to restart a couple of checkpoints, and some long-ish loading times that periodically pop up and cause initial choppiness with cutscenes. Other issues are atmospheric in nature. While Hell should certainly be an ugly place, a lot of Shadows of the Damned's environments are drawn up in strangely bland fashion. Hell is basically a nondescript European city peppered with hollowed-out corpses and gooey human viscera. The latter gore actually looks pretty good, but much of the world detail is uncreative and overly dank. The notion of Hell as a rather dull community of demons wandering around torturing each other out of a lack of better options is kind of a funny one, but as a visual gag, it just serves to make the game's presentation less interesting.

Still, there are some amusing artistic touches. The demon who acts as your weapon salesman, for instance, looks like a giant, hulking Wendigo with a fondness for flood lights, and also talks like Gomer Pyle. Again, a lot of what works in Shadows of the Damned comes from the audio, especially in the campy, bizarre voice acting. Yamaoka's music deserves special mention, too. He runs the gamut from the ethereal to the cacophonous here, mixing dirges of grindcore screeching with dread-filled strings, and finding the occasional opportunity to toss in some Spanish guitar solos for good measure. It's ludicrous stuff, but it perfectly suits its ludicrous game.

Some are guaranteed to hate Shadows of the Damned. It's unapologetically immature, boner-obsessed, and grotesquely violent. And yet, unlike other unapologetically immature, boner-obsessed, and grotesquely violent games of recent memory, there is no meanness of spirit to Shadows' intentions. Practically every gag in the game seems to come from a place of easygoing silliness, rather than a need for forced edginess. For a game about Hell and damnation, it's remarkably fluffy and light of spirit, to the point where you just can't help but laugh at the wanton stupidity of it all. That it sometimes stumbles in its execution is a testament to how entertaining its tale really is. Even at its worst moments, you'll be compelled to keep playing.

Unless, of course, you just really hate dick jokes. 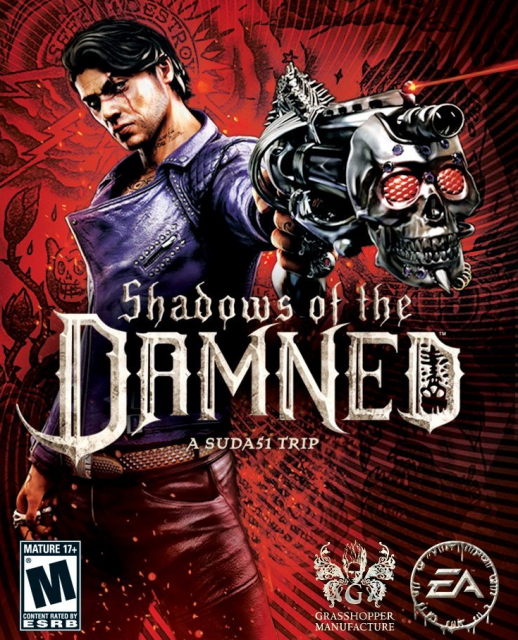