by Alex Navarro on March 6, 2013
Share:TwitterFacebookReddit

SimCity offers up myriad tantalizing delights for the would-be city-builder, but encases them in an infrastructure that feels at odds with itself.

To talk of this game is to tell a tale of two SimCities. On one side of the border is a brilliant, vibrantly realized reboot of Maxis' classic SimCity franchise. After a 10-year break, here is a game that presents the modern city builder with nearly every possible tool one could hope for to build the bustling metropolis of their dreams. It is gorgeous to look at when properly taken advantage of with the latest PC hardware, artfully designed for minimal user interface turmoil, and just exquisitely charming across the board. Across the border, however, is another SimCity entirely. This one is a stricter game than the one franchise fans have come to know over the years, one more dedicated to a single-minded way of cooperative thinking. In this SimCity, a single city cannot survive without another nearby to pick up the slack. Multiplayer is heavily encouraged, to the point of insistence, and yet the safeguards that aim to prevent problematic behavior on the part of others are minimal, and frankly unreliable. Which is to say nothing of its overall, online-always infrastructure, one which has, at times already, hamstrung the entirety of this new SimCity's lush, yet disappointingly underutilized region.

Understand, SimCity is extremely capable of being the grand reboot of the series it aims to be, at least in spurts. The core act of city-building, which has been using most of the same basic ideas since its inception nearly 25 years ago, has rarely been more elegantly realized. The tools to build with are numerous and overwhelming. Of course you will start out your new city by laying down zones for residential, commercial, and industrial, perhaps by building a couple of city services, plopping down (to use the game's parlance) a power plant, and then a water tower, and then a garbage dump, and it just goes on. Every building option you have comes with option upon option underneath. Do you spend the money now on a single police station, or do you save up for the bigger, more all-encompassing precinct? Do you want a simple BBQ pit park, or a giant fountain sculpture to really boost land value? Is your hospital running out of room for sick patients? Why not just build another row of patient rooms on what you've already got?

Half the fun of SimCity is just trying to figure out the best, most efficient ways to build everything. And this SimCity often scratches that itch wonderfully. It even offers tremendous flexibility in the design of your city, both from a geographical standpoint, and in terms of economy. To the former, roads can now be curved, built in circles, perfect blocks, really whatever you like. Roads are upgradable too, so a small avenue can become a large commercial one later on.

More interesting are the city specialties, special economic focuses that allow you to build, say, an oil pump or two if your land is rich in fossil fuels. Or perhaps tourism, if your interest pertains to building famous landmarks (some of which can be bought via the game's DLC store). Or, if you just like making money, there's always the gambling route. These specialties provide an extra layer of challenge, in that you kind of have to build your city around them, as opposed to just deciding on them later. Otherwise you'll spend a lot of time bulldozing and rezoning things as you try to figure out how to squeeze an ore mine into a residential neighborhood.

Maybe I'm alone on this one, but one of my favorite things about the old SimCity games were the stupid charts you could look at to see where crime was prolific, how property values varied across my city, who was happy or displeased with my mayoral performance, and such. Even if you don't understand me, this SimCity does. There are graphs upon charts upon data screens to play with, all giving ample information on every aspect of how my city is running. It's beautiful stuff, though it's also occasionally bogged down by sloppy data reporting. Often times fixing problems within my city, like sewage outflow issues or power outages, would result in continued displeasure from my citizens for quite some time. This can sometimes make it difficult to judge whether you've actually solved the issue or not.

Far more problematic than any of that, however, is really the other half of SimCity. It is the multiplayer, the skeletal structure in which the city building meat of the game has been somewhat awkwardly stuffed into. At the outset of every game, you are asked to pick a region. Right from the get-go, you can choose to join an already existing region, which has been started by another online player, or create your own. Once in a region, you can choose to be the mayor of as many of the city plots as you please, but there are always multiple plots, and to leave a whole region unused puts a burden on your city that the game isn't designed to alleviate through single-player play.

Essentially, SimCity doesn't really want you to have one city that has all available services and resources. As with the city specialties, there is significant financial and strategic benefit to having one city that's, say, more apt to house polluting industrial factories, or garbage dumps. Such a city might not have a huge residential population, nor much potential for high land value items, but it can make money by housing jobs that citizens in other cities can commute to, and even by housing other cities' garbage.

This cooperation becomes crucial, as there really isn't enough money, nor space to allow one city to bear all the major burdens at once. That last point is a particularly stinging one. Regions are broken up into squared-off city areas within a larger area of land. In between the cities are vast zones of dead space that essentially just exist to make the region look more natural. While it certainly can take a while to fill up an entire plot of land--especially in areas rife with mountains or plateaus--you will eventually fill it up. The game goes out of its way to try and help you build using the most efficient layouts possible, even offering a road guide that shows you ideal places for streets and avenues. But even following the guides stringently, you'll eventually run out of room, leaving you to try and squeeze whatever zoning density you possibly can out of every little corner you own. There is probably a very good technical reason for why you can't use any of that extra land, but it is nonetheless a terrible tease.

Yes, it is entirely possible to play SimCity on your own, without any other players, but this is not really ideal. If you're managing multiple cities in a region, that turns an already intense time suck into a more stressful endeavor. I did not enjoy the act of trying to balance multiple cities in a region by myself. Don't get me wrong, I'm generally of the mindset that games like SimCity should be played in tomb-like isolation, but that isn't how this SimCity is meant to be played. It's meant to be played with friends. To try and fight against its multiplayer is to fight against the very nature of this game's design.

The thing of it is, if you can get a group of enthusiastic players together, the kind you know won't do dickish things, like polluting your region to death, or harboring scads of murderers in their dilapidated hellhole of a town, SimCity works. As weird and awkward as it seems at first, the more you play it under ideal conditions, the more clear Maxis' vision for this game becomes. It's almost like a kind of social experiment in cooperation, albeit one that is perhaps a bit too open to exploitation. While you can't just go in and wreck anyone's city wholesale, there are smaller, more insidious things players can do to royally screw up someone's region, and don't think there won't be those people. Of course, you can always set your game to private, making sure that only friends and likeminded individuals can join. But if my experience has been any indication, those safeguards aren't terribly reliable right now. I had one early region set to private, and then after a bit of server wonkiness, it had become infested with unfamiliars.

Granted, that is an issue that may have just been the result of launch jitters on EA's servers, but this brings us to the biggest flaw in SimCity's design. SimCity is an always-online game, meaning if the servers are off, everybody's game is off. EA calls SimCity's multiplayer asynchronous, and that's partially correct. There's nothing that requires players to be on at the same time to play. However, we do all have to be able to connect to EA's servers to play. Yes, even if you just want to noodle around in your own city and don't care an iota what's going on in the larger region today, you can't load up your city data if the servers are down. And the servers have been down. Several times, in fact, since the game launched this past Tuesday. A week from now, these concerns might not even be justified. The servers could be back up and work flawlessly forever a minute after this is published. Regardless, this underlying philosophy, one that dictates that if everyone can't play, then no one shall play, is a troubling one.

It is therefore difficult to completely reconcile a game like SimCity. This is a game with startling clarity of vision, but that vision often feels narrow and intractable. It knows precisely what it wants to be, and in most key ways, executes on those ideas with precision. But in setting that course, it all but dismisses the way in which many played SimCity sequel after sequel. And while I expect many will fall head-over-heels in love with this SimCity's cooperative design, at its best, the game feels more like a really thoughtfully designed multiplayer mode for a larger, single-player capable game that, sadly, doesn't exist. Go in with the right expectations, and there's a good chance you'll enjoy your time with SimCity. Assuming, of course, EA's servers will let you play it in the first place. 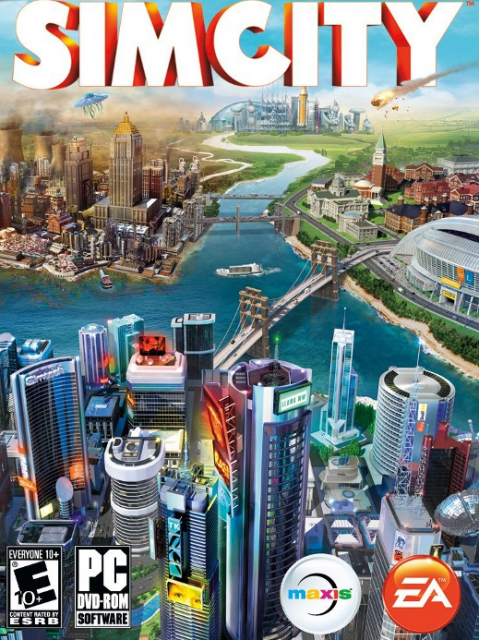