by Jeff Gerstmann on June 29, 2012
Share:TwitterFacebookReddit

Spec Ops: The Line is a mostly standard shooter with its share of rough edges, but it handles the subject matter of armed conflict in some extremely interesting ways.

Spec Ops: The Line is a standard cover-based shooter with a modern military theme. You hide behind stuff, do a little blind-firing, toss a grenade or two, and shoot tons of enemy soldiers in their faces. The campaign gameplay is functional, if a bit clunky, and it has many of the features you'd expect a shooter of this type to have. It's a bit dull to play, with most of its differences coming as a result of enemies (and players) not taking too many hits to drop. But that's probably not why you should care about The Line. Because behind its generic look and feel is a storyline that puts you into some really interesting situations that put the simple act of trudging across the desert and gunning down anyone who gets in your way into a very different context than the average shooter. Add to that some interesting moral decisions and multiple endings and you've got... well, you've got a collection of really cool things that would be a lot easier to recommend if the game surrounding those things wasn't so drab.

The setup is that you're a Delta Force operator named Walker, and you, along with two squadmates, have been dropped into Dubai. Dubai has been cut off for six months due to extreme sandstorms, and a US battalion that went in to gather up and extract survivors has seemingly been swallowed up by the sand. When you head to find out what happened, you discover that a conflict between the seemingly rogue battalion and the locals has erupted. Has the 33rd battalion and its commander, John Konrad, gone crazy? Who's inciting the locals to rise up and fight? As your rescue mission quickly falls apart, you'll find the answers to these questions and others. What's more, those answers are actually quite interesting, making the back third of the game--which is where most of the moral choices and important reveals lie--a collection of fascinating sequences that make the game's displays of abject brutality more meaningful than in something like, say, Homefront. The Line is more about showing you the horrible things that come about as a result of good-intentioned people going too far.

It's a seemingly minor thing, but the way the game handles player and squad dialogue creates one of those headslapping moments where you wonder why it's taken so long for someone to do this. As the story escalates, your soldiers get more harried and haggard, leading to shifts in their dialogue. At the outset, they sound like soldiers, calling out targets, kills, and reloads like you'd expect from a modern military game. At a specific point in the game, they switch, getting angrier. The squadmates get shorter with each other, and the jokes cracked at beginning of the game are replaced with curse-filled tirades as they question each others' actions. Reloading dialogue gets rougher. It happens again even later in the game, and by that point things have turned so bad that Walker is just swearing at his gun every time he needs to reload it. It isn't perfect by any means--the dialogue repeats itself too frequently and you'll occasionally hear one line of "professional soldier" dialogue immediately followed by "completely unraveled" dialogue, but make a note. You'll probably see games employ this style of adaptive recurring dialogue in more games in the future.

It's a shame that these tactics didn't find their way into a better game. Spec Ops: The Line is a stock third-person shooter with its share of turret sequences and cover-vaulting mechanics. You can deliver orders to your two allies, but this consists of little more than being able to say "shoot that guy first." There's no cooperative play in there, though that probably benefits the campaign a bit by letting it remove your squad to increase tension in a couple of spots. It's also not very long, though a few spots could have used an additional checkpoint or two, as it's easy to get careless during some of the longer battles and die, forcing you to replay a bit more than you'd like.

There's also a competitive multiplayer mode, complete with all of the loadout options and perks you'd expect. It gets a little shifty by offering slight differences between the two factions and each class offers different bonuses to nearby teammates, but beyond that it's the same sort of treadmill you've gotten on a million times before. Again, this is a case where that treadmill would be a lot more palatable if the action was more satisfying. Despite colorful names like "Chaos" and "Mutiny," most of the multiplayer modes are pretty standard. The first on-screen bullet points for those two modes are just "Deathmatch" and "Team Deathmatch," which makes you wonder why they bothered to name them something different in the first place. In addition to those combat modes, there are also a few objective-based types, but the action feels really off compared to other games of this type. It feels like the players skitter around a little too much, even when the network connections appear to be good. The other twist Spec Ops puts on things is that levels are occasionally hit with a sandstorm, taking out your radar and making visibility poor for a little bit. It doesn't really add much to the experience.

On top of all that, the multiplayer looks pretty terrible. The textures and objects in the maps look old, like they were originally designed for a different console and hastily pumped up to something more closely resembling today's standards. The multiplayer also shows off some of the worst Unreal Engine texture pop-in I've seen in a long, long time. The single-player looks a bit better than that and offers a bit of variety that actually manages to deliver a few well-put-together areas but the whole game is rife with jumpy animation and overall, Dubai never really feels like a place. It feels like a strung-together patch of levels of varying quality.

The story in Spec Ops: The Line isn't amazing, but the way that it's told really stands out and, in many ways, saves the entire project from being a complete waste of time. But that doesn't make it easy to recommend. It delivers some interesting ideas that approach the messed-up things that often happen in war-based video games in ways that actually make sense. It gives proper weight to the potential horrors of conflict instead of just throwing them in your face for mere shock value. If that interests you, The Line is worth seeing. 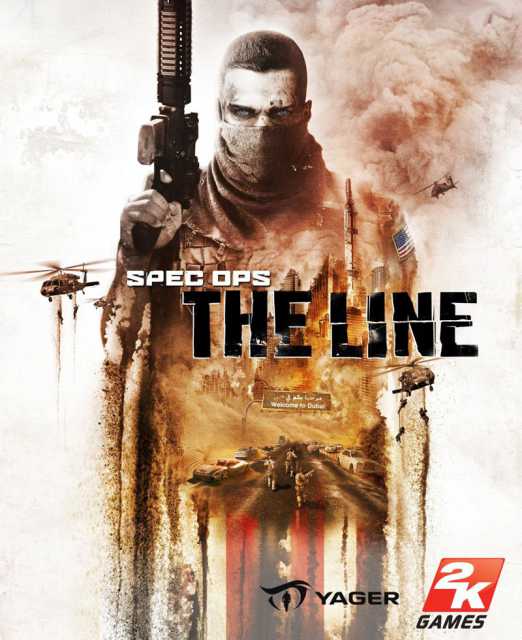