by Ryan Davis on October 13, 2011
Share:TwitterFacebookReddit

Save for some occasionally witty banter, this generally generic brawler is too concerned with the window-dressing of time-travel to capitalize on Spider-Man’s character, abilities, or mythology.

There have been plenty of highs and lows for Spider-Man video games over the past decade-plus that Activision has held the license. Typically, he’s at his best in the games that celebrate the webslinger’s high-flying, acrobatic abilities as well as his underdog wiseacre persona. In Spider-Man: Edge of Time, Spider-Man--playable in both his traditional Amazing and darker futuristic 2099 forms here--feels literally boxed in by the high-tech skyscraper that the entire game takes place in, as well as a story that spends more time fiddling with a superficial time-travel plot device than it does with the characters trapped in its machinations.

Even as a follow-up to last year’s Spider-Man: Shattered Dimensions, Edge of Time feels like a step backwards, reducing the number of unique Spider-Men you get to play as from four to two, completely eliminating the unique stealth stylings of Noir Spider-Man--arguably the most interesting aspect of Shattered Dimensions--in the process. It’s a Spider-Man team-up where Spider-Man is inessential to much of the experience, and it's not hard to imagine an alternate reality where Edge of Time doesn’t feature any Spider-Men.

It all starts when the clearly evil CEO of the clearly evil conglomerate Alchemex--voiced by a clearly phoning-it-in Val Kilmer--travels back from the year 2099 to the late 1970s to jump start the dastardly company's rise to power, affecting the realities of both present-day webslinger Peter Parker and his 2099 counterpart Miguel O'Hara in the process. Tapping into some ill-explained 2099 tech, O'Hara is able to communicate across time with the time-distorted Parker--now an Alchemex employee, though the rest of his reality as Spider-Man is inexplicably unchanged--and the two proceed to do what they can in their respective time frames to reverse the damage. Other than appearances by Eddie Brock as Anti-Venom and a relatively benign Dr. Otto Octavius, Edge of Time is largely free of Spider-Man’s supporting cast or his colorful rogue’s gallery. Even those that do appear are barely recognizable for most of the game, and are secondary threats at best.

Time-travel as a plot device can be a tricky thing. It's just as easy to introduce overly complicated logic as it is to whitewash any paradoxical dead-ends you might find yourself in, and Edge of Time manages to fall victim to both pitfalls. The idea of a character’s actions in one timeframe having an instant impact on the reality of another is promising, particularly from a gameplay perspective, but all of those turns in the story here are completely pre-scripted, eliminating any sense of player agency in how things unfold. Even Spider-Man himself vocalizes his concerns about the dubious “quantum causality” effect that Edge of Time uses as a lazy catch-all whenever it needs a new obstacle for its heroes.

In the game’s earliest example, Spider-Man 2099 is faced with a giant robot he has no hope of defeating, so Amazing Spider-Man dismantles the giant robot before it can even be finished. Everyone involved, including both Spider-Men, assume this will erase the robot from existence, but instead, it’s replaced with a similarly marauding gang of smaller robots. It’s the first sign of many that “quantum causality” is just a paper-thin way of saying “random things happen because the writer wanted them to.” The timeline might not be linear, but your path through the game most certainly is.

Narrative clarity isn’t helped by the fact that both characters are traipsing around the same drab building for the whole damn game. Even if the game didn’t deliberately revisit certain interiors, which it does frequently, there’s never a terrific sense of place in Edge of Time, just one dark, vaguely high-tech room after another. Other than a single, relatively open-air greenhouse environment, this game takes place mostly within narrow corridors, which, in addition to adding to the monotony, really marginalizes Spider-Man’s web-swinging ability. Flinging Spider-Man through wide-open spaces has been one of the greatest pleasures of past Spider-Man games for me, and the risky, improvisational feel of his particular style of traversal can represent a great shorthand for the character’s persona. Here, the traversal feels clumsy and cramped, and the game ultimately leans on its beat-’em-up combat for its five-or-so hours more than anything else.

So, you go back and forth between playing as Parker and O’Hara as the story sees fit, bashing squads of jackboot thugs or faceless robots, respectively. Both Spider-Men share a number of fundamental abilities, and even though the game tries to differentiate them with unique skill trees, the practical differences in combat feel pretty negligible. The key exceptions are the free-fall sections that are played exclusively with Spider-Man 2099, which themselves rely on too much trial-and-error to provide particularly satisfying respite from the repetitive and mashy combat. In a better game, Edge of Time’s in-line combat and the traversal challenges that pop up during the game (and which are easily revisited after the fact) could be a compelling reason to come back for more, but this game already overstays its welcome as it is.

I suppose some slack should be given to developer Beenox, which had roughly a year to turn around from its last Spider-Man game. But that’s not really material to the player, who is expecting, if not a great game, at least a great Spider-Man experience. Spider-Man: Edge of Time makes good on neither. 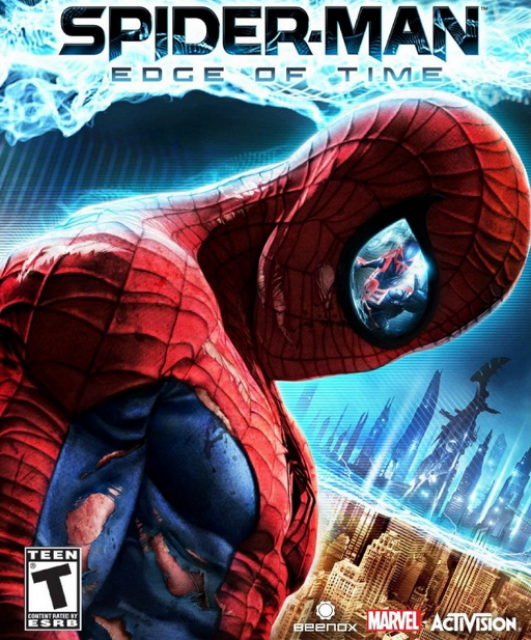