by Alex Navarro on February 28, 2012
Share:TwitterFacebookReddit

SSX is an intriguing mix of old and new that doesn't always pan out, but the absurdist snowboarding gameplay remains as thrilling as ever.

EA's latest SSX game is, at once, a nostalgia piece aimed at recapturing the attention of old franchise fans that have wandered astray, and something of a series reboot, mixing in a host of new bells and whistles and heavy drops aimed at capturing the attention of those who maybe never got into SSX back in the day, but these days are big fans of things like persistent online communities and also dubstep. It's a strange mixture of vibes that, at times, seem at odds with one another. It's as though the team behind SSX were never quite sure how far toward realistic danger nor straight-up arcade ludicrousness it ought to veer toward, relying on the old school silliness of SSX's snowboarding gameplay to carry the load as the team built a gaggle of new mechanics and concepts around it--some of which don't really gel with that classic SSX flavor. The end result is an experience that can often be tremendous fun, though sometimes almost feels accidentally so.

First and foremost, the thing to understand about this SSX is that it controls correctly. The game presents you with a couple of different control options, including a classic style that maps the various tricks you can pull off to the face buttons of the controller, or, in a move that speaks to the great "analog sticking of everything" that video games have been all but obsessed with over the last several years, you can instead opt to swipe the right analog stick in various directions, should that suit your fancy. For my part, I stuck to the buttons, as I felt the timing and responsiveness of the rider on screen better suited my play style that way. The right stick always felt a bit too willy-nilly for my tastes, though perhaps others may see it differently.

Regardless of which style works for you, the greater point is that on the slopes, the action feels fantastic. SSX has always been about speed and the outright obliteration of the laws of physics, and this SSX takes that mantra to absurd new heights. I feel I am in no way speaking out of turn when I say that this SSX is light years faster and more intense than any of the games of yore. Go ahead, pop that copy of SSX 3 back into your PlayStation 2, and then give this one a spin. Chances are, the old game will make you feel like you just graduated from an Edsel to a Trans Am.

The bonus is that it does this while maintaining a sharp visual style and an even sharper frame rate. The game simply doesn't slow down on either the Xbox 360 nor the PlayStation 3, save for very, very minor bouts during some of the hairier races. It's nothing that's going to affect your play, however, though at times, you might actually pray for a bit of slowdown, just so you can regain your bearings.

You see, the one quirk with all that speed is that it can often lead to absolute chaos on the slopes. Of course that chaos comes part and parcel with being something called SSX, but in this version it's almost incomprehensible at times. Smart players will learn quickly that the speed boost is something to be used sparingly in key situations, and not something to be spammed constantly. That might seem at odds with the notion of winning, but it's not at odds with the idea of you surviving.

SSX is no longer just about getting through the courses in the fastest time or with the highest trick score--it's about making it out with your spine still intact. Large precipices and huge, jutting rock formations litter many of the courses, meaning you may very well kill yourself at some point during a race. And by may, I mean you will.

SSX certainly has its moments of frustration. There are certain courses that seem to have been designed with the maximum potential for controller-throwing rage in mind. This becomes especially true during the game's "deadly descents," courses that are purely about survival above all else. These courses are, of course, extremely tricky, and often involve quite a bit of accidental death. You'll have a bit of that on the less-deadly descents too, but the ones stamped as deadly practically require rote memorization of the course to survive, especially in the later stages of the game.

In order to try and keep you alive, EA added a number of equipment types for players to strap on before some of the tougher scenarios. Courses with huge gaps between boardable sections require wingsuits that can be deployed by a tap of the right bumper/R1 button. Icy courses demand ice picks that can be used to help you make sharp turns. Blizzard condition courses give you a pulse lamp that helps identify the terrain during a whiteout, and so on and so forth.

They're interesting ideas that sometimes feel like stopgap solutions instead of full-fledged mechanics. For instance, the control inherent to the wingsuit gives one the impression that no one spent much time actually using the thing during QA. It sometimes seemed to just undeploy itself at random, and sometimes just wouldn't travel in the direction I was steering my character toward. The headlamp mechanic is borderline useless, since your field of vision is entirely dependent on the position of your head, and doing tricks often leads to disorienting situations where you have no sense of where you're actually supposed to be.

And then there is the rewind mechanic, that great bastion of all things racing in video games of the last several years, the thing that makes it so that no matter how bad you suck, you can just wipe away all your failure at the press of a button. Except that isn't really the case here. In SSX, rewinding is less of a catch-all failure eraser, and more of a stiff punishment for sucking that begrudgingly allows you to carry on. When you rewind, you're fined a stiff points penalty for every millisecond of time you go backward. And to add insult to your time-reversed injury, other players on the course don't experience the same rewind. So while you're flying backward out of a ravine and back onto semi-solid ground, everyone else is just on about their business. It's an interesting idea that, in certain scenarios, renders rewinding all but useless. On the deadly descents, where point totals and times come second banana to just surviving the damn thing (primarily during the World Tour mode), they're a godsend. In any situation where you're racing other players, you might as well just hit the restart button instead.

The aforementioned issues only stand out so much because they're the bulk of what makes this experience new. It's as if at some point, an EA executive sat down the team, who had been making a perfectly good SSX sequel in the vein of its predecessors, and said something to the effect of, "Look, guys, it's great that you've captured what people loved about the old games. But we really need something new, something hip, something fresh to sell this to a modern audience." Hence, all the rewinding and upgradeable equipment and dubstep.

While those changes never feel organically blended into the framework of what we've come to know SSX as, they can be reasoned with. There's a learning curve, certainly, but there is a time when you will at the very least learn to grudgingly accept them, and manage to work with them. And honestly, I don't want to belabor these points too heavily, because in the end, they're the minority of SSX's overall experience. By and large, the majority of SSX's courses are great. They're fast, fun, full of crazy grindable/jumpable scenery, and for all intents and purposes, feel exactly how you would like SSX courses in 2012 to feel. There are lots of them too, spread across many exotic locales like Antarctica, the Himalayas, and Siberia. It's worth noting that PlayStation 3 players also get access to a bonus mountain in Japan's Mount Fuji. It's a good level with some nifty scenery, but it's not necessarily so great that it demands purchase of the PS3 version. If anything, you should make sure you get the version that coincides with the console featuring the larger friend list.

That's because SSX's true primary draw is in its multiplayer. To be clear, that's multiplayer largely in the asynchronous sense. SSX takes most of its multiplayer cues from Need for Speed: Hot Pursuit's Autolog, the all-encompassing rivalry system that constantly updates you on how your friends are performing on various courses, all while goading you into trying to beat them. And want to beat them you will.

You'll do most of this competing in both the Explore and Global Events sections, as the World Tour mode is little more than a barren and frustrating single player mode that's more tutorial than campaign. Explore features 150 different variations on the different mountain courses (many of which do overlap), while Global Events focus on specialized events that the entire player base of SSX can simultaneously compete in. Those who perform well on the Global Events will earn a proportionate amount of credits (which you use to buy equipment, outfits, and the like) to the quality of the performance. You can also create your own Global Events and make them decidedly less global, if you just want to play with your friends.

It's these ideas that give SSX its legs, and makes it worth trudging through the initial awkwardness of its other various experiments in how to make SSX appealing to kids these days. It's the "everything to everyone" approach that sometimes threatens to derail this new SSX, but it's the solidity of the core design—the same design that's propelled this series for the better part of the last decade—that makes it absolutely worthwhile. 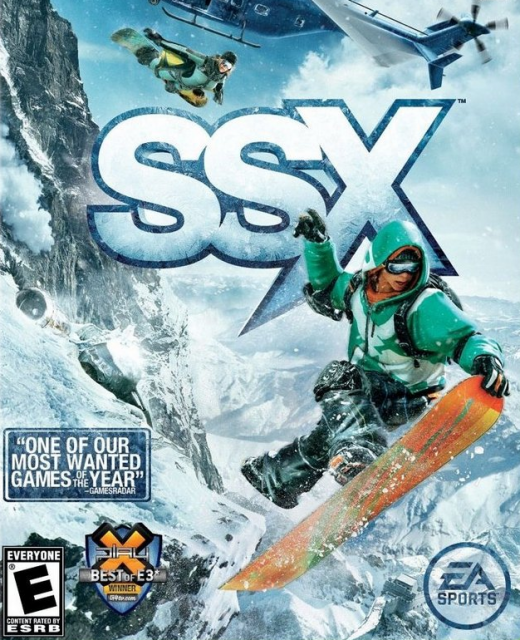