by Matt Kessler on September 16, 2011
Share:TwitterFacebookReddit

Star Fox 64 3D is too short and feature-deprived at $40 to satisfy newcomers while missing some of the nostalgic hooks that made its predecessor beloved.

How much money would you be willing to pay to hear Peppy say, "Do a Barrel Roll!"?

The answer to that question will be your main signifier as to whether you should seek out Q-Games' remake of a well-regarded N64 rail shooter. Star Fox 64 3D brings a gorgeous visual shine to the game as well as some expanded multiplayer features, while keeping the game’s memorable single-player intact. But that single-player is pretty short and designed to be replayed endlessly--something that made a lot of sense back on the N64. But shifting standards give it all a very different feel today. As a result, Star Fox 64 3D comes across like a video game stuck in the past, an aging release that, for all of its lavish visual upgrades, feels archaic. Even if you're willing to pay a premium to see Star Fox 64 again, you may not get what you expect, as the port contains enough small but meaningful alterations from the original release that it loses some of its nostalgic power.

It’s too bad, because Star Fox 64 3D does faithfully recreate the original game’s single-player campaign. You won’t find any new planets to visit, new warps or power-ups. This is a pretty straight port with a few extraneous additional features and no real surprises. Enemy locations, item placement and boss battles are identical to their locations and strategies from 14 years ago. You’ll still charge your laser to destroy enemies, launch bombs to clear the screen, disarm different bombs, fight Star Wolf and, yes, even do a barrel roll or two. And that campaign is still pretty fun, constantly shifting your objectives from level to level to keep each mission fresh. You’ll traverse asteroid fields, blow up motherships, defend your mobile starbase Great Fox from missles, cut off a supply line by crashing the transport train into an enemy base, destroy a planet’s satellite defense platform, and even fight a giant brain. It was, and still is, a well-paced shooter with great variety and a silly tone that keeps the whole game feeling breezy.

The graphical overhaul in Star Fox 64 3D is probably even more dramatic than the recently updated port of Ocarina of Time. Crisp ground textures below your ship have craggy, uneven, rocky surfaces instead of a single color painted across the map. Water and lava churn and splash with a ferocity you’d never dream of seeing on the N64. The new skyboxes are far richer and more animated than you remember. It’s a great look that does inject some new life into this fondly remembered game.

Star Fox 64 also does extremely well in 3D, which works without a hitch and enhances the game without becoming distracting. Enemies and environmental objects alike tumble through space, out of the screen and into your line of sight (and occasionally, your ship). It’s a great-looking effect that works nicely even on the highest 3D settings.

With such a cool visual makeover on top of an already memorable and fun campaign, Star Fox 64 3D seems like it does everything right to appeal to its nostalgic fan base and bring in new fans at the same time. But the high levels of reverence for the original game end there, as Star Fox 64 3D makes too many decisions that detract from its nostalgic appeal. Chief amongst those offenses--especially for fans of the original game-- is the rerecording of the game’s famous voice acting. For whatever reason, Nintendo and Q-Games opted to bring the original voice actors back into the studio to once again capture that specific mixture of silly cliches, bizarre inflections and G-rated thrills that made the original characters memorable. But apparently that magic is gone forever, because the cast just can’t hit those notes you and I remember. Inflections are wrong, lines have been changed, Falco sounds way too much like a jerk, Fox comes across like a whiner, and Andross’ crazy hyena laugh has completely vanished. Nintendo has clearly gone through a lot of work to recreate that lost voice acting with high-quality audio. But with no option to play those classic voice tracks, Star Fox 64 3D is left with a facsimile that doesn’t deliver the same thrills.

Similarly, Star Fox 64 3D’s music tracks have similarly been rerecorded and also replaced with far less memorable instrumentation that tries and fails to recreate the original N64 songs. Star Fox 64 3D could have handled either a direct emulation of those original tunes or a proper orchestral arrangement, but instead opts to emulate the sound of the N64 chip, which was in turn trying to emulate proper orchestrations. As a result, some of the game’s tracks sound like they’re coming out of a cheap keyboard, robbing them of their energy and scope.

Still, the changes to the music and voice acting are really only going to rub you wrong if you're a Star Fox purist, but that’s the group of players most likely to enjoy this premium remake. If you’re a new player curious why many have fussed about this game for so long, you’re going to wonder why this short, simple, and easy rail shooter costs $40 while other games in the genre offer more features (including online hooks) for a quarter of the price. For as much work as has gone into this re-release, the core of Star Fox 64 3D is untouched and, as such, feels shallow and lacking in content compared to similarly priced games today.

And while there are a few 3DS-specifc features in this port, none of them are substantial enough or fleshed out enough to merit the full-price investment. In true Nintendo form, Star Fox 64 3D has optional motion-based controls, allowing you to steer your jets and tanks using the handheld’s gyroscope. But the motion controls sacrifice some of the required precision needed, even on the easier difficulty, to clear each stage, along with making it impossible to use the game’s legitimately great 3D effects. The controls work, but they’re not fun to use, especially since the handheld circle pad works just fine for playing Star Fox on all the difficulty settings.

Along with the new motion controls, Star Fox 64 3D also makes substantial upgrades to the original game’s multiplayer Battle Mode. Thankfully, the 3DS battle mode has lost the dense fog that plagued the original game’s multiplayer and enhanced the various game options. The brand new battle mode features expansive maps with some new geometry, as well as a Mario Kart-inspired powerup system that adds a few additional pickups, such as cloaking, to the expected arsenal. And, in a neat touch, the game’s multiplayer supports download play, which means all you need to get the full multiplayer options and settings across multiple players is a single cart. In a goofier, less meaningful addition, the 3DS’ front-facing camera will capture your face during your match and display it over the pilot’s aircraft as well as after a kill. It’s ridiculous in the same way that feature was in Burnout Paradise, but given the 30-foot maximum range for the wireless local multiplayer, it’s a feature that essentially duplicates the act of looking at a person’s face. It’s a silly diversion but it’s not the best reason to come to this port.

But those are the kinds of features that get added to games when the developers are stuck making a straight remake instead of adding the meaningful, substantial additions and upgrades that could have made Star Fox 64 3D a more robust package. The desire for a straight nostalgic recreation of the original game forbids the addition of the very features that would have made the game truly modern. As a result, we’re left with this rail shooter without online multiplayer, online leaderboards for single-player, new levels, new boss fights, or even a real orchestral score. Those are the kinds of features game players demand from games that cost half of what Star Fox 64 3D retails for. The game at its center may still be fun, but it’s not fun for long enough to overlook the game’s simplicity, its short length, and its lack of modern gameplay features. If you’re looking for the history lesson, you’re better off grabbing it for $10 on the Virtual Console. 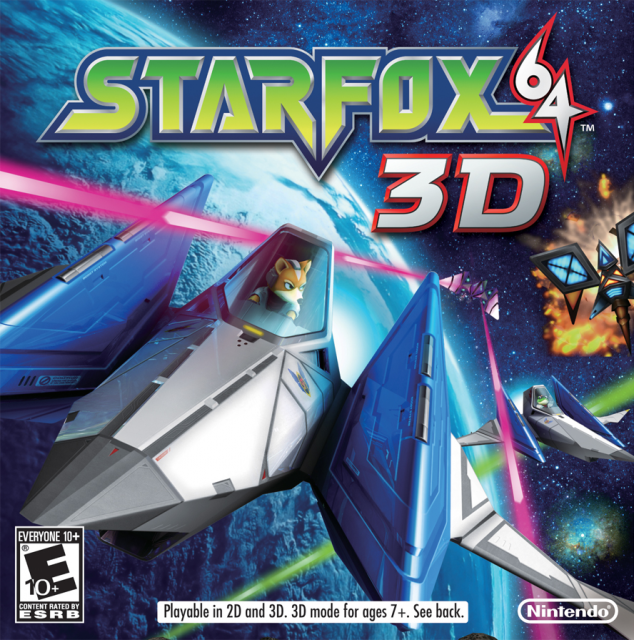