Kirk may be all smiles, but I fear that beneath the charm lies a sad, beaten, red shirt.

by Alex Navarro on April 26, 2013
Share:TwitterFacebookReddit

J.J. Abrams' reboot of the Star Trek universe has certainly made the franchise into a more outwardly adventurous and thrilling one. I loved old Star Trek for its more thoughtfully measured sci-fi storytelling, but Abrams' first movie (and by early accounts, the forthcoming second film was well) breathed new life into the franchise in a way that the last couple of movies and TV series clearly couldn't. By bringing the action and the adventure to the forefront, Star Trek was suddenly thrilling for the first time in many, many years.

Unfortunately, that shift toward action and adventure has its drawbacks. Namely, it gave Digital Extremes the excuse to turn Star Trek: The Video Game into the most rote, drably unimaginative third-person shooter you could think of. Because when you think of Star Trek and video games, you immediately think of Kirk and Spock starring in their own cheap knockoff of Gears of War, right? Right...?!?

Which isn't to say that a third-person shooter featuring cooperative Kirk and Spock gameplay couldn't be done well, but Digital Extremes failed to realize such a concept with any measure of quality. Built as a sort of in-between story to the two Abrams films, Star Trek features Kirk and Spock trapped in a mess featuring angry alien interlopers, shadowy Starfleet politics, and a giant MacGuffin of a device that tears holes in the universe, powers entire planetary colonies, and probably does some other stuff the writers forgot to bother explaining.

This is not a well-told story, mind you. It starts out promisingly enough, immediately acknowledging the last dangling problem left hanging at the end of the 2009 film, namely that of how to resettle the now nearly extinct Vulcan race. The device in question was purportedly built to help set up the Vulcans on a new planet, but the vile, reptilian Gorn have arrived and simultaneously stolen the device, while infecting various human and Vulcan innocents with some kind of zombie disease. Thus, it is up to Kirk and Spock (with occasional help from the rest of the Enterprise crew) to dispatch the Gorn, get the device back, and save the day.

Fine, except for the part where nearly everything you do in Star Trek is a terrible bore. As a third-person shooter, Star Trek is at its most effective when all you're doing is shooting. The weaponry and mechanics of combat are mostly fine, in that you can effectively use cover, aiming works as it should, and there's a decent variety of secondary weapon options to play around with. Granted, even the combat isn't devoid of problems. Enemy AI is horrendously bad, often finding itself hung up on pieces of the environment, or otherwise just standing around looking in the opposite direction while you walk right up on them and start pumping phaser blasts into their idiotic backsides.

Worse, however, is your accompanying AI. You can have a friend (either online or off) pick up the role of whichever character you don't choose to play as, and that's recommended, because having the computer pick up the slack often results in hilarious misadventures. Watch as your AI companion runs straight into a wall and refuses to stop running, no matter how many times you command him to do otherwise, or gawk as he actively ignores your desperately injured body, doing absolutely nothing while you bleed to death ten feet away.

Fortunately, outside of the occasional ceiling opening that you'll have to help your partner boost up to, or the few doors that require both of you to mash buttons to pry them open (ugh), there's not really much cooperation required. The only time the game does anything remotely interesting with the co-op mechanics is when you're handed a transporter gun that lets you beam your partner to specific transporter pads in a zero-g environment. These transporter puzzles aren't more than a minor brain-teaser in an otherwise straightforward shooter, but any moment that actually requires minimal critical thinking is a welcome distraction in this dullard of a game. Unfortunately, that bit is tragically fleeting, and within minutes of going through that section, you're right back to lazily shooting evil lizard men.

This lackluster adventure drags on for at least a few hours too many, mostly due to the lame number of "go find the missing power cell" or "go hit the many, absurdly spread out switches to continue" missions the game pads itself out with. It's dreadfully boring stuff, made even more dreadful by the tragic lack of enthusiasm from those forced to explain to the players just what the hell is going on. All of the major actors from the film's cast are on-hand to voice their characters, at least. Chris Pine and Zachary Quinto do the lion's share of the talking, and most of their dialogue boils down to them pointing out to each other (but more accurately, the player) literally whatever is going on right in front of them. Do you need to hit a switch somewhere? Then at some point, both Spock and Kirk will say aloud that one of them needs to go hit a switch somewhere, over and over, until you hit that damnable switch. The story-based dialogue is obviously a bit better, but none of the actors seem particularly enthusiastic about the lines they've been handed. Quinto sounds stiff (even for a Vulcan), and Pine's boyish charms are mostly lost amid the many weak one-liners he's been handed.

It's not even a particularly good looking game, which is criminal when you consider that it has one of the most exciting visual designs of any current film franchise to work off of. Hell, half of what made Star Trek so great was the sheer scope and variety of the movie's visual palette. Joke about light bloom all you want, but the movie looked incredible. This game looks anything but, with atrocious animations, lip-syncing that hardly ever syncs, and crummy environments that look straight out of this console generation's earliest years.

There are glitches and other unfortunate quirks to talk about, but those problems barely register over the din of utter mediocrity that pervades so much of Star Trek: The Video Game's campaign. Outside of a horrid, poorly-explained turret sequence in which you (barely) pilot the Enterprise in battle, there is scarcely an acknowledgment anywhere in this game that Star Trek fans might want to do something other than just run around and shoot aliens. Such a concept ultimately belies the very point of Star Trek in practically all of its many incarnations. But even if you can get past this strange misunderstanding of what makes Star Trek tick, you won't be able to get past the desperate lack of imagination and hamstrung functionality of Star Trek: The Video Game. 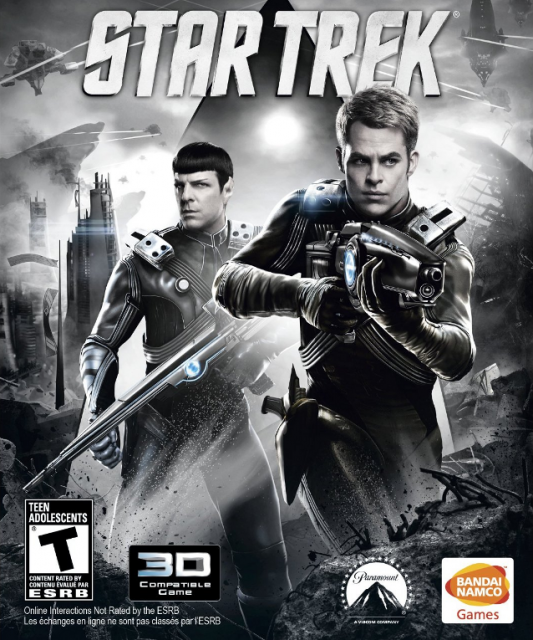