by Brad Shoemaker on June 19, 2012
Share:TwitterFacebookReddit

If this is the best Kinect can do with a "hardcore" game, you should just pack it up and wait for the next Xbox.

Steel Battalion: Heavy Armor is thick with irony. It comes from a franchise that once hinged on dozens of buttons, yet this game offers almost no buttons at all. It's designed in such a way that only pixel-perfect aiming and split-second responsiveness will get you through its missions unscathed, but your ability to react quickly and take in your surroundings is so severely compromised that you'll die, repeatedly, in each attempt. It purports to put you right in the middle of piloting a lumbering, tank-like robot, while in reality it frequently destroys the tactile connection between player and game. Put as simply as possible, I don't think you should play Steel Battalion: Heavy Armor.

The problem here is two-fold, split right down the middle between Kinect functionality that barely functions, and game design that's equal parts boring and frustrating as all hell. The idea of placing you in the cockpit of a realistic battle machine has been done effectively for years on the PC, recreating everything from submarines to tanks to TIE Fighters and believably putting you in charge of those vehicles' complex arrays of instrumentation. So the very basic, simulation-style premise of Heavy Armor is a sound one. It was the point during development that someone decided nearly all of your walking tank's vital functions--from changing ammunition to viewing a map to pulling down a periscope or closing a front shield vital to protecting your pilot--should be mapped to the imprecise, unreliable Kinect controls that this game went horribly off the rails. I won't go on ad nauseam about all the specific ways the Kinect can misinterpret your inputs and confuse one intended action for another, but it makes this game look utterly ridiculous to anyone watching you from the sidelines, as you flail in vain to do one thing and watch something completely different happen instead.

It's frustrating enough to play a game that flat-out refuses to behave properly, but in Steel Battalion's life-or-death situations, it's absolutely unforgivable that you can't always do exactly what you want to do when you want to do it. This is the sort of game where you peer through a tiny viewport that shows you only a small portion of the battlefield directly in front of you, but you can and do take fire from all sides almost constantly. It's the sort of game where moving your mech (called here a "vertical tank," or VT) even a few steps will cause your reticle to bob up and down wildly, making it a delicate balancing act of deciding when to move and when to shoot. You can take critical damage from an enemy VT too far away to see, or a lone foot soldier with an RPG who fires before you can even swivel your turret around and pick him out from the background, and the game is merciless about disabling aspects of your VT like the viewport or, you know, the legs, rendering you blind or inert until you finish the mission or die. (You always die.) I've rarely felt so powerless to tackle a game's challenges as I have while playing this one, and that's not fun, at all.

It would be easy to blame the failure of this game entirely on the unreliability of Kinect, but Steel Battalion wouldn't even be a good game of this style even if it worked properly. All of the difficulty comes from how slowly you move around the environment and how limited your ability is to identify the threats around you and defend yourself from them. Enemy AI is virtually nonexistent in this game; the infantry stands there motionless and takes pot shots at you even when you're right up in their faces, ready to step on them, and enemy VTs act pretty much the same way aside from mindlessly sidling back and forth occasionally. If anything about your own VT were faster or more precise, you would steamroll over every bit of opposition in this game. The mission design is bland as hell, usually tasking you with merely killing everything in an area, killing as much as you can until the time runs out, or getting to a specific point on the map. Many of the levels are bafflingly short, often involving only a few seconds of meaningful combat in between the embarrassingly stereotypical characters jabbering in your ear. It's also laughable how often your success in a mission hinges on performing some character action with motion control. The first time you fail to fight off an enemy assailant or grab an important object because the Kinect can't read your frantically outstretched arm, and consequently fail a mission because of it, is likely the last time you'll ever want to play this game.

Because I haven't quite let go of the compulsion to run down all of a game's major features in a review, I'll mention that a few of the missions are playable with up to three other people, if you're one who believes misery loves company. If you get a high enough rank on these missions, you can unlock some minor upgrades (a night-vision periscope and a better map, for example) to equip on your VT. It's fitting that when you play these missions solo, there are AI players in there who can actually earn negative points when they perform badly (which they always seem to do), which drags down your overall score and makes it a lot harder to earn any new gear.

To be clear, I take no pleasure in delivering this sort of bad news. Prior to the game's release, it was fun to see how earnestly Heavy Armor embraced what is honestly a pretty silly concept, but one that would be easy to get excited about if it worked right. Moreover, this is a great-looking game in pure aesthetic terms, with some really nice-looking battlefields and environment effects. I love the emphasis on a style of down-and-dirty, purely mechanical warfare clearly inspired by World War II, back before the fly-by-wire computerization of vehicle control largely automated the process of driving these sorts of war machines. In the game's world, this future reliance on gears and grease follows a catastrophic event called "Datacide," which seems to have destroyed all the advanced micro-electronics in the world and also coincidentally turned China into an imperialist superpower bent on subjugating the rest of the world under the banner of a new United Nations. The game doesn't even do anything interesting with that setup, though, failing to establish memorable characters or create any intrigue between missions. The best you get are some vague allusions to a VT superweapon, but I was often eager to skip the cutscenes and get to the next mission, which, now that I think about it, really says something about the story.

Maybe the latter half of Steel Battalion rivals the work of Shakespeare. I wouldn't know; I only made it to about the midpoint of Heavy Armor's campaign before I threw up my hands in disgust, but I had lost any desire to keep playing it hours before that. You can decide for yourself whether you want to view this game as a blanket indictment of the Kinect as a device for playing "real" games, or merely an isolated case of this one game's execution falling far, far short of its ambitious premise. If you're trying to decide whether you should play this game, though, let me save you some trouble: don't. 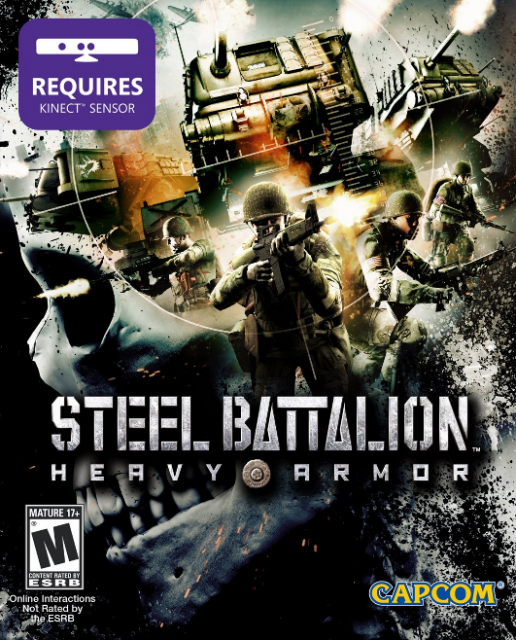