by Jeff Gerstmann on July 7, 2009
Share:TwitterFacebookReddit

Street Fighter IV combines old and new in powerful ways, resulting in a game familiar enough to bring retired fans back into the fold while being different enough to appeal to the players who have stuck with the genre since day one.


Street Fighter IV is one of those games that makes me glad I'm not a game developer. Dealing with franchises that are beloved by the world, making dramatic changes to classic formulas, attempting to thread the needle between a wide, mainstream audience and an insatiable collection of die-hards... it's probably not too easy. And that's what makes Street Fighter IV that much more impressive. Smart choices were made at almost every turn, and the final result is an absolute masterpiece that will appeal to longtime fans as well as the people who haven't thrown a fireball since 1993.

Street Fighter IV gets back to basics in a lot of ways. If you played Street Fighter II Turbo: Hyper Fighting to death and then sort of drifted away from the genre, you'll probably be able to jump right back in after a little refresher course. The original 12 characters from Street Fighter II are present, and there are 25 characters in all. The rest of the roster pulls in a pair from Super Street Fighter II, a few from the Alpha games, and a collection of new fighters. From a gameplay perspective, the new characters fit in just fine. From a look-and-feel angle, though, guys like El Fuerte, the lucha libre chef, feel a little out of place. Likewise with the big, bobbling belly with appendages that is Rufus. But while they may look and act like comedy characters, they aren't total jokes when you're at the controls. Also not a joke? Gouken, a fighter who has appeared in the Street Fighter storyline before, but makes his first appearance as a playable fighter here. As Akuma's brother, he's the good guy to Akuma's raging demon badness. While you probably won't enjoy controlling every last fighter in the lineup (I've never been much for Dhalsim and I don't much care for Gen, either), there are enough different characters here to ensure that you've got a main selection and a couple of backups.

The core fighting of Street Fighter IV is largely based on Super Street Fighter II Turbo, but that doesn't mean that this is just a 3D version of an old 2D game. Sure, the old standbys still work. If you want to pop from a low forward into a fireball, you still can. But there's some new stuff in IV that really changes the game once you start getting into it. The biggest difference is the addition of the focus attack. This chargeable move will absorb an incoming attack and can also be charged to deliver an unblockable attack that stuns your opponent, ideally setting you up for some free hits. You can also cancel into a focus attack out of a special (at the expense of some of your super meter) and cancel out of the focus attack with a dash. There are two meters that charge over the course of a fight. The super meter charges as you do moves and lets you do pumped-up EX versions of your specials or a reasonably devastating super combo. There's also a revenge meter that fills as you take damage. When it reaches a certain point, you can perform an ultra combo, which is usually a hyped-up, more damaging version of a character's super. Each option has its place, obviously, and it's up to you to figure out when to employ them.

So what do you do if you can't quite figure out when and where to employ those techniques? Or, to be more direct, what do you do when everything I said in the previous paragraph sounds like meaningless jibber-jabber? Ideally, that's what the game's trial mode would teach you, as its main focus is to help people get better at the game. But it doesn't teach you anything about theory, the hows and whys of the way the game functions, or even basic stuff about when you can safely jump in on someone and when you shouldn't. Instead, the trial mode gives you a list of moves to perform, starting with the absolute basics, moving on to simple cancels, and eventually getting into some lengthy, difficult combos. If you already understand the basics, this mode will let you pick up some deadly combos. But it doesn't even meet you halfway and let you view the moves being performed before you attempt them, leaving things like working out the timing of the combo to you. If you already know how to play the game, it won't be an issue. But if you already know how to play the game, all you'll take away from it are a bunch of new combos that, depending on your skill level, you may or may not be able to actually complete. It's sort of frustrating, because if this mode were more fleshed out, it might help complete neophytes understand the core concepts behind canceling from one move into another.

The rest of the game's features are fairly standard, with the sorts of versus, survival, time trial, and training-against-dummies modes you'd expect from a fighting game. They're done up a bit differently here, though, with survival and time trial offering different levels of play with different goals to attain. You'll have to play a lot of arcade mode, as there are quite a few characters to unlock. In arcade mode, you'll get to see some short anime clips that bookend each character's trek through the mode and give the game more of a story than Street Fighter has presented in-game in the past. These range from serious, main-plotline clips about the nature of the game's final boss, Seth, to fairly whimsical stuff from characters that don't tie in as deeply, like Honda and Zangief. If you're just bent on unlocking characters, you may want to set the difficulty all the way down and play one-round fights to get it done quickly. It's also worth noting that the easiest difficulty setting is practically like playing against an empty controller. If you've had trouble with fighting game AI in the past, you still shouldn't have any serious trouble getting through the game. Of course, it can play pretty rough, as well, if you want to turn the difficulty up a few notches.

While fighting the game's AI can make for a fine time, the very nature of fighting games all but requires you to play against a human opponent. While you can certainly do that locally, the real draw of Street Fighter IV is its online play. As with anything played over a network, there are a lot of different factors that can hamper the game's ability to play smoothly, but other than a couple of typical, minor hitches, the online seems to work fantastically. For the most part, it's the typical ranked/unranked setup, but there's also a way to configure your arcade mode games to allow players to butt in with fight requests, which is a cool function that sort of replicates the arcade experience. A championship mode patch added a sort of ladder-like tournament setup to the online mode in the console releases, and this mode shipped by default in the PC version of the game. It's interesting because it doesn't require you to assemble a full tournament bracket before starting to fight. It just sort of assembles the brackets on the fly as you partake in tournament matches.

Online, you can present yourself via a title and an icon. You unlock additional titles and icons by performing certain tasks. So, for completing a trial stage with Sagat, you might earn the "Password is 'Tiger'" title. There are 16 pages of different titles to get, and once you start playing online, you seem to just start racking them up. Same goes for icons, which range from little leaves that denote some basic level of experience to a baby chick, to a picture of a joystick, and so on. The game doesn't really specify how these items are unlocked, so people on the hunt for all of them will have a lot of work ahead of them.

Probably the most impressive part of Street Fighter IV's visual style is its facial animation. Unlike a lot of other polygonal dudes out there in video game land, the characters in Street Fighter IV have a lively look to their faces that makes them stand out. It's especially noticeable during the startup of an ultra combo. The player on the receiving end of the ultra usually freaks out, with bulging eyes and a dropped jaw as if they can't believe what's about to head their way. Taking people out with an ultra also usually looks great, from the facial expressions to the huge sunburst effect that fills the screen. Moreover, the game seems to match its arcade counterpart in every way that matters. The PC version of the game also offers three addiitonal graphical filters that let you play around with the way the fighters look. They're fairly subtle, with one adding a bit of an ink effect that hovers around the edges of the fighters, another giving the characters a watercolor-like palette, and posterize effect that flattens the look of the characters out a little bit. Watercolor is probably the most striking, but I prefer the default look of the fighters.

The audio portion of Street Fighter IV might be a bit off-putting for some players at first, but you're given enough options to straighten things out to your liking. The game's main menu and intro is set to music that sounds like some kind of boy band nightmare. The worst part is that "Indestructible" is incredibly catchy, and it's been sort of half-stuck in my head for around 10 days or so. It's also worth mentioning that the character voices have all been recorded in English as well as Japanese. Now that doesn't mean that you're going to hear Ryu shouting "dragon punch" instead of "shoryuken," but the between-fight banter is spoken in English by default. Also, all of the fight voices have been recorded twice, so Ryu will say "shoryuken" differently depending on which voice actor is on the mic. After completing the game once, you can set any of the fighters to Japanese on an individual basis, so if you think it's wrong that Akuma's voice sounds a lot like Blanka's, you can opt for his Japanese track. I initially assumed I'd despise all the English acting and snob out like a purist, but most of it's just fine.

My only real complaint about Street Fighter IV is that the trial mode represents a missed opportunity to help brand-new players get into the game, and perhaps the genre, as well. I only know what I know about Street Fighter because I've been playing and watching it since the early 1990s. Will it take 20 years for new players to acquire the same bits of knowledge that I have? The good news is that Street Fighter IV is a game so great that playing it for that long doesn't immediately sound out of the question.
Jeff Gerstmann on Google+
Load Comments 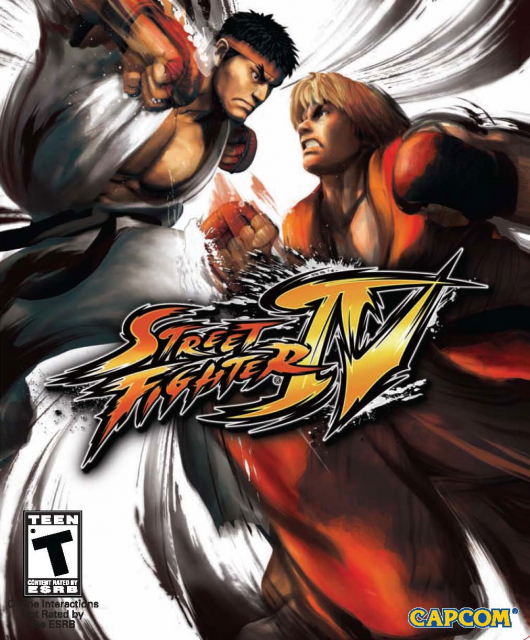