by Patrick Klepek on November 20, 2013
Share:TwitterFacebookReddit

Nintendo has knocked it out of the park once again, making its latest platformer a must play.

Nintendo is a company faced with a seemingly impossible task over and over again: remixing nostalgia. Damned if you do, damned if you don’t. This means Nintendo is constantly trying to reinvent what's come before without betraying the long-standing reasons people are there in the first place. It’s hampered The Legend of Zelda series for years, but the team behind Super Mario Galaxy has shown how to pull this daunting challenge off over and over again. Super Mario Galaxy was both an evolutionary and revolutionary approach to a Mario game, finding new ways to make Mario fun to play with in 3D. Super Mario 3D Land, however, reinvented the very concept of playing a 2D Mario game set within a 3D space. This team’s latest, Super Mario 3D World, explores this idea even further. In short, Super Mario 3D World is terrific.

Both in look and feel, World will be intimately familiar to anyone who's spent time with Land. But there are some key differences. World brings back the ability to choose between multiple characters with distinctive and meaningful differences, an idea sadly abandoned after (the still underrated) Super Mario Bros. 2. It's back in World, with players choosing between Mario (he's good at everything), Luigi (he can jump really far), Peach (she's slower but can briefly float at will), and Toad (dude's fast as hell). Later in the game, Rosalina from the Galaxy games is unlocked, and she comes equipped with a nifty spin move that, like Peach, can often save an ill-timed jump. Peach and Rosalina were my go-to characters in World, as their quirks often got me out of a jam, and it's not often that World rewards the player with a huge advantage for being faster. Occasionally, the game will lock some secrets behind buttons that require specific characters to trigger, and Peach's slow speed meant I was unable to gain enough momentum to reach the top of some flag poles. But importantly, these are not palette swaps to make multiplayer more visually interesting, and I suspect players will have their own arguments and preferences for "the best character" in the game. It adds a new-ish wrinkle to the gameplay, and it's a welcomed one.

Let's get one thing out of the way, though. World continues Nintendo's experimentation with multiplayer in a Mario game, but as in the past, it's a superior experience solo. That said, the multiplayer is far less chaotic than the 2D incarnations, as the additional environmental space gives players a chance to avoid one another. When additional players become involved, the remarkably deep exploration aspect of World evaporates. Instead, the experience becomes about the one thing multiple people can silently agree upon: progression. Two players remains the sweet spot for engaging with multiplayer without a descent into utter chaos, but as in the past, you'll want to tackle this one alone.

There are some wide-reaching consequences to the game's multiplayer design, however. Accommodating up to four characters in every stage means the level design has the feeling of being stretched out, and it means there's less precision platforming early on. World more than makes up for that with rapid-fire creativity, and the game's levels are still crafted in a way that makes obsessive exploration a completionist joy, not a psychological curse. Collectibles have become something of a joke in many games, a reason to unlock an achievement, rather than a reward for being curious. World continues a series tradition of encouraging you to explore every nook and cranny, rewarding the player not only for the sheer act of discovery but having the bits and pieces eventually unlock some of the game's most brutal stages. (Land's final, crazy level took me several hours to complete, even though its actual "length" was about average.)

Without spoiling the game's secrets, the development team seems aware that much of the game isn't asking for lots of precision. At one point, it clearly signals to the player there's no more goofing around, and the game's about to get very serious about reflexes. In Land, this came at a "gotcha!" moment when it seemed like the game was ending. In World, there are several "gotcha!" moments, to the point where it's hard to fathom the game ever ends. Instead, it only continues to get better, harder, and more interesting. Despite so many Mario games under this team's belt, almost every stage promises something new. So many games, platforming or otherwise, come up with a new trick and slavishly beat it into the ground. Here, an idea comes and goes like a ship in the night, possibly to never return again. Even if it does, you can rest assured it's been subtly tweaked.

And just as the multiplayer has made the levels wider, the new cat suit has shifted the levels taller, as well. There's a sense of verticality to World that hasn't been present in a Mario game before, and it's going to compel you to keep that cat suit on, come hell or high water. The cat suit allows you to briefly but swiftly climb up almost any surface in the game, useful for all sorts of reasons, including making your way to the top of a flag pole. It feels like cheating, but you're smiling the whole time. Clever secrets functioning as reasons to come back to old stages has been a mainstay of Mario games, especially in the 3D era, and the cat suit means you're suddenly looking in spots that were once unreachable. Just because the camera can't show the top of the structure around you doesn't mean a green star isn't hiding there, and one often finds themselves scampering up everything around them in search of what's hidden.

A surprising bonus is that this is the prettiest Mario game yet. World brings Mario into the high-definition age in a way New Super Mario Bros. U didn't dare try, and the results are astounding. Nintendo's general aesthetic, one that emphasizes simplistic and memorable designs with bold and striking colors, looks gorgeous here. It's not simply that World immediately benefits from an art direction that's flourished on technologically limited platforms, though. World begins showing what Nintendo is capable of as it's becoming more comfortable with modern graphical techniques. World sports some brilliant but subtle lighting, tiny additions that are the most visible in the game's fire-filled stages. And maybe it's just me, but I have to admit a twinge of disappointment upon realizing World isn't playable in stereoscopic 3D, a onetime-gimmick that Nintendo has expertly refined on 3DS, transforming 3D into a surprisingly essential part of the visual experience on its handheld platform.

And there are so many other, small touches that brought me joy during my time with World. The occasional Toad-focused puzzle stages that remove jumping from the equation, a haunted house stage where the visuals become black-and-white, the lovely and memorable orchestrated music, the way characters will occasionally meow at the screen while wearing the cat suit, the discovery that completely hidden blocks appear on the screen by blowing into the GamePad's microphone, the many nods to forgotten enemies in Mario's long history, and...well, I could keep going.

Suffice it to say, World continues to make the case that it's possible to reinvent a classic over and over again. World might not be the same revelation that Super Mario 64 or Super Mario Galaxy were, but it doesn't look at traditions as a crutch, and instead uses what you know as a way to delight and entertain. 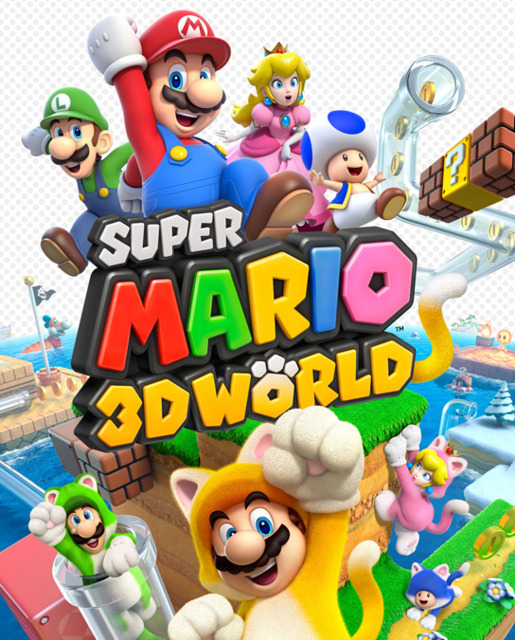