by Ryan Davis on May 21, 2010
Share:TwitterFacebookReddit

Super Mario Galaxy 2 sees both Nintendo and Mario himself in top form, delivering an adventure that's as consistently exciting and inventive as ever.


If you look at the history of the core Mario games, it's actually rare to see as direct a sequel as Super Mario Galaxy 2, particularly over the past decade. While the game's development history--which saw it start its life as Super Mario Galaxy 1.5--might paint it as an also-ran, the finished product is about as polished and propulsive as any Mario adventure before it. A number of appreciable new gameplay concepts have been introduced here, including that infernal dinosaur Yoshi and a whole new wardrobe of clever suits, and the levels are even more ambitious with the crazy ways in which they play with the relative laws of gravity. So it doesn't have quite the same New Mario smell as the original Galaxy, but there are far worse games to draw favorable comparisons to. Maybe it's been just long enough since the first one came out for my memory to fade, but I still found the style of action as fun and fresh as I did two and a half years ago.

If there's any consistency between most Mario games, it's the jumping-off point, and Galaxy 2 stays true to the rich tradition of Bowser kidnapping Princess Peach and Mario giving chase. This time Mister Mustache teams up with a ragtag crew of lumas, those weird little raw-chicken-shaped star people from the first Galaxy, on a planetoid spaceship that looks like a topiary version of Mario's head. Cruising across the universe in this spaceship--or should I say, faceship--Mario follows a mostly linear, Super-Mario-Bros.-3-style map system from one level to the next. Though there are still star bits, coins, and a few other trinkets to collect and cash in for various power-ups and unlockables, your main concern is collecting stars, which is what throttles your progression from one level to the next. In a structure that can be traced all the way back to Super Mario 64, most levels also feature secret stars and secondary stars for you to go back and collect.

Traditionally, a lot of those bonus stars are optional, but the star requirements in Galaxy 2 are pretty high, and other than the deliberately crazy-hard and brutal bonus world you unlock after you finish the game, I didn't fee like I had left very many stars on the table by the time the credits rolled. I don't think Galaxy 2 is actually that much more difficult than the first, it's just that a lot of the harder stuff ends up being part of the critical path. I definitely engaged in my fair share of one-sided yelling matches with my TV playing the game, but it almost always seemed fair, and there was only one occasion I can recall where I felt like it was the game's fault and not my own. It's tough, but it provides you with more than enough tools to get the job done.

Personally, as a big-time Super Mario Bros. 3 fan, I love seeing Mario in crazy-ass suits, and this game represents the single largest influx of new suits since then. The fire suit, the bee suit, and the spring suit all return, and the game also introduces a cloud suit that lets Mario conjure up a series of floating platforms; a rock suit that lets him turn into a rolling boulder to smash through enemies and obstacles; and a boo suit that turns him into an officious-looking, mustachioed ghost that can float around and pass right through certain obstacles. The powers they imbue you with are unique, and the game consistently explores their impact on the gameplay in interesting ways.

Galaxy 2 also marks the return of Yoshi. Now, I'm historically not so fond of that cutesy, inexplicably boot-wearing dinosaur, but his abilities make him a smart addition here. Yoshi can gobble up enemies, turning specific types--like those nihilistic Bullet Bills--into deadly projectiles. You'll find special swing points that only Yoshi can use, as well as highly reactive fruit that can turn Yoshi into a leaky balloon, a land-rocket, or a walking lantern. For as many new tricks as Galaxy 2 introduces, I never felt overwhelmed by the options, and the game does some smart handholding, providing entirely optional tutorials whenever a significant new gameplay concept is introduced. It's a touch that helps keep the game accessible to those not already familiar with the odd nuances of the original Galaxy. At the same time, the vast array of abilities you have at your disposal helps keep things feeling fresh throughout. This isn't a short game, and it took me a good thirteen hours to make my way to my final encounter with Bowser, but it was never overly reliant on one specific ability, and I always felt like I was seeing something new.

Much of that credit, though, has to go to the level design, which seem much bolder than before, and more willing to take some weird risks with the planetoids and abstract platforming that set the tone in the original Galaxy. The relative virtues of gravity are far more contentious, levels will fold in on themselves in a way that's reminiscent of what you might get if MC Escher did origami, and there are entire levels that hinge on the rhythmic fluctuations of physical law. Yet these heady concepts are executed so deftly that I never found myself confused or uncertain about that behavior. The only real downside is that some of the gravity play might be too intense for certain players, and if games like Portal trigger your sense of vertigo, you may have some problems staying right-side-up here.

The Mario name represents one of the most potent payloads of nostalgia in video games, something that Galaxy 2 certainly taps into, but it does so with a fairly surprising amount of restraint, and in ways that ultimately benefit the finished product. In full throwback fashion, the game will fluidly switch between full 3D movement and pseudo-side-scrolling action as the levels demand it. There are Boo houses, there is a giant world, and there are full-level homages to Super Mario 64 and Super Mario Sunshine, the latter of which is (arguably) better than anything that was actually in Super Mario Sunshine.

Of course there's the music, which trades both in remixed classics and some jaunty new tunes. And unlike the first Galaxy, you don't have to collect every last star in order to play as Luigi, who will pop up in random levels and offer to take over for Mario for a little bit. I didn't feel like he changed the action much, but it's fun to see the lesser Mario brother getting some play. If there's one Mario trope that gets revisited here that I could've done without, it's the repeating Bowser encounters, simply because they end up diminishing the game's final encounter. After some of the challenges I had to fight through to get to that point, it felt just a little underwhelming.

For all the meaningful changes and additions that have been made, this is still more Super Mario Galaxy--which is to say that it looks and sounds about as good as a game for the Wii ever has, with consistently inventive level design, and exceptionally responsive gameplay. We all like to give Nintendo a hard time for pandering to casual and nostalgic audiences, but when it brings its A-game, it's still able to deliver a fun, accessible game experience that's second to none.
Load Comments 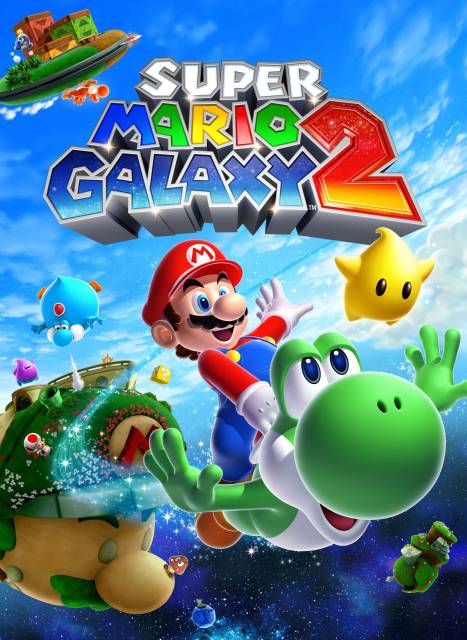