by Jeff Gerstmann on November 3, 2009
Share:TwitterFacebookReddit

Tekken 6 is a great fighting game, but it's bogged down by a lot of extraneous baggage.


Tekken was once the bellwether for the coming generation of consoles. Seeing Namco develop home versions of the first few Tekken games that surpassed the arcade games upon which they were based was a magical moment back on the original PlayStation. It was the moment where you could immediately see arcades becoming less relevant, as the machines hooked up to our TVs were now just as impressive as the stuff you had to drop quarters into to play. These days, it's not quite the trendsetter that it used to be, but the Tekken series keeps trucking along with Tekken 6. In addition to also appearing on a non-Sony console (!), Tekken 6 has some very sharp fighting that builds onto the existing framework nicely with some cool new moves and characters. But just about everything that surrounds the actual fighting part of this fighting game is pretty disappointing, making this one strictly for Tekken fans who have enough local opposition to keep things interesting.

The new fighters added to the fray include Lars Alexandersson, a Scandanavian dude with ties to the Mishima bloodline--which means he has excellent hair, obviously. Alisa Bosconovitch is a pretty Japanese robot girl who can make chainsaws pop out of her arms. These are the two new "Bloodline Rebellion" fighters that appeared in the second arcade release, but if you've only been following the series via its home releases, then the four fighters from the first Tekken 6 release--Bob, Leo, Miguel, and Zafina--are also new. The six additions to the roster fit pretty well and are fun to learn and fight with. If you count alternate versions of the same character (specifically, Kuma's second player "outfit" is really Panda), there are over 40 characters to choose from. It's a hefty roster, thick with the series' favorites.

The fighting style in Tekken 6 hasn't changed dramatically. There are some changes to the combo system that allow for longer juggles, adding more depth to the combat for players who can pull off moves within very specific timing windows. For players who aren't already in too deep, though, Tekken has always felt friendly to new players, provided you're playing against players of the same skill level. Tekken 6 keeps up that tradition, even if the game's practice mode doesn't offer much to help you truly get a real understanding of the game, just a bunch of button-pressing notation that'll only really be of use to those already steeped in the franchise.

When you combine Tekken's high-level play--which is all about precise timing--with Tekken 6's network code, you get varying degrees of disappointment. Even at its best, Tekken 6's online play feels like a completely different game, forcing you to think a second or two ahead and plan your moves out way too far in advance. It's not entirely unenjoyable, but you give up so much of what makes Tekken tick that it's really not worth it. If you want to play Tekken 6 competitively, plan on rounding up your friends and getting them all into one room. It's unfortunate, because the game has things like character-specific win/loss records, plus it's a good way to show off the items you've purchased and used to customize the look of your fighters. In unranked matches you can get up to four players in one game for a quarter match sort of setup, but considering the game usually can't handle a one-on-one matchup, getting spectators in there seems like a bad idea.

Most of the other modes fall into the typical fighting game loadout, with a survival mode, a team battle mode, and time attack. It also has a "ghost battle" mode, which is something that's popped up in different forms in recent Tekken releases. Here you can battle against different AI profiles ("ghosts") that come on the game disc. They're a bit more interesting to fight than the standard AI, plus you'll never run into the arcade mode's ridiculous end boss, which is certainly a plus. When you hit the game's online menu, it takes the ghosts that you've made by playing the game and uploads them. You can also download ghosts of other players. It's probably not perfect science--the ghost doesn't totally ape your style or anything like that--but it's a neat idea that lets you feel like you're fighting against, like, an answering machine version of the folks on your friends list. Unfortunately, there doesn't seem to be any sort of notifications about how well your ghosts are performing out on the Internet. Considering the game's sketchy online performance, the ghost battle mode is probably the best thing you can do with Tekken 6 unless you've got another player in the house.

It's the first thing on the game's menu, but the Scenario Campaign mode is probably the worst thing in Tekken 6. It's an expansion on the old Tekken Force mode from Tekken 3, and it wraps a bad brawler around Tekken's fighting mechanics. While I appreciated the motion-comic-style intro, which details the "who threw whom into which volcano" parts of the Tekken storyline, the bulk of it, which involves Lars losing his memory, getting it back, and fighting a ton of Jack robots, is pretty dull. Also, even though you can play as any character in the campaign mode, the story bits always put Lars back into the lead role. So it goes from Lars talking about how he's got to find Heihachi to Paul Phoenix doing the fighting (because that's who I decided to pick), then back to Lars again when the cutscenes come up. While it's nice that you aren't forced to play as Lars for the entire game, it makes the whole thing feel extra sloppy.

Though it's getting easier and easier to notice a lot of reused animations from previous games in the series, Tekken 6 looks really nice. The characters are big, the game moves really quickly, and the backgrounds are cool. The ability to customize characters is present, as it has been in the past, letting you do a lot of weird things to the fighters. If you want Paul to rock an eyepatch, or if you want Kazuya's robot costume to have a glowing aura around it, you can spend some of the fight money you earn in the game's various modes to make all of that happen. The game has a pretty good soundtrack, though there's also a lot of stiff voice acting, especially in the campaign mode.

The awkward campaign mode would be completely forgettable if Tekken 6 worked better online. But with it ranging from "almost acceptable" to "pre-patch King of Fighters XII" in connection quality, it's hard to recommend to anyone who doesn't already have a local crew of Tekken fiends at their disposal. If your crew is nuts for Tekken, though, the fighting in Tekken 6 is hot enough to make it worth your while. 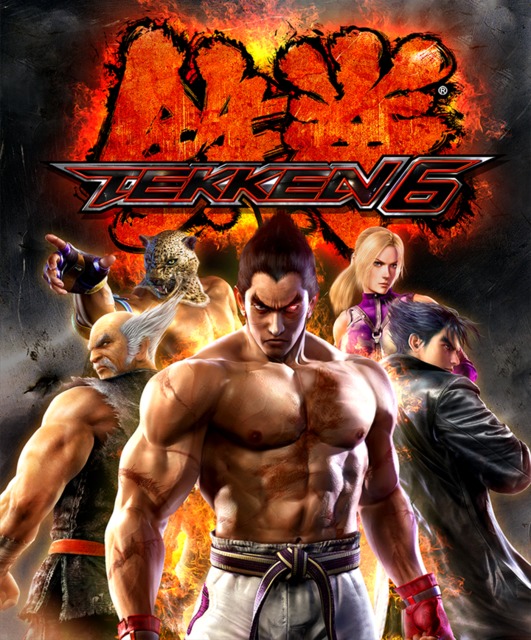