by Ryan Davis on September 9, 2009
Share:TwitterFacebookReddit

The Beatles: Rock Band is not the first band-specific music game of its type, but it might as well be the last. Harmonix and Apple Corps have come together (sorry) to create a package that pays carefully enthusiastic tribute to the musical legacy of those four lads from Liverpool, and I'm not sure you could ask for more from a game that focuses on the Beatles--or, really, any band. Sure, if you measure this by the cold metrics of gameplay features and the length of the song list, The Beatles: Rock Band comes up quite short against Guitar Hero 5 or even Rock Band 2. The gameplay itself is, generally speaking, much easier than what genre fans might have come to expect by now. And if you're expecting all the sordid details on the band's slow and tense disintegration, you're better off watching Let It Be, because this is definitely the glossy fan-club version of how things went down. Even with those restraints in place, The Beatles: Rock Band is a fun and occasionally magical experience, whether you're a Beatles fan or not.

There are, essentially, two modes of play in The Beatles: Rock Band. There's a quick play mode, which lets you jump into any song you'd like to, online or off, with one to six players. Rock Band is usually a four-piece setup, and those two extra players come from the two additional mics you can plug in for the two- and three-part harmonies found in a number of the Beatles' songs. It's the one big gameplay addition the game makes to the Rock Band formula, and it makes a lot of sense for The Beatles. It's also more demanding of actual musical skill than anything I've ever seen from one of these games, and it certainly requires more tonality than I can personally muster. As with the other instruments, there's a tutorial for the harmonies that tries to explain things plainly enough, though I felt like my grasp of it was still tenuous once the tutorial ended. If you're really determined to master the vocal harmonies, though, it's easy enough to jump into practice mode or just turn on the no-fail option when you're playing normally.

Quick play is where you'll go when you and your drunk friends just want to annoy the neighbors with “Yellow Submarine,” but the story mode is the heart of The Beatles: Rock Band. This is a loosely biographical mode that moves you through the music of the Beatles in chronological order, with the venue and the look of the Beatles themselves changing at regular intervals. The way the game lays out the history of the Beatles' career is perhaps the most impactful aspect of the story mode, highlighting just how much the band's music evolved over a relatively brief seven-year period. You'll start off performing songs like “Twist and Shout” and “I Saw Her Standing There” at The Cavern Club, a converted air-raid shelter in Liverpool that The Beatles played at regularly. From there it's “Can't Buy Me Love” and “A Hard Day's Night” on the Ed Sullivan Show, followed by more middle-period Beatles material performed at Shea Stadium and Budokan, all incredibly iconic live performances for the band.

Reflecting the Beatles' decision to stop performing live, the game shifts the venue to Abbey Road for several stages. The game takes some terrific creative liberties during these stages, relying on often-psychedelic “dreamscape” visuals to keep things interesting. For some songs, the dreamscape concept works brilliantly. “Yellow Submarine” is the first one you'll see in story mode, and the way it gradually shifts from the studio to a trippy underwater playground--complete with that titular submergible and the Beatles donning their colorful costumes from the animated movie of the same name--is perhaps one of the most striking examples. Similarly, songs from Sgt. Pepper and Magical Mystery Tour often find the band donning the iconic costumes associated with those albums. There are definitely songs from the Beatles' studio era that don't lend themselves as well to such explicit imagery, but even when it's just colored lights and acid-laced filters, the dreamscapes bring a lot of playfulness to the game. The character models bring a lot of life to the game as well, opting for the mildly caricatured look of regular Rock Band characters over anything approaching photo-realism, though they also look a bit more detailed and less dead in the eyes than regular Rock Band characters.

It all wraps up with the live show atop the Apple Corps building, the last time the four would ever perform together live. Again, an incredibly iconic performance, though it's the one where the reductive powers of music games felt a little uncomfortable for me. In reality, the band was barely on speaking terms at this point, but in the game it's little more than a backdrop for more songs. Expecting the game to try and convey the discord within the group and the bittersweet moment of old friends with complicated relationships playing one last show together is admittedly pretty demanding, but it speaks to the emotional investment that the Beatles can evoke from a listener.

With a grand total of 45 songs on the disc, this is by no means the definitive collection of the Beatles' music. There are a few songs on the disc that aren't “essential” by any means--the Ringo-sung cover of The Shirelles' “Boys” and the "Tomorrow Never Knows"/"Within You Without You" mash-up from the Beatles-themed Cirque du Soleil show Love stick out to me the most--and several of my favorite Beatles songs aren't in the game at all. On the other hand, there are several songs in the game that I now consider some of my favorites after playing The Beatles: Rock Band, and it's a nicely rounded sampler that seems to go out of its way to give each member of the band his dues. Additionally, Harmonix has been pretty committed to releasing downloadable content for its Rock Band games, and The Beatles: Rock Band comes with “All You Need is Love” available as Xbox 360-exclusive DLC on day one, with promises of Abbey Road, Sgt. Pepper's Lonely Hearts Club Band, and Rubber Soul DLC in the near future. Of course, there's a finite amount of Beatles material to be mined for DLC, and unlike all that other Rock Band DLC, and music released for The Beatles: Rock Band won't be compatible with any other currently available iterations of Rock Band.

This is a decision indicative of the control that Apple Corps held over the development of The Beatles: Rock Band, and it seems to inform other choices, such as the fact that using the whammy bar to goose more “Beatlemania” (otherwise known as overdrive in a regular Rock Band game) doesn't actually affect the sound of the notes. It also potentially influenced the fact that The Beatles: Rock Band isn't as hard as other contemporary music games. Everything up to the hard difficulty feels toned down, though there's a significant jump in difficulty when you hit expert.  Some of the difficulty, though, seems inherent to the music. The Beatles didn't make especially complicated music, so it goes to reason that a game based on that music wouldn't be too complicated, either.

The Beatles: Rock Band is absolutely brimming with details and bonus content that are sure to please fans. Success in the story mode, for example, is rewarded with behind-the-scenes photos of the band, and accruing enough photos will unlock a series of interesting videos of the band as well. One of my absolute favorite touches in The Beatles: Rock Band is how, during the Abbey Road years, you'll hear studio noise as a song loads. It's not much more than idle chatter, analog equipment hum, and the occasional practice riff, but it's stuff that's all been pulled from the master tapes at Abbey Road, and it goes a long way towards establishing a sense of authenticity.

The Beatles: Rock Band sets a new standard for how band-focused music games should be executed, one that will be very difficult to match. Beyond all the stylistic flairs and the fan-service touches, this is just an incredibly fun, incredibly accessible bunch of music, with very little filler in its track listing. This isn't a music appreciation class, and I'm not at all qualified as a music critic, but I feel very comfortable saying that the Beatles is one of the most “important” musical acts of the past, let's say, 60 years. This significance warrants the time and detail that has gone into The Beatles: Rock Band, and I'm not sure that there's another band out there that deserves the same treatment. This is a first big step into the digital age for The Beatles, but it might also mark the end for band-specific music games.
Load Comments 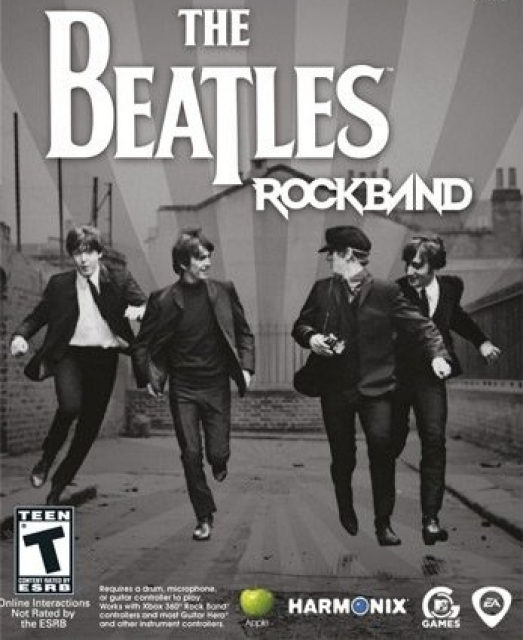