by Alex Navarro on February 7, 2012
Share:TwitterFacebookReddit

Digital Extremes ably picks up where Starbreeze left off, crafting a satisfyingly brutal adventure that only rarely loses its way.

At this point in time, it's probably safe to assign the "cult classic" badge to Starbreeze's The Darkness. After all, it's been nearly five years since that game introduced us to the delightfully gory adventures of mobster-turned-demonic killer Jackie Estacado, and yet it has continued to maintain a vehement, enthusiastic fanbase. It's one of those games that never quite became a runaway success, but has seemingly managed to entice new players in small doses over the last several years, and continued to make new fans long after its release.

You wouldn't be incorrect to feel some trepidation at the possibility of a sequel coming so far removed from the first game's release, especially a sequel developed not by Starbreeze, but by Canadian mercenaries Digital Extremes. The tone and feel of The Darkness was something oddly specific that you'd be right to fear wouldn't come through after being filtered through an entirely different studio and its own proprietary game engine. Fortunately, somehow, some way, Digital Extremes pulled it off. The Darkness II is a game that effectively channels the brooding atmosphere and brutal, fast-paced combat of the original while managing to insert a few quirks of its own that actually benefit the overall experience. Most importantly, the plot retains the sometimes hopeless, always vengeful flavor of the original game, keeping its hooks in you all the way through to the story's intriguing conclusion. It's not mechanically perfect by any stretch, and the campaign does lose some steam toward the very end, but the overall balance of The Darkness leans far heavier toward the pleasurable than the unlikable.

The Darkness II finds series antihero Jackie Estacado two years removed from the adventures of the first game. For those who haven't played the first game (you really ought to), the story does start out with an optional preamble that explains the basic elements of the original plot. It's a brief overview, but it's more than satisfactory, especially for those just looking for a refresher course on what previously took place.

In those two years, Jackie has managed to contain the dark essence within him, the demonic force that appears as sentient tentacles Jackie can command to brutally murder anyone in his path. Of course, that Darkness also has the ability to consume his very soul, hence why Jackie, having removed the antagonists of the previous game and slid into the role of a major New York City crime boss, has done his best to keep those powers under wraps...that is, until one fateful night. The Darkness II certainly kicks off with a bang, with a gangland assassination attempt by anonymous creeps inside a fancy Italian restaurant. It's not long before things go sideways, and suddenly Jackie is forced to call on his Darkness powers to save him from death.

But who are these guys? Why are they trying to kill Jackie? And who is this mysterious cripple who keeps popping up to say cryptically threatening things? It doesn't take long to find out. If The Darkness II has one story flaw, it's that it reveals many of its motivations pretty early on. You don't have to get too far into the story before you discover what it is that's propelling the occultist sect at the heart of the story. (They want to suck the Darkness straight out of Jackie's body and use it to take over the world, of course.). In fact, you pretty much figure all that out before Jackie even does. Not that such lack of knowledge would prevent Jackie from running around and killing a bunch of people anyway. He certainly does plenty of that, and with aplomb.

While the core storyline sounds pretty straightforward and nowhere near as nuanced as the story of the first game, it's in the smaller moments that The Darkness II truly shines. The script, penned by The Darkness comic series writer Paul Jenkins, keeps the player guessing less by obfuscating the goals of its antagonists, and more by focusing heavily on Jackie's own personal torment over the death of his girlfriend Jenny in the last game. Early on Jackie begins hallucinating, seeing visions of Jenny that blur the line between past memories and current reality. Jenkins also takes a cue from reality-bending films like Twelve Monkeys, shifting the player's known reality of Jackie as a mob boss to a mental hospital featuring people from his life as both patients and doctors. In the mental ward universe, Jackie's powers, lifestyle, and tragic history are all part of an elaborate delusion. The mixture of torment over Jenny's soul perhaps lingering in Hell and the constant questioning of which reality is even true makes for a much more interesting tale than the core "bad guys want the thing you have so go kill them" plotline, even if it doesn't always take full advantage of the possibilities those elements introduce.

Even in those moments where Jackie's motivations are fueled purely by murderous hate, the writing and voice acting keep you fully engaged with Jenkins' story. The Darkess had incredible voice talent that lent itself brilliantly to the sort of hyperviolent mob tale it was spinning, and Darkness II is absolutely no different. Brian Bloom is perhaps an even better voice for Jackie than original actor Kirk Acevedo, giving him just the right mix of grizzled hatred and weary pathos inherent to the character's current lot in life. From the various mobsters that make up Jackie's organization, to the sneering, hissing bad guys that make up the hated Brotherhood, everyone in The Darkness II does their part to immerse you completely in the story it's telling. And, of course, Mike Patton returns to once again lend his utterly creepy voice to the Darkness itself. Depending on your level of appreciation for said voice in the first game, is either a blessing or a detriment. Personally, I dig what he does, but I know some out there find him intolerable.

As you go through The Darkness II's campaign, you will kill a lot of bad guys. Like, a lot. Especially considering that the campaign itself only runs somewhere between six and seven hours. While that sounds pretty short, I honestly can't think of anything else the game really could have done to pad out its length. Perhaps it could have spaced out a few of its revelations a bit more in the early goings, but by the time you get toward its conclusion, there's not really anywhere else for it to go. It makes good use of the time it has, and manages to space out its combat sequences in such a way to where you rarely feel like you're being inundated with bad guys for no good reason.

Even when the game is flinging bad guys at you in heavy succession, the combat in The Darkness II is strong enough to make that feel more like a treat than an annoyance. Jackie has his usual array of guns (pistols, shotguns, assault rifles, and whatnot), as well as a host of new Darkness powers, including the expected tentacle slash attacks and execution moves. While the first game sometimes felt a bit repetitive simply because the array of abilities you had was somewhat limited, The Darkness II attempts to alleviate this by including a new skill tree system. As you kill enemies, you'll earn dark essence you can use to upgrade your weapons, your health, and even add to your array of Darkness kills. This is one of those rare games that leans heavily on "execution moves" for morbid thrill where I actually didn't get bored with them right away. There's a solid variety of kills, and the animations are often quick (and hysterically brutal) enough that even seeing them a few times in rapid succession is still a hoot. The one where the tentacle pulls the guy's spinal column out of his ass is perhaps my favorite, though I shudder to think what that says about me as a person.

These skill tree upgrades effectively replace the mostly unnecessary side missions of the first game. There is no real exploration or branching in the story to speak of this time around. The level designs are relatively linear, and save for a few moments where you control your Darkling buddy (a British-accented demon who enjoys pissing on corpses) through tiny vents and other crawlspaces, pretty much all you do in the game is shoot and eviscerate stuff. It is perhaps a testament to the pace and flow of the combat that I never really got tired of doing exactly that.

I certainly did get a bit flustered toward the end, where the developers clearly ran out of ways to upgrade the enemies in interesting ways and instead morphed them into bullet sponges equipped with seemingly unlimited quantities of light grenades (light, as you may recall, renders your Darkness powers unavailable, meaning you'll be shooting out a lot of street lights and flood lamps). It's one thing when they're decked out in Darkness-powered armor that's tough to crack, but it's quite another when it's just some schlub in a Brotherhood-issue turtleneck with a submachine gun who needs six shotgun blasts to go down. Some of those sequences are downright flustering, though thankfully there are only a handful of truly annoying moments.

Once you're done with the game, you have the option of going back through with all your abilities intact via the New Game Plus mode, or you can tackle The Darkness II's multiplayer side story. Titled Vendettas, this section of the game owes more than a bit of its design to the core concepts behind the Left 4 Dead series. You can choose to play as one of four different characters, each a cheerfully stereotypical (but not quite racist) caricature of one ethnicity or another that comes with their own unique Darkness powers. It's a two-hour campaign that traces some of the off-camera moments briefly mentioned in the main story, but mostly it's an excuse for you and a few friends to bludgeon, stab, and shoot the living hell out of anything unfortunate enough to cross your murderous path.

It's an intriguing diversion of a mode that might have been more were the developers a tad more adventurous with it. The combat is certainly satisfying in this mode as well, but the number of powers each character has is more limited, as are the number of skill upgrades available to you. The short length of the multiplayer campaign lessens the repetitive feel of it a smidgen, but save for those out for Achievements/Trophies, it's unlikely you'll be inspired to play through it more than once.

The easy argument to make against something like Vendettas is that it took valuable developer time away from the main campaign, but I don't think that argument holds up. Nothing in The Darkness II's story line feels out of place or unnecessary. It doesn't digress needlessly into side missions or other time-wasters designed to just keep you playing for longer stretches. Instead, Digital Extremes believed in the strength of both its combat system and Jenkins' script to inspire players to play through it again once the credits roll. And that confidence was not misplaced. Within an hour of finishing The Darkness II, I was already set to go back in and get my New Game Plus on--something I honestly rarely do. What can I say? The power of The Darkness II compelled me; odds are, it'll do exactly the same for you. 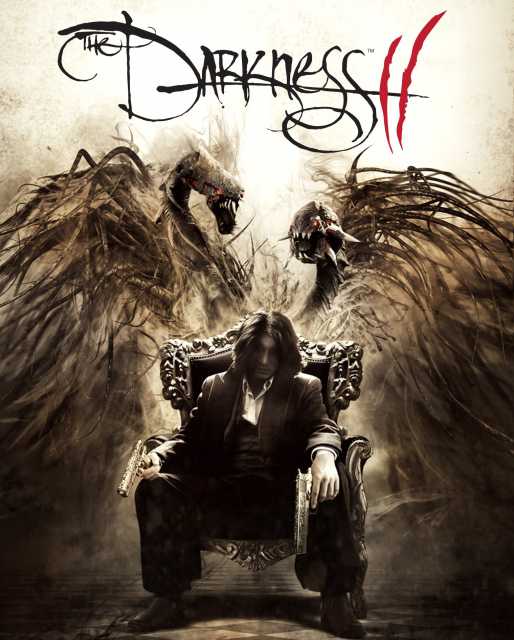