The King of Fighters XII Review

by Jeff Gerstmann on August 4, 2009
Share:TwitterFacebookReddit

The core fighting in King of Fighters XII is really sharp, but everything surrounding it is a little disappointing.


The long-running King of Fighters series has always been top-notch, and it's the flagship for SNK Playmore's style of 2D fighting. Over the years, the roster in the KOF series has grown and shrunk, move lists have expanded and contracted, and the standard three-on-three format has been tweaked around a bit. But one thing remained constant over the last decade: the character sprites. Until they released Mark of the Wolves and changed up his look a bit, you could always count on Terry Bogard to be standing there, in his jacket and hat, shouting "hey c'mon c'mon" at his opponent. But for the duration of the series, the game looked roughly the same. That's part of why King of Fighters XII feels like such an event. All of the characters have been redrawn. They're now larger on-screen, and more frames of animation are used. But even under all the fancy new art, the game still feels like KOF.

At the same time, KOF XII doesn't exactly feel like a great deal. The roster of 22 characters is pretty small by series standards, and fan favorites like Mai Shiranui are nowhere to be found. Also, the game is missing a lot of the little extras that gave the series its charm, like the special intro animations used in past entries to highlight rivalries between characters. Also, the game's arcade mode feels like it was thrown in without any thought to making it more than just a series of fights. You create a team and fight five teams as a time trial. Your score is the time it takes you to complete all of the fights. Other than a couple of cutscenes that talk about the nature of the time trials, there's really nothing else to it. There's no final boss, no character-specific storylines, nothing.

Without a meaningful single-player experience to fall back on, KOF XII is very dependent on the quality of its multiplayer. Naturally, this is at its best when you're playing against another local player, but the game also has an online mode. The online feels pretty spotty on both the PlayStation 3 and the Xbox 360, even after a set of patches designed to improve the online performance were released during the game's week of release. I've certainly encountered some matches that ran just fine, but more often than not, the game teeters on the edge of unplayability. It's too bad, because the online mode has a good set of features, including a six-player quarter match style of setup. On the PS3, there's a cool option for creating and managing clans.

It's a shame that the online and all of the other stuff that surrounds King of Fighters XII's gameplay isn't better, because the actual fighting game itself is really sharp. It sticks pretty close to the series' conventions, but breaks rank in a few spots by adding the "guard attack," which is a move that turns a block into a counter if timed properly. There's also a "blow back attack," which feels sort of similar to Street Fighter IV's focus attacks. If you hit someone with a fully charged blow back, it crumples them, setting you up for a follow-up attack. There's also a "critical counter" system that, when triggered, lets you unleash a quick flurry of attacks, almost like a Street Fighter Alpha 3 V-ism combo. The different systems are interesting and merge with the standard four-button SNK style pretty well.

The presentation in KOF XII is fine, but there aren't very many backgrounds to choose from. The characters are well-animated, but sometimes look weirdly blocky. You can turn on a few different filters to blur the blocky edges a bit, but at some point this just makes the fighters look very blurry against a very sharp background. If you're just directly comparing it to the previous King of Fighters games, it looks really impressive. But if you're looking at other modern fighting games, it's merely nice. The in-game music is fine, but the default English voices are kind of terrible. Also, there's a real lack of variety there. Hearing Kyo say "how do you like that heat?" after every fight gets tired after around two fights. I ended up switching to the Japanese language track very quickly.

The fighting at the center of King of Fighters XII is totally fine, but with everything surrounding that action coming off so half-cocked, there are a lot of annoying little barriers to enjoying that fighting. If you're planning on playing versus matches against local friends, go right ahead. But everyone else should probably wait a bit for a lower price, another set of online-focused patches, or both.
Jeff Gerstmann on Google+
Load Comments 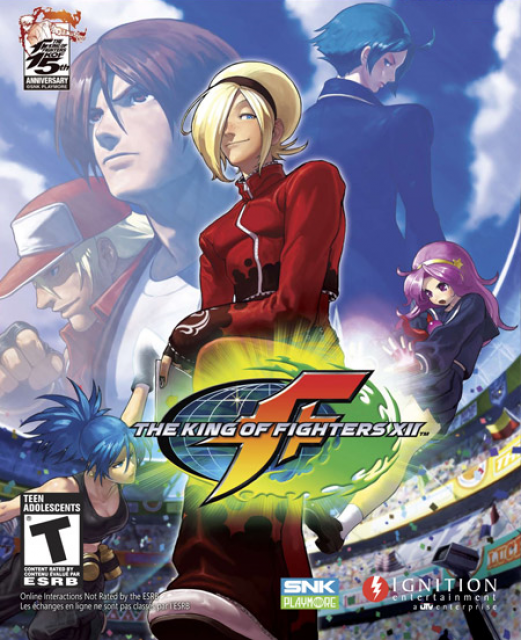