by Jeff Gerstmann on April 20, 2012
Share:TwitterFacebookReddit

The Pinball Arcade provides a safe virtual home for your pinball worship, complete with accurate re-creations of real tables and appropriately realistic physics.

Forget about pelicans or fish or whatever stupid animal out there is "going extinct" or "can only be viewed in a zoo these days." The endangered species that I care about is the pinball machine. It wasn't even 20 years ago that you could expect to see a healthy flock of pinball machines gathering at local bowling alleys, laundromats, and, before their native habitat was destroyed by careless hydrofracking, actual video arcades. These days, the best that most of us can do is to visit virtual pinball machines via packages like Pinball Hall of Fame or downloadable front-ends like Pinball FX2. The Pinball Arcade from FarSight Studios combines both of those things, taking the licensed, real-world tables from the developer's previous work on the Pinball Hall of Fame discs and bringing them to a zillion different downloadable formats, from Vita to Android, in an updatable package that starts with four tables and will expand to more via regular downloadable (and paid) updates. If you have ever connected with pinball, real or virtual, in the past, Pinball Arcade is quite awesome.

On consoles, the base package goes for $10 and includes four tables: Tales of the Arabian Nights, Ripley's Believe It or Not!, Black Hole, and Theatre of Magic. These four tables are notable for presenting a good deal of variety in eras and manufacturers, representing the titans of pinball manufacturing like Bally/Midway/Williams, Gottlieb, and Stern, the only manufacturer still creating real-world tables today. With that in mind, the developers should have a healthy number of tables to choose from for some time to come, and around a dozen additional tables have already been announced. On some platforms, like iOS, the first set of additional tables--The Machine: Bride of Pin-bot and Medieval Madness--have already appeared as a $5 bundle.

Perhaps the most important thing in a pinball simulation is its ability to handle the physics of an actual pinball machine. Here, The Pinball Arcade does quite well. The tables feel about as fast as they should, and the action on the flippers also just feels right. The ball itself carries an appropriate amount of weight, and in multiball situations, colliding balls careen around the table with angles that feel wholly appropriate. Personally, I think it plays a better game of pinball than Pinball FX2 does, mostly because FX2's balls feel a little light, causing them to rocket off the flippers in ways that just feel a little strange.

But physics only really tells one side of the story. Pinball Arcade also benefits from including some very sharp table designs. Black Hole has a really neat lower playfield that lights up when you send a ball down there. Theater of Magic has a rotating magic trunk that uses magnets to steal the ball away. Tales of the Arabian Nights has a huge, spinning lamp to aim for. Ripley's, as the newest table in the lot, has a little bit of everything, from shrunken heads to an abundance of penguin noises.

Control-wise, the Xbox 360 version lets you choose between the shoulder buttons or triggers for flipper control, both of which feel pretty natural. The analog stick makes nudging the table around pretty easy. On touch devices, like the iPad, you tap the lower quadrants of the screen for flippers, and your left/right nudge control can either be done by tapping the upper quadrants or by shaking the device itself, which is a neat idea that doesn't work particularly well. Overall, I found that I was in better control of the action with a gamepad, but the iOS version doesn't lag very far behind on either iPad or iPhone. For owners of "The New iPad," the game takes advantage of the higher-resolution display, making table art easy to see and read. But that visual quality comes with a trade-off, because the lighting on the iOS version looks awfully flat. Black Hole doesn't look as dark as it should. The Xbox Live Arcade release presents much nicer lighting, but the visuals aren't quite as sharp as an iPad 3 is. Minor stuff, overall. It's a great-looking pinball simulator on either platform, and both offer numerous camera options that let you get a few different angles on the action.

The real tables go a long way, showcasing some expert design work and grounding The Pinball Arcade as a real-feeling document of pinball's past, right down to the sales fliers used to sell the machines to arcade operators and a bit of additional historical data. With a long list of already-confirmed tables waiting in the wings, The Pinball Arcade stands out as a great counterpart to Pinball FX2's more fantastical take, though it lacks the more prominent leaderboards and competition that make Pinball FX2 stand out. If you're into pinball, you should probably own both. But if you're like me, and you're interested in something that more closely simulates real pinball, The Pinball Arcade just barely edges out the competition. 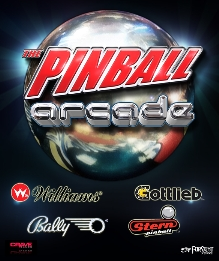