by Jeff Gerstmann on August 21, 2012
Share:TwitterFacebookReddit

Fall of Cybertron has some truly excellent moments, but you'll need to look past some serious downsides to enjoy the overall package.

You'd think that Transformers would be one of those home run/slam dunk sort of properties that would be able to turn out fantastic video games. But a brief visit to a list of every Transformers game results in a whole lot of sadness. The reasons why are perhaps a bit outside the scope of this review, but it sets the stage for what's to follow. We're dealing with a pretty low bar here. 2010's War for Cybertron, thus, quickly became one of the best Transformers games ever made, despite having a load of issues. Now, Activision and High Moon have created a follow-up with Fall of Cybertron, a game that improves upon the developer's past work. But it's still a pretty lackluster shooter that doesn't perk up until the end, and it's only truly suited for people who are fiending for a Transformers game.

Like its predecessor, Fall of Cybertron is a third-person shooter--or at least it is when you're in robot form. You plod around metallic environments, like a big robot should, taking aim at scads of nameless robot fodder with the left trigger and gunning them to bits with the right. Though you'll play as a number of different Autobots and Decepticons over the course of the game's campaign, the robot forms don't feel terribly different. Rather than going with custom weaponry for each character, you can pick up weapons from the battlefield. So the weapons feel like the sort of firearms you'd be likely to find in this sort of game, giving you sci-fi equivalents of burst-fire rifles, fully automatic assault rifles, shotguns, and rocket launchers. The heavy weapons, though much more limited on ammo, give you different effects, including one gun that forces an enemy to fight for your team, another that causes corrosive damage, and so on. The robot forms do, however, get a character-specific ability. So when you're playing as Jazz, you'll have a grappling hook. Cliffjumper can cloak himself. Optimus Prime can mark targets and call in Metroplex in some sequences for an airstrike. Some of the abilities double-up, though. Starscream, for example, can also cloak himself.

To make all those abilities work properly, the game locks specific Transformers to specific levels. So the Jazz level is specifically designed with a lot of grapple activity in mind. The Vortex level is primarily meant to be experienced in vehicle form, since he's a helicopter/jet in that form. The vehicle forms are where the different characters get a little more unique. The aforementioned Vortex has a Gatling gun and powerful bombs when he's a vehicle. Megatron, a hover tank, simply has his one big cannon, but it feels like it's more powerful than just about anything else in the entire game. You can transform back and forth just about anywhere, but the game usually makes it pretty clear when you're expected to turn into your vehicle form. Driving through the game's corridors ends up being sort of a hassle, because the floaty hovering and strafing that every ground-based ride is saddled with isn't much fun to control.

That's probably the larger problem here. The act of moving around these environments and carrying out your tasks really isn't much fun. There's no cover system in Fall of Cybertron. That's not to say that every third-person shooter absolutely must have a cover system, but instead of coming up with some clever alternative, the answer is to simply manually stand behind objects, which obstructs your view to the point where the developers had to put in and then emphasize a "switch your shooting hand" button that swaps the camera view. This is one of the problems that dedicated cover systems are sort of designed to fix. It certainly doesn't help that, throughout much of the game, you'll see robots from both factions hiding behind cover. Are your robots simply too proud to hide?

Maybe it'd be a little easier to stand if the robots weren't so frail. When you think of Megatron you think of an unstoppable force that shreds through lesser Transformers like they were Gobots. Instead all it takes is two nameless, identity-less shotgun-toting robots to get a little too close and let loose and you're forced to reload your last checkpoint. The game only stops to get its power fantasy on when you're controlling Bruticus and, in a chapter that's been shown off quite a bit prior to the game's release, Grimlock. The Grimlock chapter comes late in the game and puts you in control of a Transformer that can't transform at will. And instead of shooting the same small handful of weapons at all your enemies, Grimlock carries a sword. The melee doesn't feel great and when you do build up a rage meter of sorts and get into your dinosaur form, maneuvering and lining up your attacks feels cumbersome rather than cool. It's the sort of style change that should be a cool payoff... but it isn't.

Instead, the actual payoff comes in the final chapter. It's an incredibly dynamic piece of action that has you quickly bolting from one character to the next as the Decepticons attempt to stop the Autobots from escaping their dying homeworld. One moment you're Soundwave, leading a boarding party and ejecting tapes all over the unsuspecting Autobots. Then it quickly shifts focus to another character, and another, and another, each of which is playing a different role in this larger conflict. It creates a series of manic moments that feel incredibly cool and take advantage of the ensemble cast in some really great ways. It'd be hard to deal with a full game like this, since the pace would be impossible to keep up, but when you put it up against the slow, repetitive pace of the rest of the campaign, it puts the rest of the game to shame.

Fall of Cybertron also has competitive and cooperative multiplayer modes. The competitive action gives you team deathmatch, CTF, capture-and-hold, and a headhunter mode. It's also class-based, with different classes getting access to different weapons and abilities. Scientist-class robots have a heal beam, for example. Experience is earned on a per-class basis. A lot of the same control and mechanic problems from the campaign exist here, as well, but the competitive multiplayer also has the game's coolest feature. You can create your own Transformers.

Not from scratch, of course. The game has a pile of different arm, shoulder, head, chest, and other options to choose from, letting you customize your form. If you want to just create a specific Transformer, you can purchase a whole armor set. I, for example, just wanted to look like Shockwave. The chest piece determines what your basic vehicle shape is, but the other parts make a mark, as well, letting you put specific wheels on your car forms or choose just the sort of wings you want for a jet form. It's a neat idea that looks pretty great.

Escalation is Transformers: Fall of Cybertron's wave-based survival mode. You'll face 15 waves of enemies and earn currency along the way that can be used to buy more ammo, pick up new weapons, and open up additional areas in the levels. Here, you'll play as specific four-bot crews, each with specific abilities like the heal beam, an object that regenerates ammo for players that stand within a specific radius, and so on. It's absolutely functional.

Visually, the art and overall style shines through a lackluster frame rate. When the action heats up, everything chops up. Some of the in-engine cutscenes look pretty bad as a result, which robs some of the game's grander moments of their impact. But the game strikes the right balance between robots and vehicles that look appropriate in this Cybertronian environment and the G1 look and feel that most fans seem to want. Jazz and Cliffjumper look fantastic. Optimus Prime's robot form is pretty sharp. Shockwave, despite not having a voice that fits with the voice I expect to be coming out of his blinking... eye-thing, looks great. Even the vehicle forms look sharp, as long as you're prepared to handle the notion that Megatron is a hover tank instead of a big flying pistol. Cybertron is also depicted quite well, with plenty of scenery changes that, for a planet made entirely of metal, manage to give the campaign a good deal of visual variety. Again, it's just a shame that you have to see all this through a lens that can't keep up with the action. The PS3 version is saddled with an audio issue, causing some dialogue to get cut off or play slightly later than it should, making some of the in-mission conversations sound stilted and unnatural.

The highs in Transformers: Fall of Cybertron are very high. The final chapter and the way it presents its world are awesome things to see if you care about the Transformers franchise. It rewrites origins in ways that feel elegant, especially when compared to things like the movie trilogy. And it has the right idea with character-specific abilities that help to make the individual Transformers feel different. But it doesn't go far enough in that direction to stand out, and it ultimately feels like it's being held back by its by-the-numbers shooting. There are some great ideas here, but you'll have to wade through a pretty thick set of drawbacks to enjoy them. With that in mind, it'll really help if you're the sort of person who really cares about the Transformers franchise. 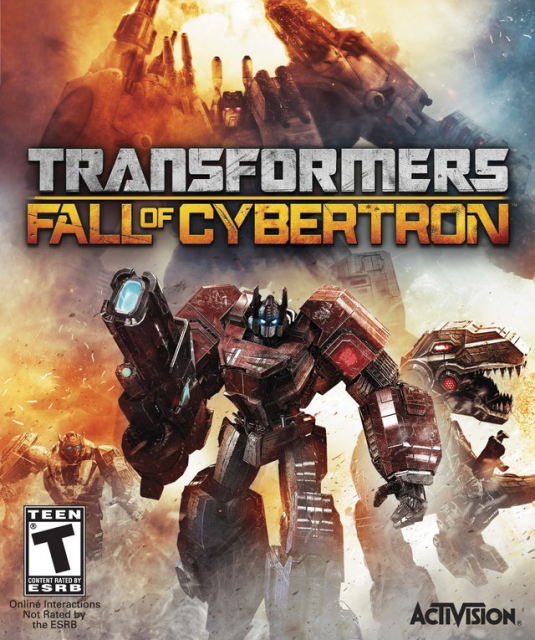