Drew and Jeff enlist in a stunning and sobering WWI adventure game. Don't you DARE touch that dog, Ubisoft.

by Alex Navarro on July 2, 2014
Share:TwitterFacebookReddit

Ubisoft Montpellier's take on the first World War is a surprisingly heartfelt adventure.

A video game about war is perhaps the least novel thing you could create in our medium today, which is one reason why Valiant Hearts: The Great War is such a surprising thing. Developed by Ubisoft Montpellier, Valiant Hearts examines the aspects of war that are most often brushed past or ignored altogether in games. This is a game concerned with the human element of war, the stories of the people forced to fight in these terrible conflicts, the people displaced by violence, and the relationships that keep them going in the face of terrible hardship. In some respects, it's a clumsy effort. Its narrative relies too heavily on situational convenience and generic villainy at times, and its gameplay is rarely the best thing about it. Yet Valiant Hearts remains compelling throughout its half-dozen hours, thanks in no small part to its deft handling of the many emotional highs and lows that make up its small, but wonderful tale.

Set against the backdrop of World War I's western front, Valiant Hearts tells the story of four people whose lives are gravely affected by the conflict. Karl is a young, German-born man living in France when the war begins, and despite his protestations, he's sent from his home back to Germany, forced to fight for a nation he no longer calls home. Emile, Karl's father-in-law, is forced to take up arms for his home nation of France. Elsewhere we also meet Freddie, a burly American motivated to fight largely by personal vengeance, and Anna, a Belgian medic who moves from battle to battle doing whatever she can to patch up the wounded.

These four protagonists (along with a trusty dog who helps out from time to time) find themselves floating in and out of each other's lives, reuniting during various battles, only to be torn away from one another by one horrible circumstance or another. At times the plot strains itself to find ways to bring these four people together, given that they're often spread across such a massive battleground. But those moments of plot convenience are forgivable by virtue of how endearing these characters are. Their stories are fleshed out primarily from collectible diary entries, but they also communicate a great deal wordlessly. Apart from a few bouts of narration and some language-specific grunting, there is little dialogue in Valiant Hearts. Instead, the game's visuals are tasked with doing the heavy lifting here. Every moment of pain, sacrifice, and (occasionally) joy is communicated using the game's comic book-inspired artwork, and it works surprisingly well.

It's not just that Valiant Hearts is a beautiful looking game (it is), but rather that its art is used so effectively to communicate to the player. It's in each character's facial expressions, and the small environmental details, that the game's emotional resonance lives. Valiant Hearts is expressive in a way that big studio games often aren't, relying on a subtlety of delivery that implies a trust in its players to empathize with its heroes, despite spelling out only the most basic details about each of them. It never yells to the player about what they're supposed to be feeling; it never shouts about much of anything, actually. There are certainly big, sweeping moments of action within the game, but they're dwarfed in number by the scenes focused on individual characters and the horrors continually befalling them.

It's worth noting that Valiant Hearts isn't looking to be an especially "realistic" portrayal of World War I. The game pulls no punches when portraying the grotesqueries of the battlefield--moments where you'll find yourself running through hails of machine gun fire, climbing over the bodies of your fallen comrades, are frequent--but the overall tone of the game is a bit lighter than its subject matter lets on. Take, for instance, the near-total lack of combat in the game. In the rare instance that you do have to fight an enemy soldier, you're never handed a gun and asked to shoot anybody (outside of a lone tank sequence where you blast away enemy artillery and swooping fighter planes). Instead, Emile just conks enemies on the head with a wooden spoon, a nod to his role as a military cook during one period of the war, while other characters never attack at all. Another example is a pair of quickly paced chase sequences. Here you take control of a sputtering cab that mostly propels itself, while you simply dodge and weave between enemy fire and other obstacles while classical music accompanies the rhythms of the action. It's goofy stuff that would, on paper at least, seem wildly out of place in a game so seemingly dour in tone, but somehow Valiant Hearts pulls it off without coming across as jarring or distracting.

The only time Valiant Hearts really lost me was when it opted to drum up some artificial conflict. So much of the game is about the kind of faceless evil that makes up war, the constant charging into certain death against an enemy you know almost nothing about. That changes after a point, when an evil Baron from the German side starts appearing just to put a face to what you're fighting against. He's a pointless character, a twirling mustache there to sneer and drop bombs on you when the gameplay demands a more specific threat, and it's the only part of the game that feels out of place. How the game chooses to pay off the Baron's plotline is ultimately of little consequence to the bigger, more interesting stories at play, which makes his inclusion seem all the weirder.

Valiant Hearts also lost my attention during a few particular gameplay sequences. All of Valiant Hearts' campaign consists of lightweight puzzle solving, peppered with the aforementioned minor combat bits and even some light rhythm gaming. In each stage, you are presented with some maze of problems to solve--an injured civilian is trapped behind a pile of debris you must navigate your way to, a prison camp can only be escaped after you perform tasks for various people, a detonator must be found and recovered before you can blow up a German fortress, and the like. These simple navigation puzzles are rarely of the sort that will stump any experienced player, but there's mostly just enough challenge there to keep you from feeling like you're just mindlessly doing chores before getting to the next story beat. Mostly. A few stages are outright dull, while others seem like neat ideas that never feel fully fleshed out--the minigame that accompanies Anna's patching up of injured folk is particularly pointless. Even when the puzzles are better, Valiant Hearts is never particularly thrilling. Given its more contemplative tone, that's not surprising, but it does highlight the challenge of trying to turn something so decidedly graphic novel-like into a game. While Valiant Hearts has numerous poignant moments, few of those are during the most interactive portions of the game.

Fortunately, one of those few great interactive moments closes out Valiant Hearts, demonstrating definitively that there was value in turning this story into a game after all. It's a simple thing, something you won't even realize until the consequences are staring you right in the face, and it serves as a perfectly heartrending conclusion to a sad, but beautiful little story. Sometimes the most important thing a game can do is just stick the landing, and Valiant Hearts does exactly that.

Valiant Hearts isn't going to challenge many players' abilities, but it may challenge any preconceived notions about how video games are meant to tackle subjects like war. There are certainly faults to be found with its underlying game design, but in a game that cares this much for its own characters--arguably as much as it cares about the history of the war itself, which is quite a lot--I found it difficult to get hung up on the occasional uninteresting fetch quest or rhythmic minigame. Its rewards are far more emotional in nature, the kind you find in any good story, regardless of medium. Seek this one out, and see it through to its conclusion. It's worth it. 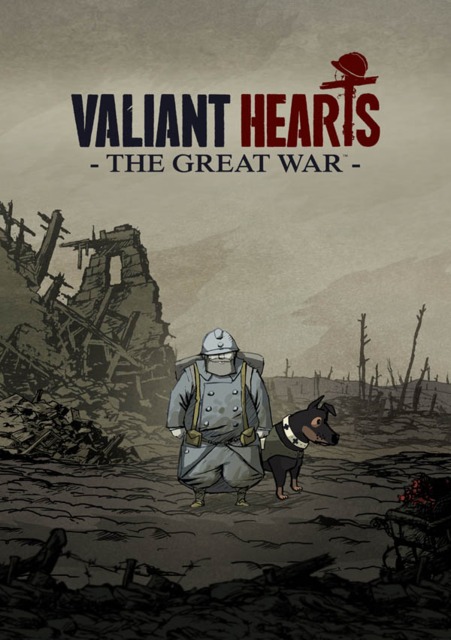