by Brad Shoemaker on February 17, 2012
Share:TwitterFacebookReddit

Warp offers an endearing premise and unique puzzle-solving, but it's held back by some basic mechanical issues.

The new downloadable stealth-action puzzler Warp starts with a great premise: You're a goofy little orange Martian whatsit trapped in an undersea research center, and your only hope of getting out is to teleport yourself through every obstacle that gets in your way. Considering everything about this facility's security system is built around preventing you from warping, that's not as easy as it sounds. Your ability to possess, displace, and disintegrate a wide range of objects and human beings gives the designers ample opportunity--which they mostly use wisely--to set up unique and mindbending puzzle scenarios, but clunky controls and some basic game flow issues undermine what's otherwise a pretty neat little game.

At the outset, you can only warp yourself forward into space and inside specific objects, mainly people and various kinds of barrels. But over the course of the game you'll pick up other new powers, like projecting a spectral version of yourself through walls, swapping places with distant objects, and flinging whatever thing you're inside forcefully in a specific direction. There's also a diverse set of upgrades you can buy that give you advanced versions of those basic abilities. The upgrades give you some interesting new tactical possibilities when stealthily dealing with the patrolling guards--at which times Warp, with its overhead perspective, feels a bit like the first Metal Gear Solid--but they aren't required for the puzzle-solving. Many of those puzzles incorporate all the tools of the alien-research trade--laser barricades, conveyor belts, exploding barrels, and switches placed inconveniently on the other side of large gaps--to make you stop and think hard about how to use all the mechanics at your disposal to move on.

Everything about Warp looks great on paper, but in practice I consistently found the act of playing it to be pretty frustrating. You can't move very fast by default, and there's a lag after every warp before you can move or warp again. It's understandable that your ability to warp is limited for balancing reasons, but by contrast, just about everything in the environment kills you instantly. Things like laser beams and explosions are one-hit kills, and if a guard spots you while you're out in the open, you're dead, period (and they'll sometimes shoot you from offscreen). The sluggish feel of your own movement and the ubiquitous lethality of the environment aren't a good mix, leading to a lot of deaths early on that you feel like you can't really avoid. If the game had load-free instant respawns a la Super Meat Boy, this really wouldn't be a problem. Instead you see a load screen every time you die, then you're returned to the last checkpoint you ran past in the game world, leaving you to repeat everything you did since you were there the last time. To be fair, the checkpoints are distributed liberally, but I was still discouraged from poking around in the environment much, since the constant risk of an unexpected death meant the tedium of reloading and playing back up to that part again.

Given all this, it's freeing to purchase the upgrades that increase your movement and warp speed, and the game gets a good bit more satisfying and pleasant once you do, but that fact makes you wonder if those should have just been the default speeds to begin with. I recommend saving all your grubs (the game's upgrade currency) for those two bonuses before you go for any other abilities. There are some other clumsy aspects to the gameplay that don't improve with upgrades, though. The aiming control for flinging objects and delicately warping around in tight spots feels squirrely and imprecise at times; it's downright maddening when you're trying to warp through a grid of laser beams and end up frying yourself because the margin for error seems to be only a few pixels in size. I also ran into a couple of instances of object physics going awry and keeping me from solving puzzles properly. And while the rest of the game feels pretty well put-together, the last 30 minutes doubles down on all of the game's problems and makes for a pretty miserable final sequence. The ambitions of the game's core gameplay are good ones, so it's a shame that it falters a bit on the execution.

Warp isn't just a linear series of discrete puzzle rooms like, say, Portal. Instead the undersea base is set up as a group of sprawling, interconnected facilities joined together by elevators, not at all unlike Shadow Complex or your favorite Metroidvania. And like those games, there are some areas you can't reach until later in the game when you've gotten the right powers. There are 66 upgrade-powering grubs scattered around the base, and there's also a smaller number of film canisters that are just there to be collectibles. You can get cheap upgrades to reveal the grubs and canisters on the map (and there are achievements attached to getting them all), so completionists will naturally be tempted to roam around and pick up all the items they missed. But I found the game to discourage backtracking, exploring, or really breaking from the critical path in any way. The maps of the different facilities don't line up when you flip between them, and the elevator icons don't indicate where you'll end up if you hop on them, so you don't have a good way of figuring out how to get where you want to go on different levels of the base.

More damningly, some of the puzzles depend on items being in specific places, but when I decided to head back and explore the map later in the game and then tried to return to my objective, I found the state of the rooms I'd already completed hadn't been reset, meaning I initially had no way to get through them again. In those two specific cases I eventually figured out a way to skirt the edges of the game mechanics and return things to an arrangement where I could progress, but it just feels sloppy that you would run into cases like this in a game that ostensibly wants you to go back and forth at random times. There's only one kind of puzzle--where you have to swap places with objects on the other side of barriers--that I had this issue with, so it's entirely possible that if you were to head back and explore at other points in the game, you'd have no such problems. But that doesn't make it any less annoying if you do run into this sort of thing. Lastly, the game is practically begging for a new-game-plus sort of option, letting you go through again with all your upgrades and getting the items you missed. But there is none, with is all the more unfortunate given the existing issues with moving around in the game world.

Despite its mechanical foibles, Warp has a lot of charm in its visual design, animations, and infrequent dialogue, and if you can tolerate some frustration, there's a good quantity of unique puzzle-solving to be had. With a lengthy main mode and a few external challenge levels, it's also a decent value at $10. The game is rougher around the edges than its excellent core premise deserves, but it's still a promising first effort from Trapdoor. 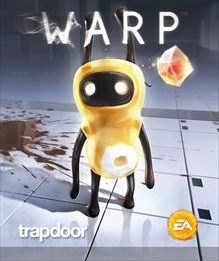