by Jeff Gerstmann on February 16, 2012
Share:TwitterFacebookReddit

The pieces of a tremendous Wipeout game are present in 2048, but it's hard to look past the game's annoying interface, wicked-long load screens, and underwhelming sense of speed.

Wipeout 2048 brings the popular and long-running future-racing franchise to Sony's new PlayStation Vita. The action and the basic modes are mostly intact and it offers a passable number of options for the price. But it can be hard to look past the game's technical issues, which include insane pre-race load times and a frame rate that tends to rob the traditionally breakneck hover racer of its sense of speed. Toss in a UI that's a little too slick for its own good and you end up with something a little more ho-hum than you might be expecting.

As the name might tell you, the game opens in 2048. But in case you haven't internalized the Wipeout timeline by this point, it'd help for you to know that this is the earliest entry in the series, fictionally speaking. It covers 2048 to 2050, but the first Wipeout game is set in 2052. The upshot of all this is that the game's tracks are designed to look a little more like sectioned-off parts of a future city instead of race tracks built specifically for anti-gravity racing. It's sort of a minor distinction that mostly boils down to "you will see buildings and other city-like structures along the sides of the game's 10 tracks." But this at least gives the game a centralized focus and jumping-off point, aesthetically. The team list looks a lot like Wipeout XL's, so you'll unlock and control vehicles from Feisar, AG Systems, Qirex, Auricom, and Pirhana. Each team has four different ship types that unlock as you earn experience points in events, giving you access to ships balanced in favor of speed, handling, or combat. The fourth ship for each team is a "prototype" ship that has unique features. The Feisar prototype, unlockable once you reach level 10, increases its top speed every time you fly over a boost pad, potentially giving it the fastest top speed around if you can keep it from crashing into too many walls. I ended up sticking with the Feisar Speed for most of the game, but in the combat mode you'll probably need something a little tougher.

The game's primary mode is a single-player campaign that gives you a grid of events. It looks like a shinier version of the Ridge Racer 6 grid, and it doesn't give you enough information. All the grid shows is the type of event. So you'll know if the next thing is a race, a combat event, and so on. But you won't see which track it's on or what your goal on the track is until you tap into the event. This isn't a huge deal on its own, but the game doesn't have a custom race (what Wipeout HD called "racebox") mode to let you build your own events. Want to practice a track? Unless you've opened up the hot lap events that have you racing alone on a track against your ghost, you'll need to clumsily fumble around the campaign menu until you find the right track. The races you need to beat to unlock the prototype vehicles are "hidden" on the map, forcing you to scroll around the grid in search of discolored areas that pop out when you rub the rear touch panel.

The actual racing isn't dramatically different from Wipeout's past. By default, the game uses a friendlier control scheme that gives you one air brake button that works in both directions, rather than giving you separate air brakes on the triggers. You can swap that default scheme out for the more traditional Wipeout controls or opt for one that uses the Vita's tilt control. You can side shift and bust out barrel rolls and, if you're feeling crazy, you can tap up on the right stick to spin around and drive in the opposite direction. This little move comes in handy when playing combat events online, since players seem to like to just drive up and down the same small stretch of track, grabbing weapons and blasting each other quickly. It feels like they're probably grinding out XP in an attempt to climb the game's long ladder and unlock all the optional events and ships.

When you're playing alone, the racer AI feels a little rubber-banded to keep things close, but the game's default goals don't start out too difficult. Some of the early races require you to finish sixth out of eight racers. That's... not so hard. But as you go deeper into the campaign, the minimum goal gets tougher and the races get faster. Finishing third in the 2050 races can get pretty tricky. In the event that you can't scrape by, the game will ask you if you want to skip an objective after a few failures. This usually happened in race events. Stuff like the combat mode and the great-looking zone mode aren't especially difficult, even at higher levels. You'll also find some optional events, and these usually lead you to trophies, provided you can get the top goal in an event, which usually requires you to finish first or double the normal goal. The eventual task in the campaign is to get an "Elite Pass" on every event, which won't be easy.

Online, the game gives you a campaign and a different grid to light up, but here you're fed objectives that apply to any event on any track, rather than forcing players into different player matching buckets. The objectives are fairly simple, usually just asking you to "finish the event" at the lower levels. Between races, the players (up to 8) in your game vote between two different track/event combos. Combat seemed to get the most votes during my time online, but again, I suspect that's because players were attempting to grind out levels. Or, at least, I hope that was the case, because it's hard to imagine those other people having any lasting fun by playing the same short, boring combat events over and over again. At least the whole thing has great music, with a soundtrack featuring The Prodigy, The Chemical Brothers, Deadmau5, Noisia, Underworld, and more.

If the 2048-specific multiplayer isn't your speed, perhaps the cross-play will be. This lets you get at a few tracks and crafts from Wipeout HD and play with PlayStation 3 players. Unlike the easy player-matching of the 2048 online campaign, though, playing in the cross-play portion of the game requires you to choose a class and track up-front, before the search even begins. It's a pretty neat idea that'd be cool to see make its way into more games. It's also worth noting that, as of this writing, all of the online servers that power the leaderboards and player matching across all modes appear to be down. The game was working fine prior to the US "early" launch and I was able to get in with players from other regions and play a bunch of multiplayer, so hopefully this will all be fixed and behind us shortly.

The things you want from a Wipeout game are here, but they're surrounded by a bunch of caveats. The UI to get into a race, as mentioned, is pretty poor and needs more options. The load times, even though a patch was put out to shorten them, are ridiculously lengthy. And once you're in-game, you'll find that, even under the best of circumstances, the game just doesn't feel fast enough. The frame rate is usually pretty stable, but it's stable at a lower rate that makes all the action look choppy and feel sluggish. Add in a bunch of other racers and have them all firing weapons and you'll find that even this less-than-ideal frame rate takes a noticeable hit. With these problems, the whole thing is effectively neutered. The assets are often wonderful, but the execution is decidedly lacking. 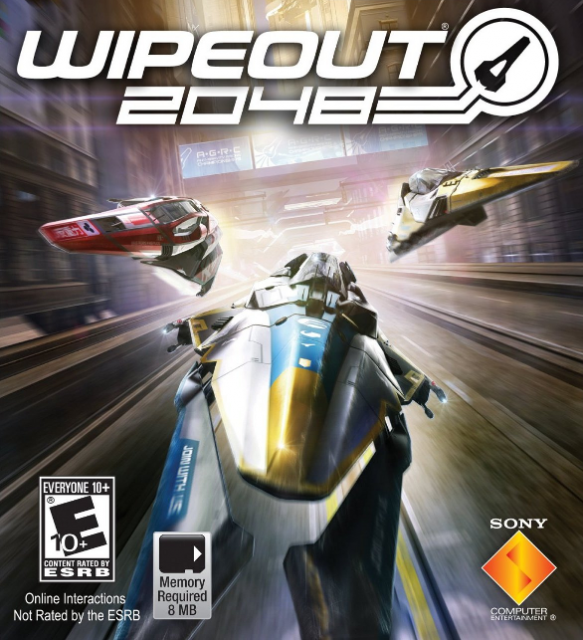