This is kind of both a let down, and so fucking awesome to me... There has always been an itch that could be scratched for a while now... I've always been the type of person that knows a lot about a lot of things, like obscure actors and the movies they have been in and can recite multiple lines from most of the movies on the drop of a hat. Its that type of basic "nostalgia", for a lack of a better term, just get sucked into my brain, and I havent been able to find that type of medium. The game has beautifully rendered 2D sprites going all out in this classic brawler beat-em-up. You fight all types of people like, demon hipster chicks, regular hipsters, robots, fat oichi, twins, emo kids, and even the negative representation of a player. And on top of that, there are the bosses thrown in at the end of each level, which are tied to which ex you are facing.

With the fact that this is using an out of date style of gameplay, ala River City Ransom, much like the graphic novels, the references dont stop there. There is a secret shop underneath a bridge, which sells awfully familiar items for upgrades like the Bionic Arm, subspace highways, beaming up animation, bursting animation, and other awesome classic video game actions. The obscurity and utmost frankness of the references make me giddy, but it doesnt help the difficulty of the game. It is designed as a multiplayer game, so that the enemies could be picked off by each player, but the single player is nothing but an onslaught of enemies, slow moving combat, and at times, frustrating storyline. You are just supposed to pick one of the for players, a color of their costume, and then GO! They just drop you off into the middle of it, and expect you to be the very best that no one has ever was, but it doesnt help. With that aside, the game is great, including an original soundtrack done by the almighty Anamanaguchi helping the great 8-bit feel of yesteryear seep into your soul. This picture above is exactly how I feel about this game. It made me excited to kick some ass, apathetic like no other, ready to rock, and that it was going to be awesome while being take down. There are shortcuts here and there, but during the game they are hard to do, until a second or third playthrough. Its a solid 4Launchpad McQuacks out of 5. 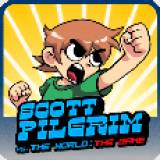