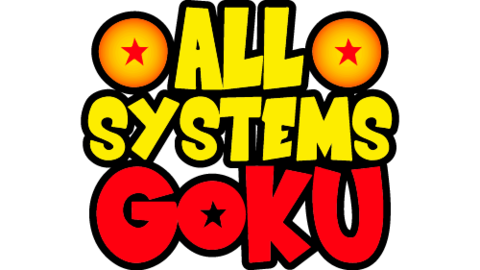 Dan and Jeff hit the Snake Way and chase some monkeys as they discuss episodes 04-06 of Dragon Ball Z Kai.

Anime experts Dan Ryckert and Jeff Gerstmann embark on a quest to watch every episode of Dragon Ball Z Kai.

edit: my bad, one episode too early...

...the intro music sounds a hell of a lot like the theme to Banjo Kazooie Nuts n Bolts.

Regarding Snake Way: Yes, they cut out 10 episodes of filler, including hell.

Krillin is weak compared to the alien ape-humans but he's still the strongest human.

Picollo and God(Kami) were originally the same being. Kami shed his dark side which became Picollo and Goku defeated that old Picollo in Dragon Ball. As he was dying he laid an egg which became current Picollo.

When either one of the green guys dies, the other also dies since they're the same person.

Always assume clothes are weighted, they like their heavy clothes.

And everyone of the fighters is bulletproof

The episode title spoiler is a shared experience for us all

Why is this so great its just too awesome

Hurry up please, it's time.

lmao at Dan over thinking the whole dinosaurs thing. They are just there. Isn't the leader of the world a talking dog too?

The show kinda tells you that six months pass between Goku starting his run and reaching king Kai, and it coincides with hyper confident Gohan. It's heavily abridged in Kai but it kinda makes sense.

Kai cuts out about 10 1/2 episodes of content from Z from the Snake way/Gohan training parts that was just straight up filler which includes Goku falling down into Hell.

Even as a big fan of Z that segment was a real drag so I was fine to see it go.

There are anthropomorphic animals living on Dragon Ball's version of Earth, so dinosaurs are not that crazy considering.

I unironically think this is one of the greatest features

Put this on Google Play Music, please. I know I'm probably the only idiot on earth who uses that for podcasts, but there we are.

Piccolo’s plan with Gohan was to A) defend Earth as it’s his to rule(enemy of my enemy sitch) &amp;amp; B) He wants to corrupt Gohan and make him in his image and basically steal his enemy’s powerful son as his heir.(It’s magna canon)

im gonna go with its a jurassic park situation and maybe capsule corp brought back dinosaurs and is responsible for the all seemingly future tech stuff like hover cars, (fullsize planes inside of a capsule(not there yet)) because idk bulmas dads a genius.

Dragonball is set on a fantasy version of earth. It is anachronistic, with future tech like flying cars and super capsules but people also use swords a lot. Animals can talk sometimes, there's mythical creatures that just kinda hang out, and there are dinosaurs around. That's just how the world is. The Dragon Quest games (also by Toriyama) are very similar but just not set in the future-present.

People in the series assumed King Piccolo was a demon rather than an alien for a long time. Piccolo (Jr) was born from king piccolo, on earth. He's technically an alien, sure, but he is from earth and he lives there.

Gokus extra clothese weigh around 100 kg, which is around 220 pounds.

On King Kai's planet that would mean that he's walking around with around a metric ton in clothing.

They are right about there being a lot of stuff that was cut out in these episodes.

Episodes 3-6 of Kai make up episodes 6-19 of original DBZ. They cut out Krillin trying to find the dragon balls, Krillin and Bulma going to go find Tien and Yamcha, 3 Episodes worth of just Gohan alone in the woods getting into adventures and meeting people, Goku falling off Snake Way into hell and fighting his way out, Goku stopping at a castle along the way at Snake Way with ladies who want to keep him prisoner, the sayians stopping at some other planet on their way to earth and doing evil shit there, and all of Krillin, Tien and Yamcha's training at the lookout....

I hate being that guy but since it has been brought up both episodes Goku was sent as a baby to Earth to wipe out all the humans.

Describing Kami as Raiden is actually quite on point.

I hate being that guy but since it has been brought up both episodes Goku was sent as a baby to Earth to wipe out all the humans.

Akira Toriyama just liked drawing wacky fantasy and sci-fi stuff. There's no rhyme or reason to the combination of dinosaurs, future tech, and aliens and you're not supposed to worry about it. It's just set dressing! Toriyama's version of earth has hover cars and dinos. Just enjoy it!

bumping up the number of episodes is a great idea.

Great Episode, glad they bumped it up to 5 episodes a shot. Does anyone know 100% what the canon is regarding Goku going to earth? I have always assumed that the Raditz side was the truth, and the Bardock movie was essentially just some flavor text, but I don't know if maybe something was officially changed in the manga later or something like that.

Really happy they decided to up the amount of episodes per podcast. This is fantastic. I hope people don't spoil anything for them, or even give them any info unless they are specifically asking for it. I think it's fine to let them speculate, and be wrong/correct about stuff.

I don't think Kai cuts out anything "important" (it only focused on trimming filler content that wasn't present in the comic) - any time you feel like you're missing context or the importance of a thing/person it's probably something from the original Dragon Ball story (pre-Z).

Also yeah the Elmer Fudd comparison is crucial, Dan. Dragon Ball is SUPER cartoony in the classic sense. There's lots of goofy sight gags played for comedy and nothing else. Welcome to anime, have fun.

@liad: I agree except I do think they should at least bring in someone once to set them straight on original Dragon Ball unless they plan on watching it themselves after this

@primworm: I'm pretty sure they say at some point that Goku must have forgotten his mission of taking over Earth because he hit his head.

These were all characters who were introduced in Dragon Ball, mostly as rivals to Goku.

Yamcha was introduced first as a desert bandit who was out to get the dragonballs first to wish to get over his fear of girls. He no longer needed to after he got used to being around Bulma, who became his girlfriend.

Krillin was introduced next as Master Roshi's (aka the Turtle Hermit and Muten Roshi) other pupil, and friendly rival to Goku. He and Goku became fast friends through their training under Master Roshi, but as Goku grew older and stronger, Krillin fell to the number 2 position. He never let it bother him too much and kept his training up.

Tien (Tenshinhan) was introduced as the student of Master Shen (the Crane Hermit) who is the rival of Master Roshi, and who trains his pupils to become assassins like his brother Tao Pai Pai (who was killed by Goku during the Red Ribbon Army arc). Though Tien fought both Master Roshi and Goku during the 22nd Tenkaichi tournament claiming that he wanted to become an assassin, he grew disillusioned with the Crane Hermit's style and learned that he valued honour as a martial artist over revenge.

Yajirobe was introduced as a random samurai in the wilderness who picked Goku up after Krillin was killed by Demon King Piccolo. He doesn't like to train or anything but he's pretty strong. He hangs out with Karin (Korin) at Karin Tower since he grows senzu beans there. Karin Tower is directly beneath Kami's Lookout.

The Earth presented in Dragon Ball/Z/Kai is a fantasy land. There is only one world government and one King (a dog), dinosaurs are around for some reason, humans include all kinds of half-animal hybrids, and there are gods and demons aplenty (Kami and Piccolo being the God/Devil counterparts early on, then there's King Yama, King Kai, etc).

@sogeman: Yeah, I know that much, I'm more talking about the story from the Bardock movie vs the original anime, Dan and Jeff both are unsure of what the truth is and Jeff acknowledged that it may be a retcon type of thing with the canon

Piccolo is a Dreamer. Earth is the only home he's ever known, and he doesn't want the Saiyan ICE to deport him (by destroying the planet).

@primworm: Raditz' side was the truth as that's how saiyans operated.

There is one odd retcon that complicates things re: Bardock though. In the movie which that first scene is from, Bardock is "cursed" with the power to see the future by an alien that he just killed. This causes him to see the destruction of Planet Vegeta, which is what leads him to leading the rebellion against Frieza to try and stop that from happening. Before this happens, knowing that the planet will be blown up if he fails, Bardock makes sure that Goku gets sent off-world in time.

So, both are true. Raditz's side is true in that that was his original mission (kill all humans so the planet could then be sold off), but the timing of it (getting sent off right before the planet gets blown up) is a result of Bardock knowing the planet was going to get destroyed and wanting to make sure that Kakarot survived (the "Planet Krypton" approach).

@sevith: Gotcha, that helps me wrap my head around it, I haven't seen the Bardock movie in forever and I know most of the movies aren't canon, but I believe a handful of them slot in the series with mostly no problems.

The context they're missing (like who returning characters like Yamcha, Tien are etc.) is generally from not watching the first Dragonball series, not from DB Kai cutting a bunch of filler. The filler Kai cuts is all totally non essential fluff, although I now realize some of it inadvertently might have helped explain the setting a bit if you hadn't seen Dragonball.

The whole 'they were aliens' is also only introduced in DBZ (and clearly something retconned in to give the story a bigger scope), in regular Dragonball they're all just earthlings (although maybe weird ones)

So Piccilo's motivation so far is just not getting destroyed by a stronger third party showing up.

That said most of that should all become clear anyway in the upcoming couple of sets of episodes.

I'm pretty sure Jeff and Dan know this but Kai doesn't cut anything that was in the original manga, just 99% of the fillers and padding that DBZ added. In fact, I wish Kai cut all the fillers because anime fillers are just pure garbage so you aren't missing anything.

Dragon Ball Fighterz was also the reason, along with this podcast, why I started to watch Dragon Ball Kai. I've really enjoyed my time with both the series and this podcast. Both have been pleasant surprises!

Oh man, those predictions at the end.

The next five episodes are going to be a ride for Dan and Jeff. Given their expectations I think they will really enjoy them.