Uninspired, competent and faintly disturbing. Tomb Raider does nothing new but plenty well.

Something occurred to me during my time with Tomb Raider. As I repeatedly saw the numerous hard surfaces of Tomb Raider play hot potato with the new, young Lara Croft, it was like the team at Crystal Dynamics was trying to show me how serious they were about making a Tomb Raider game that wasn’t a pastiche of Indiana Jones and softcore pornography. The new Tomb Raider is nothing if not a very serious game. It wants you to believe Lara’s transition from a naïve young archeologist to assertive and resilient young archeologist. Though Crystal Dynamics don’t really succeed in making this arc believable, they execute well on the nuts and bolts of making a good action game. Tomb Raider does a hell of a lot of things right and people who aren’t completely burnt out on this brand of set-piece driven, combat heavy experience will likely have a grand old time.

First and foremost, Tomb Raider draws both favourable and unfavourable comparisons to the Uncharted series. The mix of platforming, third-person shooting and light stealth is unmistakably similar and for the first hour of the game you’d be forgiven for thinking Crystal Dynamics had copied the Naughty Dog formula wholesale. The biggest similarity to the Uncharted games is in the game’s numerous and bombastic set-pieces. A decent portion of Lara’s latest adventure involves you pushing up on the left stick while things explode around you, pulling down on the left stick when the game wants to show you the explosions Lara is running away from and making the occasional death-defying leap, often away from an explosion. If I sound like I’m repeating myself here it’s because Tomb Raider can’t figure out how to add tension to an action set-piece without making things explode. Though still entertaining in their own right Tomb Raider’s set-pieces lacks the poise and elegance of Nathan Drake’s starring vehicles. Tomb Raider also embellishes its set-pieces with an obnoxious number of quick-time events and like most QTEs they do more to disconnect you from the action because you’re too busy waggling the left-stick than engage you in it.

Dig deeper however, and you see where Tomb Raider differs from and expands upon its obvious inspiration. Although its story objectives are often strictly linear, Tomb Raider uses a hub structure connected by multiple campfires where you can upgrade Lara’s gear, choose new skills and fast travel to different areas you’ve discovered. Not only do these areas provide the island setting a sense of place, they also act as way for you to seek out and discover optional tombs and other goodies. Though the scant few puzzles in the game are either extremely simple or downright tedious the tombs offer rewards in the form of salvage (the in-game currency) and experience points, making them worth your time. What’s more, your traversal through these levels as Lara feels organic and natural; ensuring that journey to the next objective is never dull or tedious. There’s also a healthy dose of Metroid-style progression thrown in for good measure, as new abilities for the prominently-featured bow acquired on missions will open up areas previously inaccessible, giving you ample reason to return to them. It helps that these areas look gorgeous too, with great texture quality and environmental design that shines on a mid-to-high end PC.

Combat, one of the series' weaker points in previous games, is arguably the highlight of the reboot. The combat scenarios Tomb Raider puts you in and the level design around them is top-notch. Tomb Raider frequently forces you to deal with threat from close and long range, avoid explosives and fire arrows and stay in cover simultaneously and it’s when the game throws everything at you at once that the combat really comes alive. It’s also fun to kill people in Tomb Raider; the mechanics strike a superb balance between responsiveness and mobility, allowing you to scramble from cover to cover without being locked to a chest-high wall while taking accurate shots at your enemies. Unlike the last Uncharted, the encounters are well-paced to point where they’re rarely overbearing. I was always looking forward to the next encounter, purely because the interplay of the shooting mechanics, enemy AI and level design was so well-done.

Tomb Raider’s story and character development is probably its worst element. For all the broo-hah-hah about transforming Lara Croft into a strong assertive lead, Crystal Dynamics do a poor job of selling it. The survival aspect of her character is toyed with in the early hours when the game asks you to hunt animals for food and scrounge for salvage, but none of these mechanics go anywhere. Not every game with the tagline “A Survivor is Born” needs to be Metal Gear Solid 3, but beyond Lara’s ability to bounce off almost everything without shattering her spine the new survivalist angle to her character is quite underdeveloped.

Much of the drama is instead centered on Lara learning to become a predator, but as this has to be a playable videogame Lara is as adept at killing when she first picks up a gun as she is when she’s mowing down the island’s inhabitants in droves. Of course, concessions have to be made in the name of playability, but the storytelling does little to make up for this fact. Lara doesn’t really change that much over the course of the game. Spec Ops: The Line had a remarkable system whereby the character’s in-game dialogue changed over the course of the game to reflect their mental state. Tomb Raider could have used more of this. There are a few moments where Lara expresses her aggressive intent, but for a girl who quickly learns how to execute injured enemies by burying a climbing axe in their skull; you’d expect her newfound aptitude for murder to be reflected more in her character. The line: “It’s surprising how easy it was” just doesn’t cut it. In the end, the character arc feels unearned despite Crystal Dynamic’s best efforts to convince you otherwise.

As far as plot goes, Tomb Raider is fairly typical for a story centered on a boat crashing on long-forgotten island. A ritualistic cult, some faint suggestions of mysticism and a whole lot of mispronounced Japanese words follow and it’s all fairly predictable. More interesting, and faintly unsettling at the same time, is the game's tone. Tomb Raider has an undeniable penchant for violence, dabbling in horror imagery throughout much of the game. You’ll trudge through a few bone yards, mass graves and pits of rotting body-parts in Tomb Raider and I’m not sure to what end. The combat executions are also pretty extreme. You eventually unlock the ability to do the Tomb Raider equivalent of a curb stomp, except these moves generally involve Lara raking enemy bodies with gunfire at point blank range or stick an arrow through a man’s throat. The game also takes an almost indecent pleasure in roughing up Lara in numerous ways. The early moments of the game involve Lara being stabbed through the kidney with a metal spike and it doesn’t really let up until the back third of the game. The emphasis on raw violence gives the game a grimy, unpleasant tone which on the one hand drives home the severity of the situation, but on the other hand feels like it’s being edgy for the sake of it.

Well I say “worst.” in fact the actual worst part of the game is the tacked-on multiplayer which bears a striking resemblance to that of the Uncharted games. There’s your bog-standard unlock system, the aforementioned competent level design and a bunch of challenges to keep you engaged but there’s nothing here that sets the multiplayer apart from its peers. Regardless, there’s more than enough single-player content to justify your time and money spent.

That being said, Tomb Raider is nothing if not a successful reboot. Its shift away from the laborious puzzling and platforming of the previous games towards the standards set by other action games highlights its lack of real inspiration, but ultimately breathes life into a series on the verge of complete irrelevance. It may not be anything new, but so much of it is executed so well that people in the market for this type of adventure will be amply satiated.

Other reviews for Tomb Raider (PC)

The Will to Survive 0

It’s hard to ignore the deep impression that the Tomb Raider series and its rough-and-tumble protagonist have made on gaming, but it must be admitted that Lara and her adventures seem closely bound to a bygone era of excess crate puzzles and comparatively rudimentary characters and environments. The series carried on long after its original reign during the Playstation One generation, but it’s felt like it’s never quite managed to find its footing as part of the modern action-adventure genre. Th...

A reboot that completely ignores what Tomb Raider represents. 0

Spoilers are PresentTomb Raider has always been about free form puzzles that encourage the player to use their knowledge of the game mechanics and design to solve obstacles with little input. This produced both satisfying and engaging game-play that lead to the huge success of the original games. While the lack of narrative was a weak-point, they tried to rectify this with the next gen releases. Tomb Raider: Underworld being their last attempt before they wiped the slate clean and started over. ... 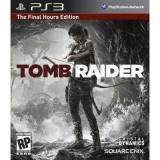