Everyone Has to Make Their First Game

by Patrick Klepek on July 30, 2013
Share:TwitterFacebookReddit

Enrique and Paul Dryere had never made a video game before. In college, they decided to change that. Five years later, they have Ring Runner to show for it.

Five years, two brothers, a marriage, some fights, a successful Kickstarter, and a shipped video game. That’s Ring Runner: Flight of the Sages, a never say die passion project a half-decade in the making.

Ring Runner is an ambitious top-down shooter whose handcrafted feel is apparent from the game's opening moments. When one describes Ring Runner as a game made by amateurs, it’s meant as a compliment. Ring Runner bites off way more than it can chew, and it’s endlessly endearing for it.

When Enrique and Paul Dryere were young, the two became obsessed with an obscure space shooter that was part of AOL Games, Silent Death: Online. An early game from Mythic Entertainment, Silent Death: Online earned itself a cult following before it was shut down in 2001, not long after the game had been transferred to an early Electronic Arts multiplayer service.

“We’d run up a tab of about $1,000 or so on a credit card within a month of playing this game online, and it was pay-by-the-hour,” said the now 31-year old Enrique Dryere. “It’s a game we got in big trouble for, and we were never able to play again. It was actually a lot of fun. It was its own, unique kind of gameplay, so that’s basically what we wanted to do initially.”

(In fact, an upcoming, free expansion for Ring Runner with some MOBA-like qualities will serve as the duo’s ultimate homage to Silent Death: Online).

Enrique and Paul were 26 and 21-years-old, respectively, when the quest to make Ring Runner began, as the two were still attending in college in Texas. The two had never made a game before, and had no particular expertise or affinity towards game development. They are 31 and 26-years-old now. Enrique is married. It’s been a five-year journey, though like many great experiments in video game development, it did not start out that way. The two planned to finish Ring Runner before college was up. Of course, that didn’t happen.

The seeds for Ring Runner were planted much earlier, too. Enrique started writing a novel a few years earlier that would form the basis of the game’s universe. (“I was only writing a little bit, and it sucked. All the stuff I was writing was really bad, and I got to work with some really great professors that made it a passable novel. [laughs]”) It was intended to act merely as a backdrop for the action, but as they began to consider how many probably would not come to Ring Runner with Silent Death: Online on their mind, a singleplayer mode to introduce players to the game’s basic concepts was added. You know, a singleplayer mode. No big deal.

This anything goes attitude was apparent in the five-minute video about Ring Runner that originally caught my eye. The video overviews the many, many gameplay types built into Ring Runner, and as the video goes down the list and I began to read about the game’s development, I could only picture Enrique and Paul as crazy people. Have they ever heard of scoping?

“A lot of this was done when we were in college, and we wanted to do all these things,” said Enrique. “How do you program racing AI? How do you do AI that responds to a ship with spikes in it, and things like this? We set these challenges up for ourselves, and tried to do things that we thought would also produce fun gameplay. Believe it or not, there were a lot of ideas and a lot of things that we did throw out. We did, basically, for the last five years, just tons of different things and trying them out, playing with them, and trying to learn.”

When Paul and Enrique decided it was time to make a game, it was also time to divide the roles of who was building what. Remember, this is long before Unity, GameMaker, and other tools made Intro to Game Development an easier affair for amateurs with big dreams. The two were starting from scratch, but mostly by shrugging, Enrique became the one responsible for the audio and visuals, while Paul handled programming.

“I had a bit more programming experience than my brother when we started,” said Paul. ”But honestly, my programming knowledge at that point was negligible. I think it came down to the fact that I enjoy math and my brother has a distaste for it.”

It’s one thing to say “okay, I’ll do the art,” it’s quite another to, er, actually do start drawing, painting and creating 3D models. The 3D elements came along, but Enrique credits any decent 2D art in Ring Runner to his wife, Courtney Dryere, who kind of joined the project mid-development. With his limited expertise, the two developed a procedural art engine that did much of the heavy lifting. Weirdly, it was writing the music that Enrique found came to him naturally.

“I had never made music before--I hardly even know how to play the piano today--and I was able to produce the whole soundtrack just basically poking at the keyboard,” said Enrique. “With Logic Express, of course. [laughs] I wanted to do that whole 1980s minimalist [thing], just pressing one key and letting that tone ride for a while and changing the key--that’s what I wanted our music to be like but I was able to do a little more with it. That was a good, happy surprise. “

The two toiled away for two-and-a-half years before the end of college approached. Well, scratch that. They managed to extend the “college experience” by another year, but push was coming to shove and the real world was knocking at the door. Paul and Enrique were not happy with the game in its current state, and there were sarcastic conversations about releasing the game without their changes attached. In that case, if they ever hit it big, Ring Runner couldn’t be held against them. Instead, the two turned to Kickstarter.

“We had a couple of options, none of them were giving up,” said Paul. “It came down to either seeking funding via Kickstarter, or releasing a compact version of the game.”

“The moment where we realized ‘okay, worst case scenario, we’ve at least made $20,000 over the past four years or so.’ [laughs],” said Enrique. “It was great to see that we hadn’t wasted our time entirely.”

That was last September. After a brief moment of public validation, the team put their heads down, and worked on coming out on the other side. Prior to release, the three development partners (remember, Enrique's wife joined as a 2D artist) tried to keep everyone’s spirits high. If all that was happening for dinner was eating cheap hot dogs, it was a hot dog party. The long slog towards release was taking its toll on Paul.

“As kids, it was pretty much just me and him alone in the house a lot of the times. So we already knew each other pretty well, about as well as two people could know each other."

“The development of the game has been the center of my life for the last five years,” he said. “The combination of hope and uncertainty can make it hard to concentrate on the work ahead of me.”

By this point, you’d think the brothers would be itching to get away from one another. I love my brother, too, but the idea of spending four years with him, side-by-side, is daunting.

And while Paul confirmed the fights, it came with the same set of caveats.

“The truth is, it was great,” he said. “We managed to divide the work in such a way we didn't have to step on each other's toes too often. Of course, it helped that we have very similar taste in games and therefore game design. That's not to say we didn't have arguments, but the game is better for them.”

On July 19, Ring Runner went on sale on Amazon, Gamersgate, Desure, and other digital distribution systems. If that date is causing your wallet to slowly creep away from your desk, that’s because July 19 fell in the middle of Steam’s mammoth summer sale. (The timing was not up to them--distributors picked a slot). All sorts of games, from the smallest independent creations to the biggest blockbusters, have deep discounts and dominate the conversation for weeks. In fact, Paul’s email to me came with this tragic graphic attached.

“Obviously, we’ve worked a long, long time on this, and we want it to succeed, but we’re also very realistic about the chances and how much money it can make,” said Enrique. “I wouldn’t say we’re disappointed in any way, but we weren’t expecting anything huge, so we weren’t very disappointed, even when the Steam sale came and sort of crushed us. [laughs] I’m amazed that people buy the game! I don’t want to undersell my own game, but there are packages, bundles out there of like nine great space games for for $4.49, and, right now, for the initial launch has been selling at $10 and now it’s $14.99. I just wonder, what’s causing people to buy this game when there’s this other thing here that’s 10 games that are $4.49? It’s tough. I don’t know how business works, to be honest. [laughs]”

Ring Runner hasn’t been a big hit. It’s not the next Braid or Super Meat Boy, but it’s made enough money to give the team time to play around, and consider developing a new game. It's not a done deal, but that's the plan right now. Paul and Enrique’s plans are to focus on smaller feature sets, and release more games.

Possibly the biggest shock has been playing with new, polished development tools like Unity, and discovering how it would have made Ring Runner’s development easier.

“To give you an idea, I created a little Ring Runner mock-up in Unity in two days,” said Paul. “Obviously, not the whole game, not even close, but...I think we could remake Ring Runner in Unity probably in half-a-year-to-a-year. We would cut some things out, but I think we could do it. [laughs]”

On to the next one. 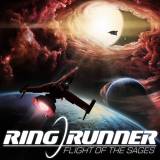 Ring Runner: Flight of the Sages

An overhead space shooter/rpg by Triple B Titles with customizable ships, a deep story, and PBC's. (Peanut Butter Cups, of course!)