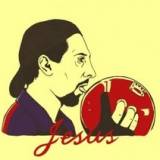 I was going to post this in one of the forum threads but it got locked. Figured I'd just post it here on the blog. It's not really related to anything other than the sheer genius that is Bret and Jemaine. And I think it's cool we can embed youtube videos here. Long live the Conchords.

As a further introduction to all you fine people, and because people like pictures, I figured I'd post some shots of the two rooms in my house that games get played in.

In the "family room", my girlfriend and I have the Wii, PS2, and occasionally a SNES and Generation NEX hooked up to a 32in flat screen CRT beast. That sucker weighs about 150 lbs. but has great picture quality for an old SD TV. Also seen in this picture is my old, ghetto 40GB Tivo and some wireless SNES and NES controllers made by Messiah Entertainment. Oh yeah, and the gimmicky RE4 chainsaw controller that got about 10 minutes of use (I got it for free).

The living room, where I spend a majority of my gaming hours, has a bit better TV. It's a 50" rear projection LCD from Sony. The 360 with paperweight HD-DVD player and PS3 live in the cabinet below. Various DVDs and games line the bookshelves. Just for kicks, I'll also include a shot of the couches with Rock Band peripherals hiding under blankets in the corner.

That's about it. If I ever end up meeting up with any of you on XBL, you are now all too familiar with the view form my couch.

When I first got GTA IV back in April, it sucked me in. It was immersive, addicting, and as a lover of movies like Goodfellas and Heat, it was right up my alley. The more I played, the more I thought about trying to go for 100% completion (despite not having gotten past 50% in any prior GTA game). After finishing the campaign, completing many activities with friends (some of them kind of tedious), doing all 50 stunt jumps, completing races, finding all the random characters, etc..., I think I'm comfortable sitting at only 92% complete. It sure would be nice to see that extra 8% show up on the in game stats screen, but I don't think it's worth tracking down all those damn pigeons or taking Dwayne bowling enough times to get him to 90%. I think I also have one or two random character missions left as well. After 60ish hours of game time, I think I might have to call it quits and move on to any one of the many spectacular games that came out last fall that I have yet to play. It was great while it lasted, but GTA IV, I'm done with you (at least until the DLC hits). The flying rats can live.

A little noisy, a little slow, a little chaotic, but filled with promise. Luchadeer has a lot of work ahead of him.

So I was a member of "that other site" for a few years. I mainly used it to get gaming info and listen to/watch the wonderful podcasts and video content. I never posted much or wrote any blogs there. Since all the best personalities have migrated here, I'm going to use this opportunity to get in on the ground floor as it were and hope to become an active member of a great community.  Or I at least hope to find some cool people to play games online with so that I don't have to deal with the matchmaking roulette wheel of Xbox Live as much.

If you somehow found your way to this page, "hello and thanks for stopping by".