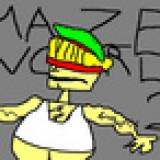 spoiler warning the only interesting thing about this movie is the footage of the angkor wat at the end. my advice to anyone who pretends to like this movie because you think it makes you seem smart, just say you like nostalghia or something actually good instead. i know you people are fakers.

this is the way the gamesman revolution ends...

the powers that be don't want you to know about the gamesmen. why could that be? how much do they stand to gain from a sequel to gerard butler's 2009 smash hit action sci-fi blockbuster gamer? or the continued success of pc gamer magazine? here's what i have to say about that: a gamesman ain't got a soul of his own, just a little piece of a big soul, the one big soul that belongs to all gamesmen. wherever there's a mod locking up a fellow gamesman's thread, i'll be there. wherever there's a fight so australian gamesmen can play mortal kombat, i'll be there. i'll be in the way gamesmen votekick when someone's using hax in team fortress. i'll be in the way gamesmen laugh when they want to play with poo poo and duke nukem forever gets released, and the way gamesmen are playin' the maps they make in forge world and the levels they make in littlebigplanet.

i am no longer a gamer

i prefer to be called a gamesman.

someone should hire paulie malignaggi...

...as a boxing commentator when he retires. he's good at analysis and he's a colorful guy. better than lennox lewis is that's for sure.