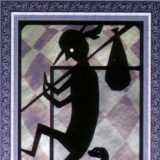 Some annoying bits about Fable 3

Firstly, the UI cues when talking with NPCs.  I find them really hard to read, so much so that I have to sit on my ottoman about 5 feet from the screen instead of on my couch about 12 feet away.  Being so small, they can also blend into the background (green A in front of the right part of a green tree, etc).  Another issue is that they are in the world.  Now, I can see some people saying its really neat to have the UI hidden away in the world, and some games do it quite well, but in Fable 3 that means the button cues can hide behind walls and other people, making it hard to know its there or possibly hard to know when it is fully loaded and the perfect time to release the button.  Another bit that annoys me is that you enter a conversation mode via button press and have to exit it by pressing B.  I wish I could walk up to someone, shake their hand, and walk away.  If only they would make moving your character be equivalent to ending the conversation, then that would at least be fixed.

Secondly the lack of menus.  I really hate needing to save,having to pause, walking to a glass pane with gears on it, pressing A and I finally get my menu.  I wish there was an equivalent of the old menu UI by pressing back (or pressing it while in the sanctuary).  Parts of the sanctuary can be nice and helpful, but I would also just like some menus so I can do what I need to do faster.  [Don't get me wrong, I really like the changes to the map (theres a map!), and the clothes changing room is better, but still other parts can be annoying]

Third, and possibly not as important, is that when making pies (possibly the other jobs as well), people can walk in front of the button bar, forcing you to guess what to press and when.  I had this happen once making pies where a person walked left to right and I never saw the cursor or the first color before I failed. It would make no sense in practice to have a cook and a table, and a person walking on the other side causing the cook to lose track of his/her food.

It is an awesome trilogy of books detailing the exploits of Azoth as he becomes apprenticed to the greatest wetboy ever known.

Assassins have targets. Wetboys have deaders.[...]Once you've accepted the contract, whatever's left of the target's life is just a formality.
- Durzo Blint

It would be nice

If there weren't so many jerks around here -_-

I don't like blogs but when I am bored enough, I can make the sacrifice for the quest completion.

It is now slightly wiki-fied.  I'm still playing through the levels though, the one I am on is pretty tough.  When I get a free day I'll try to get some screenshots and write a guide on the levels and the challenges associated with them, as well as the enemies.  This website is pretty nifty.