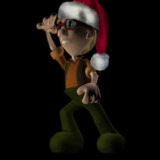 The game so nice, I beat it twice.

I really loved this game. It grabbed me in a way that Persona 4 grabbed me last year. Compelling characters. Epic storyline. This game had it all. I will try my best to not spoil any of it so you, too, can enjoy the full experience.

Immediately you feel the increase in the action. The last couple hours of the first game were roughly the equivalent of the Death Star trench run in the first Star Wars movie - And the setting kinda makes this feel even more appropriate. Charging and gunning down Geth in your final mad dash. Mass Effect 2 gets the ball rolling and carries it through the rest of the game.

I like the new feel of the gunning mechanics. I actually felt compelled to use the other guns. Picking off some dude and then ducking behind cover to reload added a cinematic feeling to the battles that I don’t usually get in other shooters. This game is a shooter that works well with my pacing.

I wish the hopping over of barricades was cleaned up a little. Always having to take cover and then press the button again to hop over is one of the few times the control system actually felt clunky. It’s the worst when you’re recruiting Archangel and have to jump 4-5 things in rapid succession. However, if you timed things correctly, Shepard looked like he was give a big exaggerated antic before hopping over, which was kinda neat to watch.

The hacking, and messing around with the circuit boards was a lot of fun. I found myself unlocking more things than I did in the first game because of that. But that planet scanning… It was just so slow. What would’ve made it better was if the scanner gave you a reading all the time and then you’d pull the left trigger to fine tune and pinpoint the meatiest part of the mineral deposit. That being said, thanks to the prospect of upgrades, I did more than a fair share of mining. If only I had found out sooner that doing Miranda’s personal mission would get me a slightly faster scanner. Emphasis on the slightly.

The characters in this game make the characters in the first one seem like ordinary citizens living in suburbia. The new crew seems to have more layers, and that might help in extending their stories for the next game. Plus, Grunt has some of the best facial textures I’ve ever seen in anything 3D. Kudos to the design, modeling and texturing team on that one.

The first game turned it up to 11 in the last couple hours. This one turned that dial all the way to 15.  For the first time in 2 games, I actually felt like a commander of a crew, not just the leader of a squad. I liked assigning other characters to other roles based who they were, what they could do and how they seemed as I talked to them on the ship. One would think that this might break away from the pacing, but it felt so organic to the experience.  Maybe doing it for every mission in Mass Effect 3 will be going overboard but, certainly on key missions, it will make for an exhilarating experience.

For those of you who haven’t played this yet. I recommend playing the first game. Get comfortable with Shepard, see his story from the beginning. Tough it through controlling the Mako - Maybe you don’t need to go exploring every planet, just use it to get from A-B. Then roll right in to Mass Effect 2. Live with the consequences of your decisions. Then, when you’re done and that Shepard is tucked away waiting for Mass Effect 3, go do an asshole run through. Cause seeing Shepard as a bad-ass douchebag is too fun!