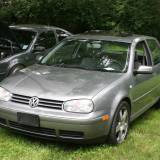 did you make a new playthrough with the anticipation of Skyrim?

So when Elder Scrolls V: Skyrim was announced I got the sudden itch to play Oblivion again. I did buy the game when it released for PC but I had since misplaced it somewhere and have not been able to find it still to this day. I have since bought the Oblivion GOTY Edition for the 360 off Ebay. The 1st time I played Oblivion I honestly didnt know what I was doing, only did a few Main Quest and just screwed around GTA-Style.

This go around I am gonna see this game to the end. I have rolled a Nord Spellsword. Honestly I'll admit I dont know much about most classes but im liking it so far up to lvl 6. I am glad to hear they had made the leveling much better as I didnt like having to go to sleep to actually get a level.

in all I cant wait already got my request for vacation the week after Skyrim is released, so i can play me some Skyrim and hopefully some Forza Motorsport 4 as long as neither get Delayed for any which reason.

Blogs Created:
11 blogs
Most Commented blog:
did you make a new playthrough with the anticipation of Skyrim?
Total Comments on blogs:
48 comments