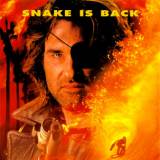 Timeless Objects in Gaming - The Medkit

From cracked ribs, broken skulls or grievous gunshot wounds – you can pretty much hang your hat on finding precisely what you need inside the nearest medkit. In fact, there’s probably a new hat in there for you, too.

Truly a pillar of classic game design, the miraculous medkits have essentially taken the same form for decades: a discrete package of ‘health’ to be picked up by the player, or stored in their inventory for later use. While it might seem an antiquated system to younger gamers, medkits have a profound impact on the particulars of gameplay.

Punishing mistakes and rewarding careful, considered progress, the reliance on health pick-ups adds an anxious energy to each and every battle, along with genuine consequences to your performance from one encounter to the next. Be it ‘Life’, ‘Health’ or ‘Hit Points’, generations of players have experienced the tension and the thrill of micromanaging their life bar with these literal life-savers.

Maybe it’s a silly and oversimplified substitute for real world medicine, but silly or not, hunting around for conveniently littered sources of the intentionally vague ‘health’ is hard-wired into the fiber of classic game design. And besides, we’re all satisfied with a little guy named Mario and his pioneering work with mushrooms as a rich source of rapid growth hormone, so a simplification of emergency medical treatment was never too hard to swallow.

But for such a long-time staple of game design, we’ve seen a startlingly rapid decline in this classic mechanic in recent years.

While they are certainly not the first games to feature a health system that strayed from the traditional format, it’s difficult to deny the influence Microsoft’s Halo franchise has had on the humble medkit. When Halo 2 decided to go ahead and practically invent online console gaming, its complete abandonment of the traditional health system was leaving an impression on a new generation of gamers worldwide. Running from gunfight to gunfight, every bit the super soldier in each encounter (regardless of how you fared in previous battles), regenerating health was an infectiously fluid and empowering change.

I remember it only too well - within a few short years, the immense popularity of convenient ‘regenerating health’ systems seemed to render the act of chasing around little white health kits largely redundant. All of a sudden, life bars and on-screen displays of vitality were rendered obsolete and intrusive, now more commonly replaced with saturated screens of blood and other cinematic effects.

While they may have been quickly outmoded by the slick and easy-to-grasp lure of regeneration, let’s not forget that the medkit is simply a placeholder for its real life battlefield equivalent - surgical tools and medicines. Any individual claiming to cling to even the tiniest shred of sanity would have a tough time arguing that the unique brand of spontaneous and magical rejuvenation found in regenerative systems is any more of a ‘realistic’ approach.

Regardless of their potential for application in modern action titles, health packs hold a special place in gaming. While fancy, new-fangled regenerative systems enjoy the benefits of triple-A production budgets and slick visual presentations, medkits are out there in the grit of it all, destined to spend their days in trash cans and old crates. Yet, behind this derelict exterior lies a mighty heart of gold and a truly timeless object in gaming.