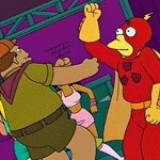 I'll Probably Never Go Back to Buying My Games

About 4-5 years ago, I had a bad habit. I would buy video games, play them until I either beat them or got tired of them, and then would trade them in. It got so bad, that I was basically trading in every game I bought, so in essence, I was paying $50 for a game, trading it in for $15-20, and then paying another $30 out-of-pocket for another game. Then I would trade in THAT game, and the process would start all over again.

Well, in about 2006, I had some home and living difficulties, which significanly cut down on my funds available for games. So, I decided to try just renting my games online. And it's probably one of the best decisions I've made. For $22 a month, I can play all the games I would normally buy, plus take chances on games that I otherwise wouldn't ever think of paying full price for.

I am not one of those people who buys a game, and then sticks it on a shelf to show off to others. The size of my collection is irrelevant to me. To me, the most important thing is playing all the games I want to play, and doing it in the most economical way possible. For example, this past fall, I was able to play all these games, and get the most enjoyment out of all of them, for basically $66:

I was also able to re-rent COD4, a game that I got tired of last year.

Now, even if I did make a decent living, money wise (which is doubtful, being in the industry I am in), I can't see myself going back to the days of the deadly trade-in cycle.