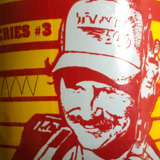 The Rebirth of Local Multiplayer

My brother, Marshall, is five years my junior. I’ve shot my brother more times than anybody else in my life. I’ve shot him in the feet, in the hands, in the head. Probably a lot of times in the head. All in the digital realm, of course–except for the time I had a translucent plastic airsoft gun and shot him in the back of the thigh once by accident. We were both little kids still, but my brother was the much littler kid and my mom got really pissed. She broke a wooden yardstick over my ass because of it. It was really funny.

I’ve been in the middle of a video game life-crisis, because I can’t decide the era of system that I really grew up alongside. I started playing games very early in life and the first games I remember playing are Indiana Jones Greatest Adventures, Super Return of the Jedi, Super Mario World, and Unicracers. I feel cool having cut my teeth on those consoles in an era where seasoned gamers routinely gawk at those videos where teens play Mega Man and say silly things because they’re on camera. “You have to play with your hands? That’s like a babies toy!”

I remember going to my uncle’s loft apartment and playing Tekken with him and my dad on PS1, and thinking that was incredible. The jury is in by the way, and Tekken totally holds up still. I remember my dad coming home from basic training, and my mom had bought Crash Bash and a four-controller adapter as a sort of homecoming gift for all of us to play.

I’ve never owned a Nintendo 64, so I sort of missed the boat on Goldeneye 007. On top of that, my brother wasn’t born until the Millennium, so most of the games we played together were PS2 titles. Most notably are probably 007 Nightfire and its slightly younger, better-playing counterpart, Agent Under Fire. It’s been a long time since I’ve played that game, but it had a mode that my brother and I called “VIP”. The map was a train station, and a brown-suited NPC with a silver suitcase would spawn and mill around for a moment waiting for his train to arrive. One player (or one team) was tasked to kill the VIP, while the other was tasked to protect.

We would give that Sam Bernstein lookalike the motherfucking business. Obviously being a half-decade older than my brother, I’m not sure VIP ever boarded the train on my brothers watch. Even when it was my turn, I would wait until the doors opened and the VIP began his walk animation, and I would shoot that fool in the back of the head.

It was only around the last console generation that connecting your home console to the internet became a necessity, but it was in the PS2 era that I first remember being hit by games that only supported online multiplayer. For example, I loved SOCOM: US Navy SEALs and I remember staring at the back of the box seeing the windows that said “1 Player”, “Online: Ethernet Broadband Required”, and “Network Adapter 2-32 Players”. I was completely baffled, just thinking “What? This doesn’t make any sense, it must have (local) multiplayer”. But it didn’t.

In recent years, couch co-op and multiplayer might have existed, but they were certainly relegated to the background. Splitscreen shooters that had sort of made up the genre have been basically rendered obsolete by the simply better experience that an online match provides. Fighting games have been up and down; they’ll probably never be “what they were” ever again even though we are still somewhat in the wake of the fighting game renaissance that was kickstarted by the release of Street Fighter IV.

A lot of local multiplayer titles found their way to us in 2014, and it was glorious! Gang Beasts, Towerfall Ascension, Nidhogg, Jackbox Party Pack, Mount Your Friends, Sportsfriends, Super Smash Bros. There are probably a bunch of other ones that I’m not cool enough to know about.

Video games have had multiplayer since the very beginning, but in the past decade games have drifted further and further away from the shoulder-to-shoulder shouting chaos that used to happen in our bedrooms and living rooms. We don’t need to invite people over to play multiplayer games anymore, but that fact has ironically breathed tons of life into the newly-minted genre of local multiplayer/couch co-op.

The games that are part of this new scene are intoxicating. I’ve spent so much time sitting in the dark with headphones on, shooting strangers, it’s an incredible feeling to play with friends and family. Experiences that feel so fresh and simple, that I can invite anyone to play with me. I regularly play Fibbage and Drawful with my fiancee, her parents, and her little sister. I managed to get my fiancee and her sister really into Towerfall as well, and it was a great feeling. Games like that provide a pick-up and play sensibility that has long since been absent from games.

I’m not sure if 2015 will produce the sheer number of couch co-op bangers that 2014 did, but even it doesn’t, I don’t think it means that those games peaked in 2014. Moreso, I think a new genre was created, and I’m really excited to be seeing games in the same vein for years to come.

It's taken me quite a while to write this year for some reason, but while I still plan to post here for a little while, I have a video game blog of my own. Check me out sometime!

I actually miss local split-screen multiplayer. Even now I do look for games that offer local co-op just so I can get that kind of interaction again. I bought Diablo 3 and Worms Battlegrounds just for the offline co-op and I really wish more developers would see there was a market. I think a big part of it is once you put a game online then you have a licence to charge for extra DLC and season passes so if they moved back to local multiplayer they would risk profit, especially when they can market micro-transactions so the other player automatically has an advantage or vice versa. You would think that with big screen TV's being so popular developers would realize that splitting the screen wouldn't take up too much of the players viewing pleasure. I remember even buying Call of Duty games for some local missions mode, I don't even like the series but that mode was really good, I think it was on Modern Warfare 2 or 3 and by now they must be up to Modern Warfare 10.