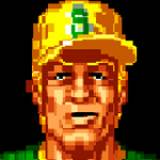 Time's a wasting, and it's easy as pie. Register to vote right now and tell the Commie hordes to go f- themselves with our sweet, delicious freedom.
1 Comments

My review is up here -- http://www.giantbomb.com/profile/sgthalka/reviews/

I didn't like it. Maybe you did? Tell me what I'm missing here.

Besides graphics or alien sex.

Made it about 8 hours in ... I'm not sure why this game isn't catching my attention. The combat system is decent. The conversation system and dialogue are generally interesting. The soundtrack and graphics are fantastic.

Maybe part of it is KOTOR deja vu -- where I feel like I've already played this game, just now it has new names and graphics. The universe lore is fairly complex and well-developed, but it also feels like a transparent substitution of Star-Wars-into-Mass-Effect.

Maybe it's the characters? I don't feel personally invested in the main character at all. The flat delivery of lines doesn't help -- maybe the female lead is more impassioned than the male reading-the-phone-book voice? The NPCs are a little stiff and the conversations are stilted book passages.

I don't know. So far I stopped playing a few weeks ago, went on vacation, and don't have any desire to really finish the game now. I'll keep plugging away, bit by bit. I just thought I'd be a lot more addicted to this.

Why do I love the summer? Let me count the Top 5 ways.

Who came up with this idea? Why do I get these now that I'm a working professional? I guess kids obviously have the market cornered on summer vacation and all. But hey, THEY'RE NOT GETTING PAID TO NOT GO TO SCHOOL. Whoever came up with Summer Fridays, and allowed me to have them, deserves a Nobel Prize ... for Awesomeness.

And what's great about that? ... EVERYTHING.

3. Every weekend is AN EXCUSE TO GO ON VACATION.

Hey! It's Friday! And it's the summer! Hmm -- what to do, what to do ... I know! Go on fucking vacation! (Can we swear here?) You don't need an excuse to go on vacation in the summer. Because IT'S THE SUMMER! Go to Baltimore! Take a train to Philadelphia! Who cares, it's nice outside!

Mind you, I live in New York. So we don't quite get the Florida / Hawaii / California level of bright sunny rain. But it's close enough. Rain drizzling down a sun-filled day owns. Anyone who tells you different is a goddamned Communist. And maybe ... just maybe ... you'll catch a peek of a rainbow. Aaaah.

Each night my neighborhood is filled with the sweet aroma of seared sirloin on metal grills. There's something about seared cow that lifts the spirits, reaffirms our American way of life, and makes me want to watch The Criterion Collection release of Robocop.

Greg needs to come home. Forget about Electronic Arts and those meh Command & Conquer games. Old-school GS must reunite under the banner of good. Get Kasavin back on the saddle! HE MUST REVIEW AGAIN.

But yeah. Congratulations to the Giant Bomb folks for upstaging Gamespot and for giving CNET a giant middle finger. (In a productive way.) Site is looking great on Day One.