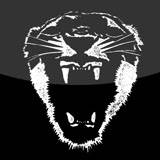 Prince of Persia: The Sands of Time is the epitome of great 3D platforming. When Ubisoft announced that they were rebooting the Prince of Persia franchise for the current generation I was among the millions of people who got very very excited. The new Prince of Persia game has a completely retooled art style that makes it look like a drawing come to life. You run around in an open "corrupted" world trying help heal different areas of the land to prevent an evil God from taking over. The new art style really looks phenomenal and is unbelievable to watch as you play through the game. Part of the experience of this game is just witnessing the gorgeous visuals.

Running along with you is your partner, Elika, the daughter of the King who released the evil God into the world. It is up to you and her to defeat the four bosses of the land (the Alchemist, the Concubine, the Hunter, and the Warrior) in any order you'd like. Every time you defeat a boss they will let loose a new type of "corruption" or trap into the world.

One of the things that really got my attention in the new Prince of Persia was the the importance of Elika. She not only plays an important role in the story, but is also a key factor in the gameplay. When you fall she grabs you, when you're hurt she helps you up, when you need to make a jump she lends you a hand, and when you need an extra hit during a fight she jumps in to take a turn. The developers really did a fantastic job incorporating her into the game and making her feel like a character you absolutely need to complete certain tasks. There are times when she will get injured or knocked down and for that second that you're battling on your own you really notice how much of help she was, and how much you miss/need her assistance.

The gameplay is really good and although at times it feels like the game is playing itself and you're just watching some fancy animations, it really does a good job of keeping a certain flow going. There is so much joy to be had in stringing together perfect wall runs, ring grabs, ceiling crawls, bar swings, and double jumps. Once you get a good rhythm going and can go for a while without it breaking, you'll see what I mean.

The combat is based around a combo system that lets you use your sword, gauntlet, Elika, and a jump move. It is pretty deep and is very fun to watch as you toss your enemy up into the air, throw Elika at them, punch them up with your gauntlet, have Elika through you back at them, then slam them down with your sword. It all plays out very well and looks fantastic.

My only gripe with the game is that is is fairly easy, and I like easy games. There weren't many challenging parts and I felt like I'd always make my jump or leap. It looked fantastic and while I was concentrating on not breaking my string of acrobatics, a deeper challenge would have been welcomed.

Prince of Persia is a fantastic display of a next gen game. The developers did something truly unique with the art style, really bringing the world to life with fantastic colors and scenery. I wish there was more of a challenge, but what is there is brilliant and breath taking. My eyes were glued to the screen the entire time. 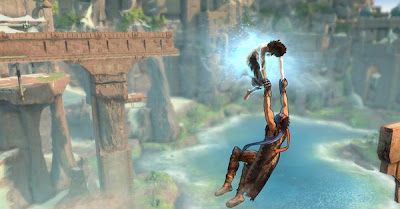 Argh, God damnit you son of a bitch!
Holy shit, that was awesome!
Those are the two main thoughts that were racing through my head throughout every stage of Mirror's Edge.  Mirror's Edge is a first person platforming game in the vain of the Prince of Persia series.  You are tasked with running across rooftops, corridors, and air ducts, trying to find out who framed your sister for murder.
The game is beautiful, when it wants to be.  The city and rooftops all look fantastic when you can see them in the background as you're running.  The same goes for the saturated and color filled offices and corridors.   However there are many textures in the game that just come off as awkward.  You constantly get glimpses of Faith's (the main character) hands as she grabs onto ledges and swings from poles.  Every time her hands came into the frame they just looked muddled with dull textures that almost looked like they were from the PS2 era.  It's odd because the city is dazzling with color and rich textures, but once her hands came into the scene it looked like you were controlling an 80 year old women with wrinkled old man hands.
I have two main problems with the game.  First, I found it hard to figure out the best spot I could grab next, wishing I could just continue my string of jumps and tucks that were getting my adrenaline pumping.  A perfect example of what I'm talking about is Sonic the Hedgehog.  There are always times in those games where you're zipping along going super fast, only to hit a wall, or some spikes, or a poorly placed enemy.  It brings the speed to a halt and you forced to go very slow to jump over the spikes, or jump up a wall, then continue your speed run.  I got the same exact feeling from Mirror's Edge.  I would be jumping and swinging along having a blast, then I'd hit some weird area where it wasn't obvious where the developer wanted me to go and I had to walk around trying to figure out what I could grab or duck under.  It completely ruined the feeling that Faith was a pro at this and with a few button presses she'd be able to run and jump wherever she wanted.  There were times in every level where I was brought to a screeching halt, making me urge for a level where I could run and platform for more than 2 minutes without being stopped.
My second complaint about this game is that it always felt the need to force you into combat situations.  The combat in Mirror's Edge does work, it's just not as good as most shooting games.  This is understandable, after all you are a runner, not a shooter, so it makes sense that you wouldn't be able to aim very well, if thats what they were going for.  I mainly have a problem with the combat because it ties back into the first problem.  I just wanted levels where I could run for the length of the level and see if I can string together a ton of jumps without falling or missing a ledge.  The combat does nothing more than to take you out of that gameplay that makes the game so great.
When the platforming and running segments do shine through, the game is an absolute blast to play.  I was getting pretty frustrated at the end of the game from constantly having to break my streak to figure out where to go, but when I got to last section in chapter 8 they really gave me what I was looking for.  I won't say anything to spoil it but all you need to know is that you're tasked with getting to the roof of a building.  There was no one in my way and for about 25 minutes it was nothing but great platforming, jumping, running, tucking, wall running, and ledge grabbing.  That's what I was waiting for!  If only the entire game could have been made out of sections like that, I would have liked it a lot more.  Those section are what make the game truly special, and accomplish something that hasn't been done before.  Being able to platform like that in a first person view was a fantastic experience, I just wish there were more lengthy segments like that last bit.
The story is pretty much non existent, it's told through poorly  animated "E-Surance-esque" cutscenes.  They really don't make you care about any of the characters and don't do a very good job of fleshing out the plot.  The sound in the game is great, the music and ambiance come through very well and really set the tone for the dystopian city you're running in.  The sound effects when Faith runs and jumps, and hits a ledge are fantastic.  The sound of your heart and breath when you get going really fast can be very exhilarating.
Mirror's Edge: 7.5/10
Ultimately Mirror's Edge was a fun game, but like the Sonic games, I hated when it broke up my running streaks and left me wondering what I had to grab onto or duck under.  I constantly wanted sections where I could run for the entire level without interruption, and they only came towards the very end.  The combat was wonky at times and really only bothered me because they broke up the running sections.  The reason Mario Galaxy is so good is because it sticks to what it knows, platforming.  If Mirror's Edge had just stuck with the running aspects of the game, EA and DICE would have had something amazing on their hands.  I'm not trying to sell the game short, there are sections of the game that are unbelievable and very new, they are just buried under other sections filled with wonky combat and frustrating level design.
originally posted on spincookie.blogspot.com
7 Comments