By ratcheting up the over-the-top elements with each entry in the Saints Row franchise, Volition wrote themselves into a bit of a corner. What started as a GTA clone with a goofy sense of humor turned into a ludicrous affair with characters that could fly across the map and access superpowers. Once characters were shooting fireballs from their hands and flying around Hell with demon wings, there wasn’t a lot of room left to keep cranking up the crazy.

Agents of Mayhem is not officially a Saints Row game, but the DNA of that franchise is plain to see throughout. My hope was that by introducing this as a new series, it’d give Volition a chance to dial things back a bit. Saints Row: The Third was my favorite of the bunch, hitting the sweet spot of silliness without taking things too far. Unfortunately, Agents of Mayhem misses the mark in many key areas and ultimately disappoints.

While Saints focused on a street gang, Agents is more of a send-up of comic heroes and Saturday morning cartoons. Twelve heroes are unlockable, including a vain actor, a drunken roller derby girl, a soccer hooligan, and a Yakuza assassin. The cast of characters may be diverse when it comes to their ethnicity and abilities, but they’re one-dimensional in every other regard. Considering you have access to a dozen playable characters, I don’t envy the writer that had to come up with unique dialogue for every one of them in every situation.

Like much of the game, there’s definitely a “quantity over quality” feel to the myriad jokes. Saints Row wasn’t a comedic masterpiece, but it had some clever writing and a consistent tone. Agents of Mayhem is constantly straining to be funny and coming up short. So much of its material seems hinged on the concept of “this is like a kid’s cartoon, but they curse all the time!” It’s a lazy, boring approach that isn’t funny at first and certainly doesn’t get better as they lean on the cursing for the rest of the game. Jokes that aim higher than simple F-bombs and dick jokes never get much more sophisticated than zingers about how the planet Uranus sounds like a butthole.

The tone of the game’s humor immediately turned me off, but I hoped to find solace in the seemingly robust upgrade system for each character. A crazy amount of tinkering is possible, with different systems in place for skill points, altering special abilities, building “Legion Tech” modifiers, collecting three core upgrades for each character, and more. On top of the individual upgrades, you also level up the Agency in general, which unlocks passive improvements no matter which agent you’re using.

With so much variety in the characters and the level of customization, I was optimistic that these elements would help me enjoy the game despite the lame humor. It didn’t take long to realize that most of the upgrades feel insignificant. Most are changes to status effects or a slight statistical change. I love the idea of making my squad of heroes progressively more powerful, but upgrades that give me a 2% boost to an ability never really feel satisfying. Some more significant upgrades that affect mobility or speed would be nice, as none of them make the act of running around the game feel any different.

Exploring a futuristic version of Seoul is as unrewarding as the character progression. For an open-world game, Agents of Mayhem suffers from a dearth of things to do. There are boilerplate side objectives like finding crystal shards, participating in checkpoint-to-checkpoint races, collecting marked cars, and destroying enemy tech, but these never feel good or particularly beneficial. Seoul itself is weirdly lifeless, with bland environments and empty streets. The pedestrians don’t even seem to have any VO.

It doesn’t take long at all for the game to demonstrate its lack of mission variety. So many of the main story missions boil down to running to a computer, doing a hacking mini-game, and then clearing out some enemies before doing it all over again. Confusingly, many of these missions begin by forcing the player to climb to the top of a building or going to a marked location for no discernible reason. Playing through the story is a mind-numbing process of following objective markers, hacking terminals, and shooting hordes of enemies. Another recurring mission structure involves going underground to fight through Legion lairs that are virtually indistinguishable from each other. A handful of boss fights occasionally break up the monotony, but it’s not enough to make up for the rest of the slog through the story.

Agents of Mayhem is boring, but it’s also janky as hell. Music from cars will sometimes continue to play over animated cutscenes. In the upgrade menu, the UI will frequently display “NEW” over characters that have no new upgrades available. Draw distance is rough, even on a PS4 Pro. Missions will break when enemies get stuck in inaccessible areas. Load screens can hang and force a restart. I received the same “hey, you can build this upgrade that you don’t actually want” notification at least 60 times. One of my characters died, but started sliding across the ground during the death animation. I wasn’t able to switch characters or even pause, and had to restart the game. Characters will make jokes that have nothing to do with the situation at hand, then repeat them ad nauseum like a malfunctioning quip robot.

Agents of Mayhem is not a good game, but there were brief times that I experienced feelings that resembled enjoyment. The twelve characters do all feel different, from their abilities to their weapons. I liked mixing and matching my active squad and determining which agents I liked and which didn’t fit my playstyle. As I progressed, I became increasingly annoyed by an unrewarding upgrade system, a lifeless city, technical issues, and an unrelenting procession of boring mission objectives. It doesn’t help that it didn’t make me laugh once despite trying desperately to do so every five seconds.

I looked forward to seeing what Volition would do with a new open-world franchise. They turned Saints Row into something much more unique than the franchise’s GTA-inspired roots, and a new take on that universe could have been a great move for the developer. Unfortunately, any joy, character, humor, or interesting gameplay has been stripped from that series and left us with a wholly disappointing mistake. 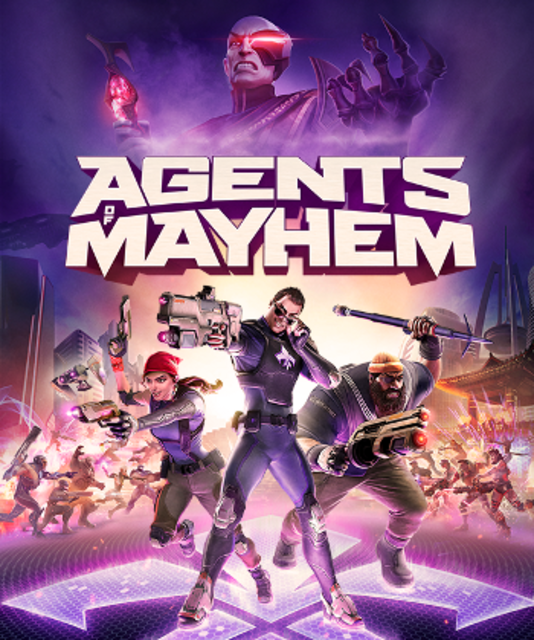