Watch the protégé surpass the master as Dan teaches Vinny the ins and outs of ARMS.

Nintendo's newest title delivers on tone and fleeting fun, but struggles to sink its hooks in.

It’s been a hell of a year for Nintendo fans. March saw the launch of the Switch, the company’s hottest console in over a decade (and thankfully, one with a gimmick that actually works well). Alongside it, fans were treated to one of the most ambitious and well-received Zelda games of all time. If that weren’t enough, Super Mario Odyssey stole E3 with its bonkers trailer and great demo. Between the Switch’s big launch and Mario’s October release, the summer of 2017 plays host to two of the company’s newest IPs. Splatoon 2 is set to follow up on the surprising success of 2015’s multiplayer-focused title, but not before Arms has a chance to prove that Nintendo can produce another solid new online property.

In some of the same ways as Splatoon, it succeeds. Its tone is immediately likable, greeting players with a catchy theme and an inviting art style. Ten fighters are available, including a pulsating blob-man, a robotic beach cop/guard dog duo, and a girl with ramen noodles for arms who can turn one arm into a dragon. They’re some of Nintendo’s weirdest characters in a long time, and that’s counting the children that turn into squids and paint each other.

No matter who you pick, the core components of combat play out the same way. Each character’s arms (or in Twintelle’s case, pigtails) are inexplicably long and springy, allowing for punches that can stretch across the length of large battle arenas. Once a punch has started its flight, it can be curved to adjust to your foe’s movement. If you press both punch buttons, your arms will extend in an attempt to grab them for a throw. Outside of a dash, jump, and block, that’s about it for the basic controls.

If that all sounds a bit simple, it’s because it is. Grasping the controls doesn’t take long, but there is a little more depth that becomes apparent as you continue to play. If you hold the dash, jump, or block button for a couple of seconds, your next punch can be charged with a powerful elemental attack. Each character comes with their own special abilities, but the game does a poor job of making this known (you have to dive into a help menu to see their descriptions). Ribbon Girl can perform multiple jumps in mid-air, Min Min can deflect incoming attacks with a spinning kick, and Master Mummy can regain health while blocking. These important traits will help you determine whose playstyle is best for you, so it’s best to jump into the help menu and read up on them as soon as you start playing.

Much of Nintendo’s pre-release footage of the game showcased players with a Joy-Con in each hand, shadow-boxing with motion controls. While this works alright for the most part, it occasionally makes controlling your fighter feel like an awkward Wii game. I greatly preferred using the pro controller, even if it does come with the minor handicap of not being able to curve each arm separately. This also requires you to block by clicking in the left stick, which is less intuitive than several other available buttons. With no option to remap the controls, I did my best to get used to it. Even with its drawbacks, I felt like the pro controller offered me better direct control over my character and attacks than the imprecise motion controls.

Arms come in a variety of types. On top of standard boxing gloves, your fists can be equipped with heat-seeking missiles, party poppers, flying discs, laser-spewing dragon heads, and more. The bigger and heavier they are, the harder it is to counter them (a Megaton ball will pass straight through a counter attempt from a party popper, for example). In addition to their types, most arms also feature an elemental power that can inflict temporary status effects on your enemy. The variation in arms can lead to some interesting strategic opportunities if you notice an opponent relying on a predictable method of attack.

New arms are unlocked via a drip-feed of in-game currency that you’ll earn as you play through the various modes. Rather than using your cash to purchase items outright, you use it to purchase time in a target shooting gallery that rewards you with new arms. As you strike enough targets, gift boxes float across the screen that contain your prizes. These can be arms for any character, but you tend to get more for the character you selected for the shooting gallery. A couple of factors lead to this system feeling underwhelming. For one, it takes a long time to build up enough currency to purchase significant time in the minigame. Also, your prizes are simply other characters’ default arms. It’s not like you’re unlocking or leveling up new arms, you’re just unlocking the ability to use one of Helix’s arms on Spring Man, for instance.

My early bouts in Arms were little more than silly slap fights, featuring me wildly throwing and curving punches. As I played more and started to improve, I found the fights to be more rewarding. Playing through the ten-stage Grand Prix mode on the easiest setting allowed me to breeze through with perfects without any real strategy. Once I started working my way up the difficulty ladder, however, I found it much more necessary to utilize counters, blocks, and my character’s special abilities.

Even with the added depth that’s necessary during higher difficulties and online play, Arms never becomes deep enough to feel as rewarding as a more traditional fighting game. On the other side of the coin, it doesn’t capture the pure chaos of goofier fighters like Power Stone or Super Smash Bros. It exists somewhere in the middle, with a little bit of depth and the occasional interactive environment but not enough of either to really get into a groove.

If the moment-to-moment fighting doesn’t exactly thrill you, then there isn’t much else for you to do in Arms. Bringing in a friend or three can be fun for a bit as you compete in free-for-alls or 2-on-2 battles. Minigames like volleyball and basketball are interspersed throughout the single-player Grand Prix matches and available in multiplayer, but they’re bare-bones distractions at best.

Unlocking other characters’ arms is the only form of progression in the game, as you can’t level anything up or buy new cosmetic gear. Splatoon was criticized by many for its sparse assortment of modes and progression, but its launch offerings seem robust compared to what’s available in Arms.

It’s encouraging to see Nintendo experiment with new IP, especially in these early months of the Switch’s release. That said, Arms doesn’t make the same splash that Splatoon did two years ago. It introduces some great new characters and some entertaining gameplay, but the depth of combat and overall amount of content is lacking. Online play features a ranking system, but ranking up does nothing for you but change a number onscreen and earn you a little bit of currency. I never felt like I was progressing in any meaningful way, and the lure of unlocking new arms for my characters wasn’t strong enough to make me want to dive deeper.

If you play enough Arms, you’re bound to have the occasional thrilling, close-fought bout. These brief moments are fleeting, however, and the game simply doesn’t give you enough reasons to keep coming back. 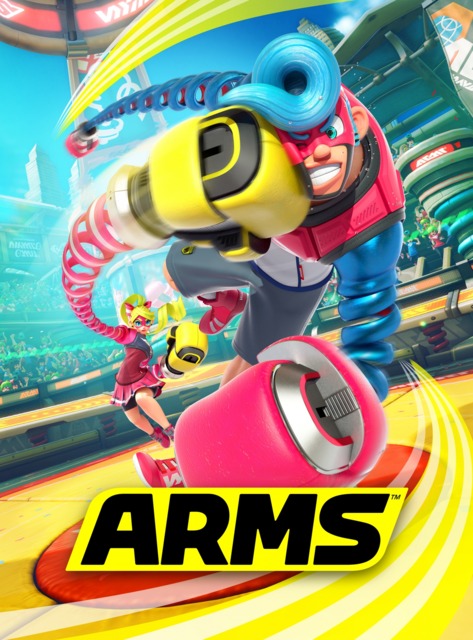