by Patrick Klepek on February 20, 2014
Share:TwitterFacebookReddit

It's easy to imagine a big-budget game tackling slavery with the subtlety of a hammer, but Freedom Cry is an emotional triumph...with some ethical issues.

As risk averse as some (most?) big-budget games are, we often see publishers loosening the reins with downloadable content. Ubisoft has shown itself as a publisher willing to take a risk, exemplified by Far Cry 3: Blood Dragon and the recent Assassin's Creed IV: Freedom Cry. The latter was just made available completely separate from Assassin's Creed IV: Black Flag (except on Xbox), and it's crazy more people haven't been talking about it. Freedom Cry represents a AAA publisher trying to make the deplorable, shameful act of slavery both a narrative and mechanical part of a game. It's not without problems, but it's a hell of a try.

Black Flag players have already met the main character of Freedom Cry, Adéwalé. The add-on is set years after the events of Black Flag, but does not remark on them, except for the occasional mention of the main game's protagonist, Edward Kenway. Adéwalé, now an active member of the Assassins brotherhood, intercepts a Templar package. It's unclear what's inside, but it's clearly important, so Adéwalé makes off into a deadly storm with it. Nature tears apart his ship, and he wakes up on the shores of Port-au-Prince. Slavery was mentioned in Black Flag, but it's central to the economy in Port-au-Prince and the nearby islands. Adéwalé becomes involved in the brewing revolution, promising assistance before returning to the Assassins.

Even though Black Flag represented a welcomed return to form for a series that was almost made irrelevant by its third major entry, there was so much to digest. I spent more than 30 hours as a pirate on the high seas, and it's easy to imagine how one could more than double that. So I wouldn't blame anyone for being tired of Black Flag by the credits, especially since Ubisoft is likely to deliver another Assassin's Creed this year. In that regard, Freedom Cry doesn't do much to mix up the formula that's worked so well for the series since finding its footing with Assassins Creed II. On-foot missions are still largely about frustratingly trying to eavesdrop on a group of characters who constantly look behind themselves for no good reason, killing a set of assigned targets, and generally stealthing around. Life at sea has not changed very much, either, but it remains damn fun.

What has changed in Freedom Cry, however, is the context of your actions. The ongoing, mostly tired tug-of-war between the Assassins and Templars is merely window dressing in Freedom Cry, with Adéwalé's central motivation a desire to free his brothers from the shackles he once found himself in. There's a good reason games have largely steered away from the subject of slavery. It's harrowing, personal, and deeply emotional. Even though the Assassin's Creed series is one born of a fantastic premise, one cannot invoke the very real concept of slavery without strict scrutiny alongside it. And this is where Freedom Cry both soars and stumbles.

I could never muster the desire for the optional objectives in Assassin's Creed. It's a feature for completionists, and seemed to encourage player behavior that highlighted the very worst parts of Assassin's Creed gameplay. But I often found myself trying to do everything in Freedom Cry. It's one thing to ask the player to try and air assassinate a target, and quite another to ask them to rescue a group of slaves on the compound you're exploring. This is a fictional experience, but that's a powerful string to tug at. As a player who often errs on the side of helping, it was hard for me to justify not making sure these types of objectives were completed. It not only made sense for the type of character I play as, it perfectly lined up with Adéwalé's deeply personal reasons for action in Freedom Cry. It's not that Freedom Cry completely reinvents the often boring objectives that drive missions in Assassin's Creed, but the contextual reframing gives them a powerful emotional component.

But there are reasons to raise an eyebrow, as well. Rescuing slaves is one of the key gameplay additions in Freedom Cry, and you're constantly reminded of ways you can help. A slave may be trying to escape from their captor, and you can stop the chase. Another group of slaves may be in the process of being sold, and you can step in, buy them, and set them free. Some of them may join the fomenting revolution in Port-au-prince, while others are simply allowed to live their lives. This makes sense, and from the perspective of designing a fulfilling open world, this gives the player regular, meaningful actions to participate in while getting to the next mission. What's questionable is Ubisoft's decision to turn the slaves into a form of in-game currency, a cruelly ironic twist. The more slaves the player frees, the more upgrades available from vendors that support Adéwalé. This generates a horrific disconnect from the very human tragedy the upgrade system pulls from. It's an especially gross feeling to be running around a town square, waiting for slaves to spawn on the map because you're only a few away from unlocking that really sweet machete. (This actually happened.) It's mostly unnecessary, too, as players accrue most of the upgrades simply by engaging with the required mission objectives. That includes rescuing slave ships, which can house nearly 100 captives at once. There's already an in-game currency the player uses to buy stuff, so while it's understandable Ubisoft designers wanted to reward players for engaging in side objectives, it only undermines the seriousness with which the game otherwise treats the subject.

And there are genuine moments of emotional heartbreak where all of these concerns, for the moment, fade away. An especially trying moment involves Adéwalé defying the recommendations of his fellow revolutionaries, and attempts to free a nearby slave ship. It all goes horribly, horribly wrong, and puts the venomous, inhuman contempt of Port-au-Prince's cruel rulers on full display. When you can't save everyone, who do you save? It's a moment in which Freedom Cry poignantly layers the draw of a spectacle that is only possible in a big-budget video game with the subtlety we have come to expect from our best independent productions. One section involves Adéwalé climbing up a wall, the same way a character in Assassin's Creed often does, but what surrounds you is...unforgettable. When the mission was over, I had to set the controller down. I was drained, and Adéwalé's pain was my own. We were both equally seeking blood and revenge.

Freedom Cry is about hope. It's about hope for a people, even if it feels futile and fleeting. You don't solve the problem of slavery in Freedom Cry. The way slaves and plantation owners constantly cycle back into the world, no matter how many you liberate, also works as genuine commentary on the state of slavery at the time. It might just be a way the game keeps the world from becoming empty...but it works. The add-on also gives hope for what's possible when blockbuster-driven creators take risks with material. There are missteps in Freedom Cry, more ethical than mechanical, but it hits as often as it misses. That's undeniably an important step forward. 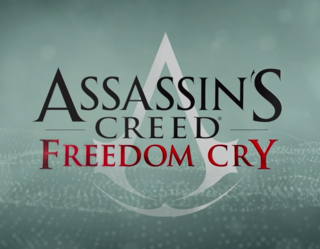