by Ben Pack on October 12, 2017
Share:TwitterFacebookReddit

Come for the beautiful art, stay because you smashed all your controllers.

Cuphead’s original reveal in an E3 2014 Xbox sizzle reel of indie games was only seconds long, but that was enough to sell me on its potential. Take one look at the game in motion, and you’ll see why. Cuphead combines brutal, precision platforming action with an exceptionally well realized artistic style to create one of the most enjoyable video game experiences I’ve ever had.

Cuphead is an action-platformer in the style of games like Gunstar Heroes. Your basic abilities will have you running, shooting, and dashing around to dodge projectiles and enemies while damaging foes. Most of the game’s levels are static boss fights. These fights, when done correctly, are short and typically range from 90 seconds to three minutes. The key phrase here is “done correctly,” because the fun of Cuphead comes from its punishing difficulty.

Rather than upgrading your character with loot and deep skill trees, getting good at Cuphead is all about mastering the relatively simple controls. The most “technical” the game gets is when it comes to its unique parry system. Any pink object in the world, from enemies, to projectiles, to the nose on a vicious roller coaster, can be parried, or double-jumped off of, in other words--keeping you safe and adding a bar to your super meter. It’s a system that is easy to learn and helpful for beating bosses more quickly early on, and becomes vital for survival in later levels of the game.

In addition to standard pea shooter, Cuphead also has five weapons, that can be unlocked by collecting currency. Each of the weapons has their own advantages and disadvantages, and any two can be brought into each level and swapped with the push of a button. These weapons include a homing shot that deals reduced damage, a spread shot with short range, and my personal favorite a charge shot in the style of Mega Man. You can also equip one passive charm, which can give you abilities like a gradually increasing super meter or an invincible and invisible dash.

Where Cuphead truly sets itself apart from other similar games is in its art style. Cuphead looks, sounds like, and most importantly feels like you’re playing a 1930s American cartoon, specifically in the style of early Disney. The titular character, as well as his accomplice Mugman, even both resemble Mickey Mouse himself.

That’s not to say that the game is just a cheap rip-off, though. Each of the bosses feels truly inspired. The very first boss is a prime example of what to expect. At first, Goopy LeGrande is just a villainous slime whose only form of attack is to jump on you or form into a fist and lunge at you. He grows angry, and halfway through the battle takes a pill that makes him larger. He’s faster, bigger, and more dangerous. After dealing with this second form, the slime “dies,” and his third and final form--the giant vengeful tombstone of Goopy LeGrande--drops on the field and attempts to crush Cuphead, because that’s all he ever knew in life. Every boss almost tells a story just through its transformations. I’m still blown away when I see footage of all the bosses, even the most frustrating ones who were responsible for dozens of my deaths and hours of gameplay wasted.

These fixed-perspective boss fights make up a little more than half the game. The other playable levels of Cuphead are airborne shooters and “run-and-gun” levels. The plane battles play like boss fights from shoot-em-ups, using the same basic controls (parrying, super moves) of the platforming levels, but instead of swapping to a second weapon you can turn into a more mobile mini-plane. These levels can be some of the most difficult in the game, as the focus is much more on precise movement than usual. Run-and-gun levels play like the boss fights, but with a focus on dealing with smaller enemies and platforming. They feel like they could be longer, but are so dense with amazing art and enemy design that I had fun replaying them multiple times just to improve my rank.

Despite its inviting art style, Cuphead is not a game for everyone. It’s extremely difficult, and you might not think that the definition of fun is playing the same levels over and over again. There is also one major issue in the parry system. People with certain types of colorblindness may not be able to know at first glance which items are pink and can be parried. There are boss fights where it is almost mandatory that you do some parrying, and the fact that there is no colorblind mode may make it difficult for these people to beat the game. It feels like most video games have implemented colorblind modes, even when it is not imperative, so the lack of one in Cuphead stands out.

If you’re the type of person who derives joy from angrily banging your head into a boss over and over until you can perfectly defeat it in the most glorious 90 seconds you will ever experience, then Cuphead is the total package. The tight gameplay, accompanied by an incredibly well-realized aesthetic, makes for a truly unforgettable gameplay experience. 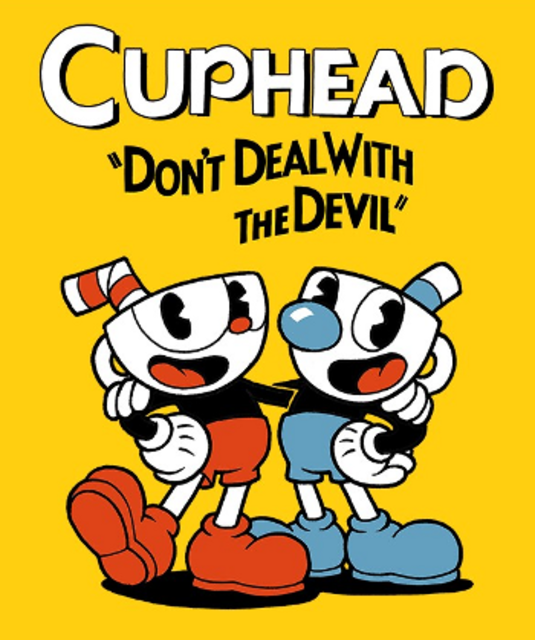