by Brad Shoemaker on May 28, 2013
Share:TwitterFacebookReddit

Insomniac's first multiplatform game in its post-Sony era comes in the form of Fuse, which used to be Overstrike, which used to be more humorous and stylized than the run-of-the-mill gritty, future-tech shooter it ultimately became. Fuse's bland art design and overall lack of personality are disappointing in the context of that initial reveal trailer, but under the hood it's still a generally well made third-person shooter with a clear emphasis on co-op and the imaginative weapons Insomniac is so good at dreaming up. But there are too few of those weapons, and a few too many irksome issues, to lift Fuse significantly above the many, many other cover-based shooters it's competing with.

The game casts you in the role of the four smartmouthed mercenary agents of Overstrike 9, who trot around the globe, hiding behind crates and shooting at faceless armored bad guys to satisfy the whims of their paying clients. In this case, you're hot on the trail of a for-profit terrorist outfit called Raven, who's in possession of the titular super-element, one of those pesky substances that behaves in whatever ways the plot--or the characters' unconventional weapons--need it to. Each of the characters have a single exotic "Xenotech" weapon taped to their arm. Group leader Dalton gets a "magshield" that you activate with the left trigger, which stops bullets and lets teammates shoot through it for extra damage. Naya has a warp rifle that lets you paint multiple targets and then set them all off in a really satisfying chain explosion. Jacob has the most broadly effective weapon with a crossbow that shoots a sort of energy dart that vaporizes enemies and is great for headshots. And redheaded Izzy has a rapid-fire rifle that crystalizes enemies for a few seconds when you pour shots into them, after which you can easily shatter them to pieces. These guys make limp little jabs at each other as the missions progress, but there's not a lot of life in the banter nor the storyline itself, the twists of which are easy to see coming a mile away.

You're free to play Fuse by yourself, during which you can quickly swap between characters to utilize their unique weapons and flank groups of enemies. For the first couple of missions, setting up warp chains or dropping a magshield to take cover behind is pretty interesting, but since each character is stuck with the same primary Xenotech weapon the entire game, the novelty wears off faster than it should. Each agent has a skill tree that you can put points into as you level up--and the way experience is doled out encourages you to use your weapons creatively, so you level faster--but the skill trees don't offer a meaningful level of customization. Instead, they really only offer you the choice between crit effects on your Xenotech weapons or increased damage on your regular ones, and aside from a few weapon-specific secondary abilities, each tree merely gives the same generic abilities to each agent.

Certain aspects of playing alone turn out to be irritatingly cumbersome. Most of the time, switching to another character puts you in a compromised position where you're out of range of the action, standing straight up in the middle of a firefight, or facing a wall while a bunch of guys are shooting you in the back. The AI characters will occasionally get in your way, jump onto a turret you're trying to use, or fail to revive you when you're down. Distributing skill points requires you to manually switch to the character in question, dig through the layers of menus to get to the skill tree, then back all the way out to the action and perform the whole process over again. It's a case of a few little things that add up to a big annoyance after a while.

Worse than those quirks, I just ended up feeling bored by the stretches of the campaign that I played through by myself. Aside from a few rudimentary climbing sequences, the entire game is one long linear sequence of large combat-oriented rooms laid out with numerous cover points and walkways. Most encounters give you a chance to knock out a stealth kill or two before the bullets start flying, but the only real choice you have is which cover or walkway you want to return fire from, and what kind of gun you want to do it with. There's so little to the storyline and such a lackluster attempt at humor on the characters' part, the endless shooting at enemies who usually sponge a ton of damage started to wear thin for me about two missions before the game was over.

Fuse is substantially more entertaining with other people. Even though you don't have the freedom to switch around as much and enjoy all the characters' specific weaponry, playing with thinking human allies lets you actually set up intelligent combos and maneuvers that you can't pull off with the AI guys (though, aside from going for headshots with Jacob's crossbow, you're really just dumping bullets into enemies with the same old guns, sometimes through Dalton's shield). Many of the characters' unlockable secondary abilities become more satisfying to use in co-op as well. For instance, Izzy gets a throwable healing beacon that can resurrect downed allies. Playing solo, I tended to just throw that thing at my feet when the fighting got intense, but playing the tougher last couple of missions with friends, I got to feel like I was taking on a useful healing role by aiming the beacon at teammates who were down so I could bring them back remotely and get back to the fighting. Playing with a team actually lets you flank enemies, which is good since what feels like roughly half of Fuse's enemies--from riot shield-equipped infantry to big hulking robot suits with vulnerable fuel tanks on their backs--need to be shot from behind. Solo, it's hard to get those enemies to face anyone but the character you're playing, but in co-op you can actually sort of kite enemies around and draw their ire (or aggro, if you like) so others can get back there and do maximum damage.

Playing with friends was so much more entertaining for me that I'd go as far as to say it's the only way you should play the Fuse campaign. I actually found three players to be a nice sweet spot, since you get plenty of intelligent tactical potential but can still swap around a bit if you need to take on a different role for some reason. Co-op doesn't fully alleviate the tedium that sets in as you dump round after round into the especially resilient enemies later in the game, but it's a heck of a lot more interesting than plowing through it all alone. If you want more Fuse afterward, you can replay individual chapters to keep building up your agents. I didn't finish any one character's skill tree by the end of the story mode, and only bought three of the the incredibly expensive team perks that increase your experience intake, give you more time before bleeding out, and so on. So there's still plenty of post-game leveling-up to do, if that's your thing. The most rigorous fighting is to be had in Echelon, a wave-based survival mode with rotating objectives that you certainly want four good players for if you're going to tackle it seriously. Bringing leveled-up characters into this mode is a must, and you'll earn a bunch more experience for playing it. But Echelon is tough enough that it also exposes some of the most annoying things about the game's enemies, like the cloaked ones that are hard to see in a firefight and will disable you the second they touch you.

Fuse's gameplay has some good ideas, but they don't carry enough weight in what's otherwise a shooter campaign the like of which you've almost certainly seen before. And it's hard not to think back to the exciting first trailer from two years ago, since many of the shipping game's most outlandish aspects would have been more at home in that highly stylized, wisecracking version that never got made. Fighting in an undersea base and a space station? An exotic Asian assassin who turns out to be someone's ex-girlfriend? A sneering Russian who shoots himself up with Fuse and grows 10 stories tall? It feels like the off-the-wall good ideas Insomniac had for that sillier game have survived, but those ideas are a bit uncomfortably at odds with the serious look and tone of the game as it is now. Fuse plays pretty well, but with smoother execution and a more cohesive identity, it would have an easier time standing out in a genre that, as this generation of consoles comes to a close, is wearing out its welcome more and more. 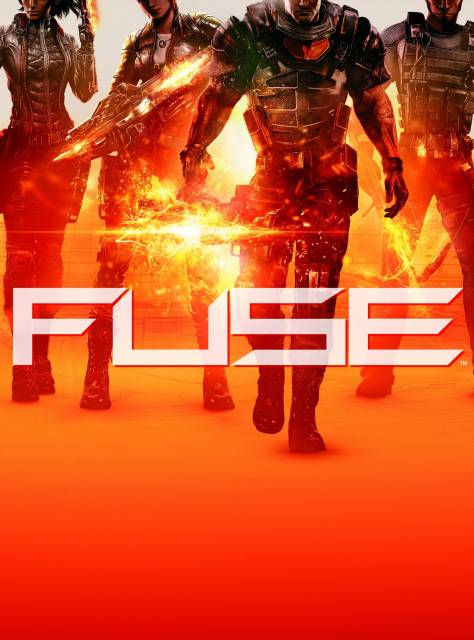