by Ben Pack on September 20, 2017
Share:TwitterFacebookReddit

Kingsway goes beyond being just a throwback to the past, and proves itself an entertaining game in its own right.

When you first boot up Kingsway, you immediately “get it.” From the startup sounds, to the launch menu in the task bar, to the grey-bordered windows, it’s immediately apparent that the game is a love letter to a time long-forgotten. More specifically, a time about 22 years ago.

Kingsway is an RPG presented as a faux-Windows ‘95-style operating system. Your character’s loot, world map, and everything else in the game are represented by different windows that you can drag around or minimize.

The level of detail in this likeness is insane. I spent a half hour customizing things like my cursor trail, theme, font, and cursor icons. And I hadn’t even seen the actual game yet.

The game starts with you building a character. You choose a class, which will determine which types of spells you can learn, as well as a character name and portrait. Important to note that Kingsway has one of my favorite name randomizers of any video game I’ve ever played; here are just five that I just rolled:

Your goal as an adventurer is to light three beacons spread out on a world map, then to go make your way to the king. You travel around by clicking points of interest that spawn as you progress through the overworld. There are sub-quests, dungeons, and random events that are all peppered around the world, as well as a hefty share of random encounters with monsters.

The combat starts innocuously enough; the first few skeletons and bandits you encounter present you with simple point-and-click RPG fare. You have five slots that come standard with options for attack, defense, escape, and two open spots for spells, but all five slots can be customized so you can be a wizard who foregoes his options to defend or run away in exchange for three different types of kickass fireballs.

As the game progresses, however, battling the enemies becomes more difficult as the game begins uses the OS interface itself against you. You might encounter a plant monster that whips its vines at you, which is represented in-game as two smaller pop-up windows that shoot in from opposite sides of the screen. If you’re not quick enough to click “evade,” then you’re hit with poison damage. Another enemy, the shadow bandit, randomly minimizes his own combat window.

You can draw numerous comparisons between Kingsway and Undertale, not least because both games, art, and design were all done by one developer (in Kingsway's case, that developer is named Andrew Morrish). Both games use a relatively simple combat system, and continuously iterate on and surprise you with that system throughout the game. The first time an enemy throws a fireball at you, odds are you won’t even realize that the pop-up is there. By the time you’re fighting your first miniboss and he’s throwing three, you’re an expert.

Kingsway’s novelty doesn’t hold up, however; you’ll likely see most of what the game has to offer about halfway through your journey. I was expecting bigger and crazier effects as the enemies got stronger, but outside of some minor tweaks to what you see in the first hour or so there’s less wild variation than there could be.

That’s not to say that the game isn’t difficult. I grinded and grinded with my first character, but was taken out by playing carelessly just shy of beating the second story boss when I suddenly realized I had made a grave mistake - Kingsway features permadeath. It’s not immediately apparent when you start the game, but with each new character comes a fresh world map. Your objective, to light the torches, is always the same, but how they are positioned and what other dungeons you might find are different for each playthrough.

Another thing that isn’t apparent until you do some digging is how many different ways the story can go. The game presents itself as having virtually no plot, but as you approach the end, you’ll begin to realize all those omens you kept hearing about “other worlds” might just have some validity to them. Even more than a month after release, I still cannot find a definitive source on how many endings there are and how you unlock each one.

That said, there are at least four endings that each unlock a new playable class for your other runs. Replay value is high in Kingsway, as you’ll earn gems when a character dies, which can be used to unlock starting gifts for future characters like +10 health points or a larger backpack, as well as different themes, fonts, or even hotkeys in the OS interface like “tab,” which gives you the incredibly useful ability to quickly tab through your windows.

The OS aesthetic doesn’t just end at the interface. You might play the game for an hour before realizing that there’s no music. To solve this, you have to open your faux-MIDI player and start listening to your 19-song music library (which turns out is maybe exactly the right amount of songs, because if there was one fewer it might be a little too repetitive). When you start the game you’re alerted that you are part of a guild and will receive quest update emails from them, which all end up being spam subject lines like “You Won’t Believe What This Potion Can Do For You” or “Skeletons In Your Area Want To Meet.”

At times I felt like I was throwing myself at Kingsway, trying too hard to beat it for the first time and not just enjoying the ride--and due to the semi-repetitive nature of the game, I felt myself not wanting to go back immediately after initially being drawn in by the game. After a short break, however, I came back for a daily run and it was more fun than ever. Kingsway isn’t the most complex or innovative game ever created, but it commits hard to its aesthetic, and that goes a long way. 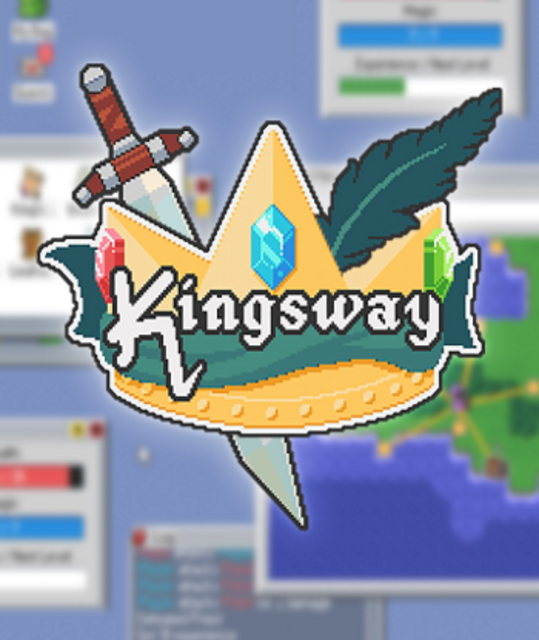