by Patrick Klepek on October 1, 2012
Share:TwitterFacebookReddit

For a game that sounds like the setup for a bad SyFy film, Tokyo Jungle is a well-designed, supremely funny video game well worth your time.

Tokyo Jungle is so much more than a “wacky game from Japan.” It would be easy to enjoy Tokyo Jungle ironically, but the reason I’ve sunk more than 15 hours into a dog-on-cat-on-dinosaur-on-hippo world where humanity no longer exists is because Tokyo Jungle also happens to be a good game.

Though traditional roguelike fans may bristle at the comparison, it’s the easiest shorthand to explain the game’s central gameplay loop, the survival mode. Players are dropped in, and do as the mode suggests: stay alive. Besides just living longer, there are various challenges to keep you motivated, from consuming a set amount of calories to taking over a location by marking various spots. These sessions last anywhere from 15-to-30 minutes, since the game will inevitably spawn a supremely powerful beast into the world, who will totally wreck you. Plus, since the challenges aren't that varied, I often found myself playing only as far as unlocking the next animal before purposely dying. You can, however, save instead of mating and come back if you're having a good run.

Unlocking the animals is the real hook here, since so many of ‘em play differently. An enormous list of animals greets you at the start, though most are locked away, requiring completion of animal-specific challenges. The animals are divided into two types--herbivore, carnivore--and require two different playstyles for success. Carnivores are stronger, combat-reliant animals, and you’ll need to become intimately familiar with the elegant counterattack system to survive. Herbivores want to avoid combat all costs, and must use their double jump ability to reach out-of-place environmental structures to slink around. The differing styles helps keep the gameplay fresh, a feeling compounded by random events that trigger each time you play. Sometimes a location will become poisoned, sometimes food will disappear, sometimes rain will obscure your vision, and sometimes all of those will happen at once, and turn a great run into an utter disaster. You’re balancing these random elements against other competing factors, including the 15-year lifespan of your animal, which forces you to mate and produce offspring, and having to constantly eat to avoid starving.

One advantage you do have is loot. Yeah, loot. Boxes will randomly appear in the world with items helpful for the moment (flea shampoo to remove fleas, which slow you down, or pet medicine to restore your life), and gear to boost various stats (my favorite is the hip-hop shirt that improves attack) or provide unique benefits (a headlamp to see further in the dark). The name, look, and description of items are hysterical, but the big problem is that loot doesn’t show up nearly enough. I’d sometimes go two or three runs without a new piece of gear, and there’s a ton of gear in this game, according to the in-game store. And since most of my time in Tokyo Jungle was simply spent playing just long enough to unlock the next animal, the gear didn’t really provide much of an advantage. Players looking to survive for 50 or 75 years, a requirement for some of the harder trophies, will probably get much more out of it.

There is also a story mode in Tokyo Jungle, and it’s where the game gets even weirder, if you can believe it. Collecting three story drops in the survival mode will unlock diary entries that help explain what happened to mankind. The story mode begins as a series of short tales about the various animal factions interacting with one another, while eventually coughing up a direct explanation for Tokyo Jungle’s whole premise. By the end of the story, you will have a pretty cool, totally insane narrative justification for why there are dinosaurs running around Shinjuku. That Tokyo Jungle even has an explanation for itself is impressive enough, and for it to make enough sense to go “oh, yeah, sure” is even better. It’s too bad the rad creatures that unlock as a consequence of finishing the story are so damn expensive, and there’s no way to earn enough points to unlock them without seriously grinding.

I also take issue with the game locking some of its animals, like the sabertooth and alligator, as downloadable content on PlayStation Network. It’s one thing if Sony wants players to purchase crazy, one-off creatures as additional purchases, but part of the Tokyo Jungle addiction is coming across something crazy on a run, and knowing you’ll eventually be able to patrol the streets as that bad ass. Granted, Tokyo Jungle was a retail product in Japan and it’s just $15 over here as a download, but it’s still poor form, and there are better ways of teasing the player to pay a little more. That said, there are plenty of animals for you to unlock, and 15 hours later, I still don't have access to the dinosaurs.

There are so many other little details that make Tokyo Jungle such a humorous, surprising delight, too. When a set of animals are about to mate, the game fades to black...and the controller rumbles. When you play as a baby chick, there’s no way to mate, because you need to fall asleep...and wake up as a chicken. When the Tosa clan has been battered, beaten, and removed from their home, only to be saved by a compassionate bear who...talks to you. Talks! When you’re presented with a stark morality choice at the end that, no matter what you choose, ends the game on a supremely dark note, you can't help but applaud the game's sheer audacity.

Tokyo Jungle is bold, well-designed, and very funny. One can’t imagine Tokyo Jungle coming from anywhere but Japan, and it’s a case where such a statement is an enormous compliment. 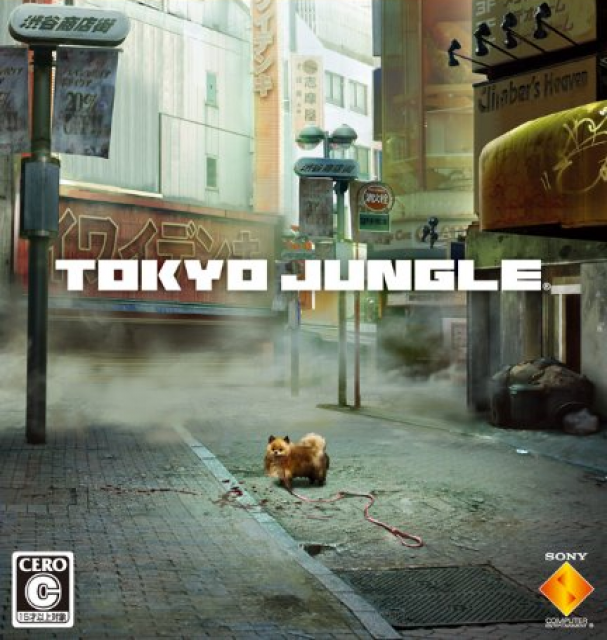