If you were curious about what some of 2014's best indie games might be, Maya Kramer's got you covered.

Maya is a game developer, producer, and freelance PR consultant living in Canada. They spend their time attending video game events, running booths, being outrageously helpful, and lovingly herding indie developers. The rest of their time is spent on Twitter over at @legobutts.

The opportunity to write about your Top 10 Games of the Year sounds like it would be fun. But 10, while being a double digit, is notably the smallest double digit, and choosing just 10 games out of everything I have played in the past 12 months might be one of the most unnecessarily stressful things I've done all year. Those of you who know me know that I pretty much live and breathe indie games--being involved in the community like I am means I generally play games in the early phases of development through their dreaded ship dates. So it's sometimes hard to know the difference between what was "released in 2014" and what "I played nonstop in 2014." (Unless, of course, we're talking about Threes!, which I've had to delete from my phone at least four times in order to ensure I do any work ever in any capacity.) But things like Early Access and Let's Plays blur that line even further. So! With that in mind, I give you: 10 Very Good Games That Maybe Came Out in 2014 or Perhaps are on Early Access or Perhaps Maya Just Played Them a Lot This Past Year, Okay? Here we go.

Comedy games are hard to make. Jazzpunk is really, really good. It lets loose with quick wit, brutal puns, and spot-on voice acting...it's basically like playing through all my favourite Leslie Nielsen movies, and if you're too young to understand what that means, I suggest you stop reading this list and go look up The Naked Gun right now. Please. It's so much more important that you understand Leslie Nielsen's genius. Then you come right back here and play Jazzpunk. Maybe watch the live action trailer as the game is downloading into your Steam library. You know, to brace yourself for what's to come.

Beef. Shock. Horror. Peril. This is without question one of the most ridiculous multiplayer games I have ever played. Oh, it's not out, you say? Suck it up because I don't care. Go watch some Let's Plays and download the old version from April and tell me you aren't totally into squishy marshmallow multiplayer violence. If you get the chance, play with as many players as the version will allow. If you don't cry tears of laughter, you're probably a robot. Remember to hold Y/triangle for the delightful doughy arms-in-air gloating mechanic. The win doesn't count if you aren't a smug asshole about it. Watch for this game's release, you'll want to have it at your next house party.

I've got some anxiety stuff that I deal with in my daily life--lots of us do--and sometimes I have to retreat to a very calm place in order to balance myself out. Fract OSC is my calm, safe, balanced space. I love games that get right to it, let me explore and figure out the world at my own pace. Solving the environmental puzzles in Fract builds the sounds and electronic tracks around you as you explore TRON-like landscapes, and the culmination is one the chillest and most beautiful experiences I've ever had. I love this game so much that after Fract released, I volunteered to help them show their game at E3. It gave me the unique opportunity of watching new players experience something that I hold so dear to my own heart. You'll want to pick up the soundtrack when you're done playing. I'll be going back to this one for a long, long time.

Families are complicated. This one is actually pretty normal. You play a dad! Doing dad stuff. Being an Octopus. Controlling your limbs separately. Avoiding chefs that want to eat you. Raising kids, paying bills, buying groceries. You know. BONUS: if you have a kid around, get them to play multiplayer with you. The only thing better than playing an Octopus Dad is hearing a little kid giggle their face off about it.

The idea of an interactive comic feels obvious to me in an age where tablets are so accessible--but doing it right is something I just can't imagine wrapping my head around properly. FRAMED understands itself, its medium, and its audience. The puzzles are so satisfying, visually difficult yet forgiving enough to keep me interested. Changing the order of the panels changes the outcome of the story, page by page. Again, this sort of thing feels obvious given technology today, and yet I feel like FRAMED is the first to really do it right. Plus it's visually gorgeous. It gives me the same chills as Ghost Trick did when I first played it. I don't compare many things to Ghost Trick. FRAMED is totally deserving.

Self described as "meditative space strategy", Rymdkapsel is one of the few tower defense like games that I truly love. The goals are relatively simple--manage and harvest resources, build a tiny army, and defend yourself against waves of attacks from outside your base. It's smooth in nature, minimalist with a pretty palette and a weirdly satisfying tetris-like base building mechanic. Oh, and it has the the cutest little minions you've ever seen, although don't ask me how a tiny white column can be so friggin' adorable. I mourn those little friends every time I lose one. Even weirder, sometimes their AI is really scatterbrained, and while this normally would piss me off in a game that relies so heavily on efficient use of time, when these little ones royally mess up I sort of just sigh and revel in their charm. Awww.

Most games have tutorials, and if they don't have tutorials they at least have instructions, and if they don't have instructions they have some form of readable language that informs you as to what you need to do in order to "win" the game. Oquonie has none of these things, and I love every part of that. The character design is outrageously stunning, the story is completely unknowable, and the journey is surreal and bizarre through maps that only an open mind can parse. Everything I'd expect from surrealist designer Aliceffekt. My sort of strange.

It's just like Frogger, they said. Play it, you'll like it, they said. WHY? WHY ARE THERE SO MANY ROADS? Where are these drivers going? Also, who built all these train tracks next to each other?! HOW ARE THE LOGS FLOATING IN DIFFERENT DIRECTIONS ON THE SAME STREAM?! What do you mean I'm playing as a duck but I can't swim!? Are you even kidding me, WHERE DID THAT EAGLE COME FROM... for the record the developers haven't responded to any of my one hundred thousand very politely worded inquiries, and meanwhile I still haven't unlocked the flea which is clearly the best character. But there's nothing quite like the smug satisfaction of hopping over a friend's leaderboard score on the road, only to be hit by an oncoming train. Hubris.

I'd describe Desert Golfing as "Procedural Frustration" but that would make it sound like I'm not completely obsessed with getting that wretched ball in the god forsaken hole in infuriating par or less, at least a thousand times. At least. A thousand. Times. In fact, the game doesn't even really get going until the thousandth hole when you can finally access the leaderboards and see how terrible your friends also are at the game. I'm pretty sure the developer Justin told me that the game is inspired by Penn and Teller's Desert Bus, and the overall futility of the game really nails the sentiment if so--endless holes in endless desert with seemingly impossible holes. Wait, I just got what's going on here. I'm a masochist.

Keep Talking and Nobody Explodes

I've been sitting here for days trying to decide whether to include a game that hasn't released yet on my list. I know, I included Gang Beasts--but this one relies on hardware that's not even out yet. The thing is, it's just too good and too brilliant to leave off, and if you haven't heard of it I need you to listen to me when I say that Keep Talking is my favourite game of 2014. It's a two or more player game, where one party wears a VR device, say an Oculus, and the other parties sit at a table. The person wearing the Oculus sits in front of a bomb. The bomb is activated. The bomb is going to explode if nothing is done. Unfortunately, the instructions to defuse said bomb aren't with the Oculus wearer--they're with the parties sitting at the table. Defusing a bomb is no simple task, and the creators of Keep Talking and Nobody Explodes have gone out of their way to make sure these instructions are as confusing and convoluted as is humanly possible. Here, it's hard to depict through words, so watch a video of people playing. If you liked Spaceteam, you're going to get a huge kick out of this one. Keep your eyes open for it next year, I have a feeling you'll be seeing more of it. 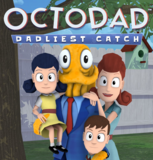 In this sequel to the indie classic, Octodad returns, to live an idyllic life with his wife and children that would be absolutely perfect aside from the fact that he's an octopus. Fortunately, thanks to his clever disguises, nobody suspects a thing...