by Patrick Klepek on November 29, 2012
Share:TwitterFacebookReddit

Get a whole slew of really terrific games for whatever you want to pay.

UPDATE: I heard back from Humble Bundle. Here's what the promotion's co-founder, John Graham, had to say about THQ.

"We're hopefully going to raise a huge amount of money for charity and expose a ton of new customers to the Humble Bundle model. We are debuting more games for Mac and Linux (and Android -- and even an eBook!) and this will just help us continue to do so. We are humbly hopeful that our customers will see this as a good thing instead of a permanent departure from what we have done and will continue to do."

Given its current financial state (read: super bad!), who knows how long much longer THQ will be around as a publisher. If you somehow missed out on some of its great games from the past few years, though, THQ has partnered with Humble Bundle to offer ‘em for cheaps, and raise money for charity in the process.

As with all Humble Bundles, this is helping raise money for charity, though how much goes to THQ versus charity is up to you. The two charities involved are Penny Arcade’s Child’s Play and the American Red Cross. To date, Humble Bundle has raised a whopping $7.85 million. Pretty crazy! You can also “tip” the Humble Bundle to cover bandwidth costs and keep the promotion going in the future.

A rather heated discussion has since opened up on Twitter about a big, if troubled, corporation like THQ participating in the Humble Bundle. Often, it feels good to buy from the Humble Bundle because the profits are directly going to the people who created the games. You could argue this is helping paychecks continue flowing at THQ, but that’s not something THQ makes explicit (what big company would?), and so people are raising their eyebrows.

I’ve asked the folks behind Humble Bundle for comment, and I’ll let you know if I hear back.

In any case, my god, please play Metro 2033, and please play it with the Russian language setting flipped on. You feel like a stranger in a strange land, and the atmosphere completely engulfs you into its weird setting.

Hit up THQ's bundle over at www.humblebundle.com. 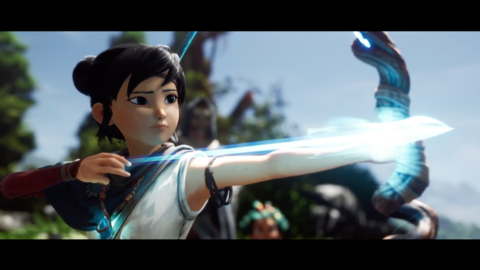 E3 2021: A Behind the Scenes Look at Kena: Bridge of Spirits

Opposing Fronts is a stand alone expansion to the award winning PC game Company of Heroes and includes two new factions: the British and the Panzer Elite. Each faction includes a campaign and introduces new units and abilities to both singleplayer and multiplayer.