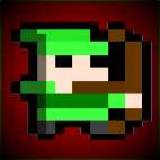 I guess I want to start this out by saying, Thank you Ryan Davis for being an awesome guy, and such a major part of my childhood into early adulthood. I've followed Jeff and Ryan since their days at Gamespot, and I owe a major part of my personality to those guys. I will greatly miss that man, and even though I never met him I can't but feel like I lost a friend. So with that being said, here it is, my first blog. Funny it has to be something as controversial as a Top Ten List. I feel like even though a lot of people will disagree with a few things on my list, it was what I felt in the moment, not to mention the fact that all of this is my opinion. I know my grammar and spelling isn't awesome(Not an English major) so forgive me if something sounds weird. I'll have my wife look over it to save you from some of it. Thank you guys, this community is special to me in so many ways and you duders get me through a lot.

What a weird game. Can you call it that? There isn’t much game-play. I mean, you move around in a 3D world but does that make it a game? Not my place to say I guess, so I’m not going to debate that point any further. What I loved about this game is the fact that it was so nicely laid out(maybe a little too tightly) and it really made me feel like I was naturally falling into the places I needed to allow the story to make sense to me. The subject matter is something I can appreciate on a fundamental level even if I can’t relate directly. I’m sure we all know someone who has dealt with something similar and I really love the story for being “real”.

Much like Rogue Legacy, this was a chill me out game, as odd as that sounds. How could you just chill out and play a game so intense some would ask. Well, when you don’t take it too seriously you will find that the deaths are just as entertaining as the rest of the game. I still haven’t finished it and that is okay because completing this game was never my goal. Watching my little explorer get himself killed countless times over satisfied me enough. Maybe I’m a Sociopath...oh well.

8.)Brothers: A Tale of Two Sons

I guess there is 7 games this year better than brothers, so I guess I could say Brad was right. Brothers is a game that doesn’t deserve as much praise at it was getting but, it shouldn’t be outright forgotten. We all have gotten a laugh at Brads expense but I do agree it has a beautiful story and some of the most breathtaking scenes I’ve seen in a game in a while. Many won't like the games controls but, by the end, I was enjoying the game immensely. Specifically the rope on a bridge part(hope that isn’t too spoilery). Try it out, sit on every bench and when you're done, try not to give brad too much shit.

Free to play used to be the trend I hated most about gaming, but in the past year or so it seems developers are starting to get it right. Path of Exile, if you haven't played, is a Diablo-like game with a FFX like upgrade tree and a FFVII like materia system for skills and spells. SOUNDS CRAZY I know. I thought the same thing, but you would be amazed at how well it works. The Classes are nothing to write home about but with as much customization as this game allows, you can pretty much make whatever you want anyways. If you want a mage with a sword go for it. If you want a rogue who can shoot fireballs, why not. Maybe a Warrior with all the heals of a paladin, its got that too. Try it out I bet you will like it, if not well, at least it was free.

I have poured countless hours into this title this year since it was released. This was my turned on Unprofessional Fridays/Bombcast, sit back, listen, and chill game. IT IS SO MUCH FUN. Its hard in all the right ways, and punish's you/rewards you AT THE SAME TIME. The awesome upgrade trees, equipment, and class's aren't the only thing that kept me coming back. The bosses and encounters are pretty damn great, too. Its titles like these that make me glad that the independent scene is so hot right now. It allows for developers to make the games I love to play, the games of my childhood.

What a roller-coaster this game has put me on(No pun intended...okay maybe). I didn't like playing this game at first and by the end I was singing its praises. I love the story at first then I hated it, then I loved it again. My wife had to listen to me talk about the complexity of its ending and the lack there-in for weeks after I completed it. All in all I have come to realize I don't want to play it again even though I loved it overall. Its a weird mix of emotions and I've always said if it makes me think this much, good or bad, it had effected me and that alone puts me in a spot where I couldn't see it not being on my list. Its a game I think everyone should play, even if you don't enjoy it. I think it is important to know why you don't.

Fire Emblem Awakening had one of dumbest stories I have seen in a while...TIME TRAVEL NEVER GOOD...but it was dumb in a way I could appreciate. It was funny, cute, and enduring. Don't think it to be a cutesy RPG though, this game has some twist that will make you say DAMN, shit just got real and every time one of your favorite characters suffers a killing blow, you cant help but shed a tear. It has some of the my favorite character interactions in any RPG and, not since Persona 4 have I cared so much about cultivating relationships in a game (gotta get those S Ranks Bro). As for game-play, you won't find a more solid, fair, and infuriating battle systems other than X-COM any where else.

I really feel like this game got a bad rap this year. It was done a disservice by the very people who made it. By turning the conversation into something I feel like the game doesn't back up at all, it kept people from enjoying what the game really has to offer. That still however didn't keep me from loving this game. The shooting was fun, story was basically a summer action movie, and Lara is a badass. I wish the actual "TOMB RAIDING" was a bigger part of the game but ill give it a pass because it had one of the best Bows of 2013(The Year of the Bow), and trust me the 8Bit_Archer knows his bows.

Luigi's Mansion 2 hits me right in the nostalgia factory, I am a fan of the original and nothing quite gets my heart a pumping like the music in these games. Don't even get me started, when I first played the original I found my self humming along, and then when I realized that Luigi was humming the the tune also, from that point on I was hooked. The original I finished in one sitting and I never felt like it overstayed its welcome. That leads me to what I think is the major flaw of LM2. It goes on for a really long time. It was fun and the music was great but it didn't have enough stuff to do, to justify its length. With all that being said, it still has one of the best theme tunes Nintendo has ever done.

1.)Ni No Kuni: Wrath Of the White Witch

This game reinvigorated the part of me that started loving games in the first place. It put a fresh fire back into my overly-cynical heart and has caused me to flip-flop my views on gaming multiple times this year. I love the story the art and the characters, not everyday a RPG like this comes around....it truly is special to me. I want to be honest however, I haven't finished this game. I have fought myself many times this year. The adult me wants to say "you don't have the time, you have two kids and a wife and all your gaming consist of a few hours on the weekends, so why not forget it and play something shorter." but the child in me screams out "this is everything you ever wanted when you were a kid, a fully realized, beautifully rendered world, with characters who truly are interesting, likable, and innocent." This is something I feel like gaming has lost, an innocence. Don't get me wrong, I love a good go in DAYZ from time to time but, sometimes I want to forget about being an adult with responsibilities and just be a freaking kid again. I'm in the process of finishing it now and even though this game struggles with grinding issues, it never loses its soul, which in my opinion, is truly breathtaking. I know that I may have not explained why exactly this game made it to the top spot for some of you, but if I hadn't, the kid in me would never forgive me. This game did something to me this year, and even if no one else out there understands it, I do, and that is all that matters.

Thank you guys again for being an AWESOME community and I'm looking forward to another year.