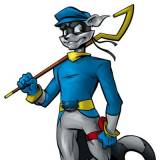 This is an article I wrote a little while back about semi-obscure games that had a big influence on the industry. I may make more of these articles in the future if demand is high enough.
Chances are in the last 5 years you have played a 3rd person cover based shooter, unless you have been in a coma (in which case you have missed a lot of important stuff like they made a sequel to Tron!). It is sometimes hard to remember when 3rd person shooters involved running and jumping guns ablazing while soaking up bullets like some sort of guy who runs around a lot and is impervious to bullets. But one game turned the genre on its head and made you have to avoid bullets so you wouldn't be ripped to shreds in a second by ducking behind dumpsters and wait for an opportunity to strike making you more like an actual soldier than a secret super soldier... even though you were playing as a secret super soldier. That game is Kill.Switch.

Developed by Namco in 2003 and released for PS2, Xbox, and PC, Kill Switch released to little fanfare and critics gave it lukewarm reviews. Jeff Gerstmann summed it best when he call it an “... otherwise ordinary-to-a-fault action game... given a shot in the arm by its relatively cool gameplay techniques, which--atleast--make the games short ride interesting.” The “cool gameplay techniques” Jeff refers to are the cover system and the ability to “blindfire”, which originated in Kill.Switch. The cover system, which took inspiration from Namco’s own Time Crisis series but allowed players to move and take cover in 3rd person, influenced Cliff Bleszinski and Epic’s work on Gears of War and the Lead Designer on Kill.Switch was even hired by Epic. Uncharted: Drake’s Fortune Lead Designers Amy Hennig and Evan Wells have also said to have been inspired by Kill.Switch’s cover system when designing the cover system for Uncharted. “Blindfire” is a staple of the genre which allows players to fire over cover without aiming but at the expense of being wildly inaccurate. While a relatively minor thing, the ability to “blindfire” is something vital to cover based shooters and it is impossible to imagine ,as a player, not having the ability to freak out and waste all our ammo on a single guy.

Kill.Switch was not without it’s faults. The game was horrendously short, clocking in at about 5 hours, and once you beat it there was not much else to do. The story was equally bad and made little to no sense. The game lacked variety and got repetitive fast as you pretty much fought the same enemy encounter throughout the whole game with only the occasional lackluster boss fight to break up the monotony. Also the game suffered from a terrible name and an equally terrible tagline “Take Cover. Take Aim. Take Over.” Combine all this with a generic look and its easy to see why this game has been dismissed by most people.

Many games have come along and have done what Kill.Switch aimed to do bigger and better, but that is no reason to dismiss it from history. Beneath the terrible story, short campaign, generic graphics, stupid name, and numerous other problems lies a seed of awesome that has sprouted into one of biggest genres in gaming. Without Kill.Switch the gaming world would be a much different and sadder place. Kill.Switch helped make the gaming world what it is today and its influence can be seen in many projects that are coming out this year. How many other games can claim that?

Note: I was in the doctor's office for like 3 hours when I came up with this. Keep That in mind.

I just discovered the horrible meaning to Rebecca Black's Friday.


NOT FUN FUN FUN AT ALL!

Cityville on the Edge of Forever: Day 1 Ozztopia is Born


When I booted up Cityville I was greeted by Samantha who I guess is my sort of guide through the game. First I got to name my city so I went with Ozztopia because my nick name is Ozz… and it will be a Topia. Samantha taught me the resources I will be using to bring my city to Topia status. Money is used to buy thing, goods are used to supply your businesses, and experience is what makes you level up and get more stuff to build.  I started setting up small cottages which brought the first few people to Ozztopia and since these people needed things to do why they lived in my city I built a bakery and a toy store. So far naming my businesses has been my favorite part of the game but i cant really explain. Having a toy store named “Toys Don’t Cry” and a bakery called “Bakepocalypse Now!” is just kinda cool I guess. Anyway, One of the things that surprsed me is how much I have to click. If you want to collect income, supply your businesses, or do pretty much everything else. This has made me turn into a chronic cityville checker, forcing me to go onto any computer I can latch on to in order to collect my money and make sure I am not wasting my time. This at least helps me understand why people are so addicted to these Zynga games, because they screw you over and punish you for having a life. Another huge component of the game is having neighbors, which you accomplish by getting your friends to give up their lives and join you in Cityville. In order to be successful you need friends because you have to use them to fill Community Buildings in order to expand your towns population, or risk having to spend ACTUAL MONEY to fill these positions! I caught about 7 of my friends in this evil death trap through asking them to help me or posting every single accomplishment on my Facebook Wall. I feel like a dick for doing this to them and sending all these useless messages that have no meaning, but this is payback in a way for when they did it to me atleast that’s how I justify it. I am getting more and more people every few hours, proving these ‘Ville are like a horrible virus that destroys your life and your friends lives

Cityville on the Edge of Forever: Introduction

This is a new blog I am starting on   http://cityvilleisdeath.tumblr.com/ documenting myself playing the newest Zynga sensation and my subsequent descent into madness

Facebook used to be a place for friends to connect, a place for photos of varying degrees of tastefulness, and a place to stalk that girl you met at the part the night before (don’t deny it!). On February 4th, 2010 something changed all that, something no one ever expected… a farming simulator. Farmville quickly became an Internet sensation and making the games developer Zynga a multi-million dollar company overnight. This led to a social gaming revolution that has consumed millions of people across the world. I, Nick Osborne AKA Ozz, have watched from the sidelines curiously as my wall has filled with people asking for cows, spreading the news of their brand new tractor, and spent hundreds of dollars on something as small as a virtual goose. This month however one of these Zynga games caught my eye, It was called Cityville and in less than a month it was being played by 41 million people… 41 MILLION PEOPLE! As I sat gazing on that unimaginable number, I decided that I must know what all the hub bub was about and thus Ozztopia was born.

I heard you got a quest like this. Sorry yo any one reading this I will try to add something awesome at the bottom

So far so good for E3 2010. Microsoft's press conference kinda sucked but Ea's more than made up for it. I mean a battlefield expansion, criterion developed need for speed, and Medal of Honor! Things will definitely pick up tomorrow with so maybe I will write more then.

Made a band with my buddies!

Kinda doing this for a quest, but I should tell you guys anyway. My 4 friends and I put a band together. They are all super talented musician, but I am not. I am singing, playing synth, and most likely writing all the songs. Right now we are called "Waves of Warning"(suggestions are permitted if u got something better) because my name "Sharks on Stilts" was shot down. My friends obviously cant appreciate awesomeness, but I will move on. We are going to be playing upbeat indie music most likely but that may change since we have only practiced once at the time of this writing. When we start recording stuff I will be sure to show everyone on here first. Long Live Rock!!

I called the quest system!

Several months ago I made a forum Achievements you wish you would get while on Giant Bomb. My dream has come true today! Just a thought maybe we canuse this forum to suggest new quest or maybe create a new one to suggest quest.

Back by poular demand, this FRIDAY MARCH 26 there will be a Bombing Run! Me and Goran will hopefully both be there unless outside issues prevent us to( which is what happened last time FYI) add mine or Goran's GT and join at about 6pm  EST. I will probably be on earlier so there will be reason to get on before them. hopefully this one will work out. Both start at 6pm EST but will go vvery late so dont be afraid to come later.PC info here


I love Giant Bomb. What drew me to it was how unigue it was. Having been on Gamespot for years I was ready for something new. The personality in the writing, the great staff, and my favorite the video content. The quick looks were what changed the game for me. Seeing a game in its most pure form, without all the PR and bias of video previews on other sites. Call me naive, but I thought this would keep Giant Bomb different from other gaming sites for a long time. Now Gamespot and Destructoid have each launched there own video series that show the first ten minutes of a game being played with commentary by editors. Sound Familar. I dont find any problems with this, but it is obvious that other sites are paying attention to Giant Bomb and emulating some of it's best features. What I am wondering is "Do you think Giant Bomb is losing what made it standout in the first place?" and "Do you think that Giant Bomb's style of journalism will become the new norm for gaming sites?" Feedback appreciated
11 Comments