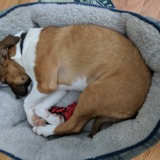 Sekiro failure gang, checking in! I made it super far in that game, and then one boss in particular (Owl) just totally exhausted me. After many attempts with what felt like little to no improvement, I decided I was done with the game. There's too many great games and so little time in my life these days. I can't be bothered to pound my head against the wall for too long before I decide it's time to move on. I did something similar with Cuphead too. I don't think there's any shame in it.

Life is short and time is precious. Play what you love, and love what you play. That's what I say.

@deckard: I wouldn't say that's entirely true. There's been some stinkers for sure, but there's also been some awesome day one releases for the service since its inception.

And the road ahead looks even more promising as well (Hades, The Ascent, Back 4 Blood, MS/Bethesda first party games, etc).

If there's anything to be concerned about with GP its the plethora of live service and co-op games that will take over the service. You know, the sort of games that entice people to continue to subscribe and/or purchase the game when it leaves gamepass as opposed to linear/narrative games where you can easily cancel a subscription once you've finished it.

Haha oh no. My buddies and I thought this might be a dumb, fun game to mess around in tonight. Looks like maybe we should find something else to play instead :|

The Falconeer has some cool concepts and good low-key chill vibes despite having a lot of warts around its execution.

Another thing you need to consider is that as you age, you’re gonna pick up on different themes that may not have resonated with you at all at a younger age. I don’t have proof of this, but I’m sure there’s plenty of teenagers out there that enjoyed GoW for simply for its big snakes, axes and blood.

I’m excited. If we’re getting stuff even remotely close to NoClip then I’m a happy camper.

@theadmin: I just looked at the timing of this show. I wonder if Microsoft's presser will only by 60 minutes? Otherwise, those two conferences will overlap which isn't something I think happens very often (if ever). Though the PC Gaming show, as you joked about, is certainly overlooked by a lot of folks.

I uninstalled the game after just a couple hours because I thought that it felt like garbage to play. Bummer too cause I was really looking forward to it.

@av_gamer: Not sure if this is enough for you, but this just got announced a couple of hours ago: