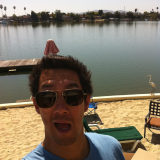 My Time on the Slopes With SSX

I recently came back from 2 hour hands-on event at EA Redwood Shores where I was lucky enough to spend some time with the new SSX. For those interested, I'd like to share some early impressions of one my most highly anticipated games of 2012.

I love snowboarding. I love the SSX franchise. I've played every game in the franchise with the exception of Blur and the NGage game they released. IMHO, the crown jewel in the franchise is SSX3. They took what they learned from Tricky and merged it with the feeling of being a part of a living mountain community.

Personally, I felt that SSX On Tour was a departure from what made SSX3 so great. The control scheme wasn't great, the frame rate suffered (on the PS2 at least), and the tracks and mountain weren't all that interesting. It had a very disjointed feel and it seemed like a different team had gotten their hands on it and tried to make a game they thought would be edgier and more punk (and thus more marketable?). This comes across in the HUD/Menu Design/Box Art/Music/UberTricks and needless to say, I was disappointed.

It has taken almost 7 years for EA to reboot and rethink the direction of the SSX franchise.... and I have been eating up every trailer, image and interview Todd Batty and team have been leaking. That said, I was ecstatic when Ryan invited me to head out with him and Vinny to get my hands on their latest build. Below are some initial thoughts and reactions from my brief experience (~2 hours) with the game.

There were two control schemes implemented in the build I played: 'Classic' and 'New'. I've been playing a fair amount of SSX3/Tricky on the PS2 lately, so I almost immediately switched to the 'Classic' controls. While there are a few new gameplay mechanics to contend with (launching your wingsuit, using the rewind feature, etc.), the controls should feel right at home to any SSX vet.

Having said that, the 'feel' of the controls is much less precise than previous games. It could have been that I was playing with a leveled down character or boards that didn't carve as well as gear you get later in the game, but the turning felt very touchy (like you almost had to feather your way around turns) and boosting seemed to knock me off my line in some cases. Conor Dougan, the producer who was showing us the game didn't seem to have any issues with it. So I assume this is something a player would get used to given some time with the game.

In our interview, Conor intimated that they were trying to make the game act and respond like it was 'Burnout on snow' -- and the gameplay definitely reflects this. In SSX3 and Tricky, you could press back on the analog stick and come to a complete stop on the mountain. This game by contrast, feels like it is relentlessly propelling you down each run. It is a constant sensory overload of motion blur and HUD elements as you boost your way to the next feature. It's this constant feeling of teetering on the edge of control that adds an element of tension to the gameplay -- and makes the lines that Conor was attempting in the quicklook seem that much more impressive. I'm still a fan of the control and precision provided in SSX3, but can understand the modernization of the gameplay in this regard. Special notes are broken out below:

There are an overwhelming number of tracks in this game -- and that fact gives me a warm feeling inside. There are 9 regions, ~3 mountains per region, and multiple runs and drop points per mountain. There is definite variety between each region as they each have their own look and feel that shines through in the track design. It should be more than enough to keep even the most diehard player satisfied for months to come. Keep your fingers crossed for dlc regions.

I should also mention that each track I played seem to funnel you down the mountain. Hard. I never came across an open expanse of terrain such as 'Happiness' (from SSX3) and I didn't come across any alternate routes in any of the courses I tried.

Also worth noting are the the 'Survive It' tracks. Each region has its own survival run and they are as fun as they are challenging. Each run has a unique survival mechanic you must navigate as well as equip special gear before you attempt it. These survival mechanics range from massive crevasses you have to use your wing suit to clear to a near blind white out scenario in which you have to use pulse goggles to make your way down. Each scenario is distinct and fits well with its own specific region.

The sound in the new SSX is amazing. This was probably my favorite part of the entire experience. If you like dubstep, you'll be in hog heaven. If not, don't sweat it, there are plenty of catchy breakbeats to ride to -- we're told you can even upload your own tracks which are remixed on the fly (we didn't have the time to experience that). For a more detailed look at the sound design, check out this video.

The team has done quite a bit of work on the multiplayer aspect of the game and it shows in spades. They ripped a fair amount of features from Need For Speed HP (such as the wall, challenges, etc) and added a handful of unique mechanics on top of it. The most notable of these RiderNet, yet the most interesting to me was the geotagging system, which allows users to hide (earned) geotags on any run. These tags sit and earn in-game credits until they are picked up by another rider. Conor described them as 'User Generated Collectables' and that shit is pretty f*cking brilliant.

There are so many components to the multiplayer that you're better off watching the first few minutes of the quicklook to hear Conor contextualize it.

So where does this leave us. If you're a fan of the series I believe its a must have game. We've been waiting almost 8 years for a proper sequel to SSX3 and while this might not be what you were expecting, its a fantastic package and the multiplayer challenges provides more than enough incentive for you to dive deep and get really good at the game.

As for me, my pre-order should be arriving late February, so I better find a solution for my red ringed 360 ASAP!

See you duders on the slopes :)

And check out the quicklook if you are still on the fence.

A number of you have requested that the flood restriction on wall posts be lifted (especially, those of you who use your walls to go back and forth with other users).

We've heard your cries and have modified that feature accordingly.

No more than two wall posts could be made from one user to another (in a row) within a 48 hour time period.

As long as received posts are approved by the recipient, a user may create as many wall posts (in a row) as needed (to the same user).

As always, enjoy and let us know if you find any bugs :)

We just deployed a very small patch that:

Not huge changes, but should be a nice tweak for those of you who use the wall to communicate with other duders :)

I know, you read that title and you're all, "WTF, 500 error pages suck! What could you do to possibly make them better?" Well, we log each and every single one of those errors using a great open source tool called Sentry. Sentry then groups these errors and sorts them in a dashboard so we can quickly identify and fix some of the more frequently occurring bugs. Unfortunately, the smaller errors tend to get buried and it wasn't possible to identify and track down a single, specific error that one of you may have experienced.

That has all changed with this most recent patch. Now, when you experience a 500 error you should receive an ID (hex format) at the bottom of the page which you can reference when reporting the bug to a staff user, moderator or in the bug reporting forum.

This patch will most likely go out with our next deploy, so keep an eye out and please reference these IDs it when reporting bugs from now on. Thanks for all of your support guys, we love you. Hard.

Who is the psycho who is beating me to the punch when it comes to completing new Quest Sets that I AM DEPLOYING!

Just launched a new gnarly-bro extreme quest set on GiantBomb. Check it out and see how long it takes to complete -- we changed this quest up a little bit and would appreciate any feedback you have :)

Hey - you guys remember those E3 lists you were creating last week during E3? Well, I took the liberty of compiling that data. Here it is for you duders:

Did you create a list? Are these the games you were expecting to show up?
Thanks to everyone who participated - its kinda cool to see the data :)
42 Comments

A big thank you to everyone who has PM'd me regarding the 775 Quest Set. Your feedback was very much appreciated and it was good to get a consensus of the sentiment around that particular set.

I have in fact received so many PMs that it isn't feasible to reply to each of you individually - and for that I apologize.

While we realize that many of you were bummed by the (very) limited availability of that Quest Set, we feel that it would be against the spirit the Quest System to retro-actively award users with a quest that they did not naturally unlock. While we sincerely sympathize with those of you who feel short-changed by the 755 set, please remember that the Quest System is all in good fun - and the 775 set in particular was more the result of an inside joke than an actual, challenging set.

Bottom line - we will not be retro-actively awarding the 775 set to anyone outside of the 775 community members who unlocked it.... However, your feedback regarding this Quest Set will serve to guide future quests and their exclusivity at launch. Thanks to everyone who took the time to PM me - this is why I love GB.