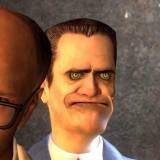 Another review posted up, this time Blur which I was very impressed by.

In a blatent attempt at finishing quests I wrote a review, something I swore I wouldn't do after a few soul destroying years of doing it for a living. Feel free to check it out. :)

Spent the morning updating wiki pages of pretty obscure stuff...WHYYYYYYYYYY Giantbomb!? WHY DO YOU MAKE ME DO THESE POINTLESS THINGS.

Twice today I tried to start a topic and my router dropped connection just as I sent wigging out where I sent it to and how many times.

Perspective – Why PC Gaming Is Dying

There’s a psychological experiment which tests child development which has for some reason stuck with me. It involves a child and a few toy dolls and a ball with the ball sitting in the middle and the child is asked where doll 2 thinks the ball is, which is answered as the middle. There are then told that when doll 2 is away doll 2 takes the ball and puts it behind  it’s back…doll 2 comes back and is asked where does doll 2 think the ball is. Up until a development stage the child will say that doll 2 knows where the ball is because they haven’t developed to a stage where they see themselves being in a world where others operate independently with their own experiences and without your knowledge and drive.

I fear from reading website comment sections that a large percentage of the internet would fail this test and be relegated to being on par with a 3 year old. I realise that reading comment sections is possibly the most idiotic thing one can do and that I shouldn’t be surprised by stupidity on the internet but lord almighty the IQ of the internet has dipped lately. I was reading several articles about Ubisoft’s DRM policy. I went to Edge, Joystiq, Kotaku, Eurogamer and 1up which are my usual haunts and they were all chatting about how Ubisoft are defending their DRM which requires a constant net connection to play. The comments were overwhelmingly negative. Now that’s fine, any DRM which inhibits features of the game should be criticised and not letting people play it offline is remarkably restrictive. My issue was the level or hate towards DRM in general and the level of entitlement.

“Do they expect people to actually buy their games after this”

From the user perspective they are being screwed with the legitimate consumer paying the price for the pirate. However as the PC gamer isn’t seeing the problem from doll 2′s perspective…doll 2 being our friendly neighborhood developer. This fellow spends 2 years making a game, building an engine and spending millions to produce a quality entertainment product. That product is then leaked online and is on torrent sites before launch. So your sales in the already beleaguered PC industry are hit before launch. You then have to provide servers, tech support and general customer service to said pirates…again eating into profits. Your sales go down and the publisher doesn’t commission a sequel as you sold the square-root of jack shit. You are fired and make a new studio making a new game and slowly but surely you arrive where you once were but this time you protect it with DRM. You are slammed for it and get even more pirate rates than before in protest of you protecting your IP. Out of business and destitute you commit suicide by jumping off a bridge and landing ironically on a GAME delivery lorry.

To those who claim that no DRM would end piracy I point you to World of Goo which had no DRM and a low price point to boot and it had 90% piracy. The problem is in the view PC gamers have of themselves as being the saviours of gaming and a group catered to, as if it’s their right to have gaming tailored to them. Look at the uproar when games lead SKU’s are console or when they have to god forbid pay console prices for their games. It’s all a matter of perspective and PC gamers perceive that it’s their right to be entertained. It’s not though, playing games is a privilege and there is nobody in this industry who has the right to demand how games are packaged and delivered to them. Developers have to deal with a myriad of problems already when making a game, militant gamers who use their willingness to steal a game should not be one of them.